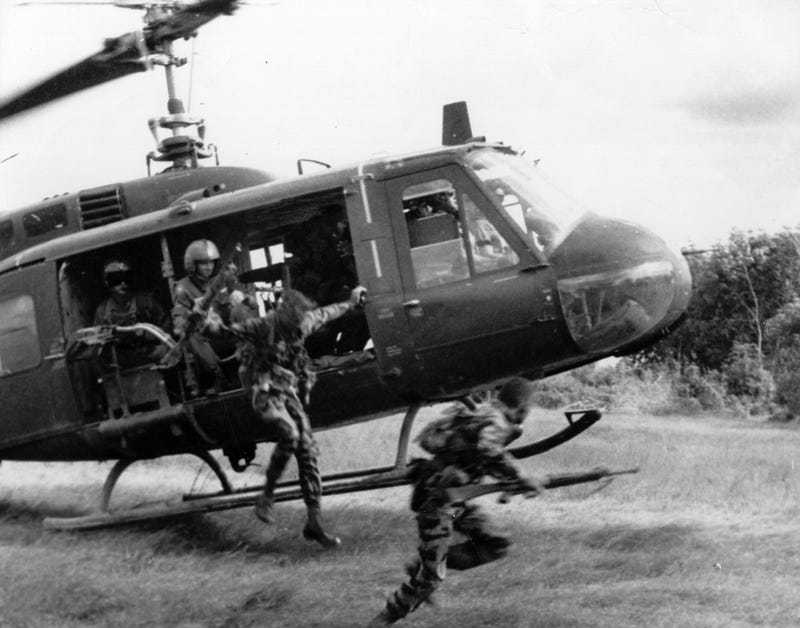 American forces got hit hard in Vietnam in February of 1968 in what became known as the Tet Offensive. Bob Ford was flying his U-H1 D Huey on three missions a day, doing medecav and combat resupply runs for Marines during the battle for Huế. The Marines were being encircled by the enemy and all the other pilots in Ford's small aviation detachment near the demilitarized zone had been killed or wounded during the battle.

"You had to fight a gauntlet of gunfire to get in and out," Ford recalled of those missions into Huế during Tet.

After three days of straight combat missions, he felt his nerves getting the best of him and decided he needed a break. Then the Marines came and found him in his bunk and told him that they needed him to fly another medevac mission. He couldn't turn them down. As he walked towards his helicopter he, "knew things were coming to a screeching halt, I was getting dizzy, it felt like I was walking off a cliff," Ford told Connecting Vets. Then he realized that the M-16 rifle in his hands was violently shaking and only then he did notice that it was because his hands were violently shaking.

Trying to gather his faculties, Ford went looking for other pilots around their base in Da Nang. He felt he might be able to fly if it was with an experienced helicopter pilot. He found a group of fellow Huey pilots and asked for a volunteer. Bart Colburn immediately jumped to his feet, ready for whatever task Ford had for him. Together, they flew the medevac mission and transported more Marines back to safety.

Ford's journey to Vietnam began when he was an ROTC cadet. He saw the war was heating up and asked one of his instructors, a 1st Cavalry veteran where he should go if he wanted to serve. The captain told him to become a helicopter pilot.

"He said it with conviction," Ford recalled. “I said okay, that is exactly what I want to do.”

Ford went to basic training and then to flight school and absolutely fell in love with flying helicopters. Twenty days after graduating flight school he hit the ground in Vietnam. Six weeks later he made aircraft commander and requested to be assigned to a small Huey detachment up north by the DMZ where the action was. They worked autonomously without direction from a higher headquarters. Marines would tell them what they needed, and the pilots would do their best to accommodate those requests.

"We flew for 1st Marine Division, they were the best of the best. 1st ARVN (Vietnamese Army) was up there as well who were also great," Ford said.

Then the Tet Offensive popped off.

"I flew 70 missions during the Tet offensive, medevacked more lieutenants than privates first class because they were leading the fight," he said of the Marines.  "We called them 'high diddle diddle up the middle' because we never found one that didn't want to fight."

“We enjoyed it to tell you the truth and we looked forward to enemy contact," Ford said. "The machine gunners we had were all second-tour infantrymen who volunteered to be our gunners knowing they were going to see daily enemy contact.”

However, during Tet all of the troops were pushed to their limits with soldiers being killed and wounded all day and all night.

Ford was at wit's end when Bart Colburn volunteered to be his co-pilot. They flew for the remaining 13 days of the battle.

"We took hits every day, every hour," Ford said of that time. Years later, Ford would tell Colburn that he saved his life in combat, that he could not have flown those missions without him. Ford recalled an especially hairy mission that Colburn had flown, getting them out of a hot LZ. Colburn was astonished upon hearing this and told him, "my hands never touched the control." It had been Ford flying all along.

In the end, they saved each other.

Ford recently wrote a book about his wartime experiences behind the stick of a Huey called Black Cat 2-1: The True Story of a Vietnam Helicopter Pilot and His Crew. Black Cat 2-1 was his callsign in Vietnam.

"I knew we were doing something exciting at the time and we were proud to be able to fly a war machine like that, it was exhilarating," Ford said. "The reason why I wrote it was to honor all of those who went to Vietnam because that Huey was the symbol of their service, everyone relates it to the Vietnam war. I wanted to honor the Huey helicopter. I would shake the hands of everyone who works for Bell helicopters and I certainly wanted to honor everyone who served our country. The last thing I wanted to do is tell my kids what I did."

Ford's children had always known that he was a Vietnam veteran, but until they read early draft chapters when he was writing his book, they had no idea what he had actually done in the war flying over 1,000 combat missions.