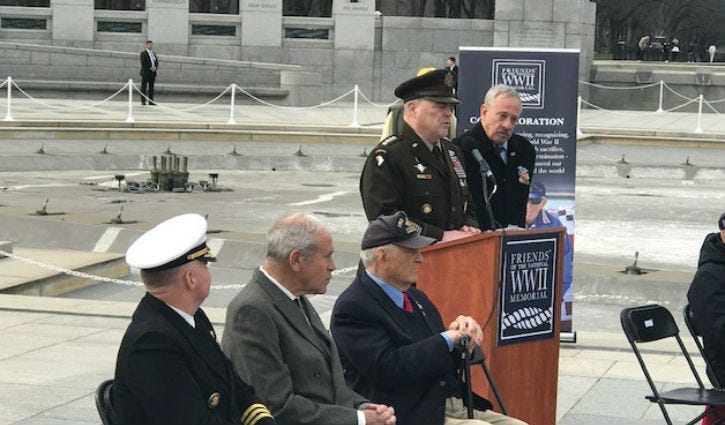 Navy Corpsman Alexander Milley was among the thousands of sailors and Marines who stormed a small island called Iwo Jima in the Pacific Ocean on Feb. 19, 1945.

Seventy-five years later his son, Chairman of the Joint Chiefs of Staff Army Gen. Mark A. Milley, was among those who paid tribute to the veterans of the battle during a ceremony Wednesday at the National World War II Memorial in Washington, D.C.

From December of 1944 to Feb. 19, 1945, Iwo was pounded with more ordnance by the Army Air Corps and Navy than any eight square mile land surface of the earth had ever experienced in military history. Milley said his father and his fellow sailors and Marines who hit the beach were told no one was left alive on the island, that was not the case.

The  Japanese began their attack when the Americans were about 800 meters in.

“They were pinned down on the beach,” Milley said. “They couldn’t get the Marines to shore to reinforce. And then they began slugging it out inch by inch, yard by yard, for the next 36 days, at the cost of almost 7,000 Marine and Navy corpsmen lives.”

“Almost 50 percent casualties were suffered on the island of Iwo Jima,” he said. 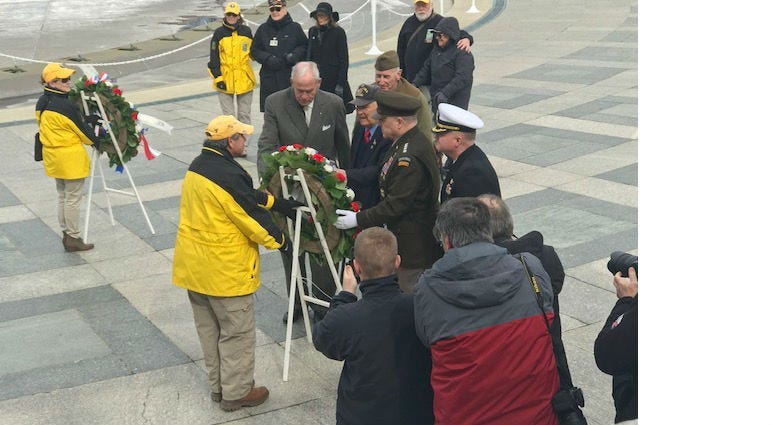 Milley saw the island where his father fought last year.

“He was there all 36 days of the battle,” she said. “His brother was also on the island at the same time and survived, too.”

“It’s very emotional and meaningful,” she said of the ceremony. “What he went through, we can’t even imagine what that was like.”

Zimmerman said every year her family had a Fourth of July celebration at their summer home, but her father would never go to see the fireworks.

“He said I’ve seen enough fireworks to last my entire life,” she said.

Milley said from 1914 to 1945 150 million people worldwide lost their lives as the result of war and that the Greatest Generation established a system of “great power peace” that has lasted for 75 years.

“Let us resolve that we’re never again going to have a great power war because the slaughter that’s involved is beyond the imagination, is beyond the pale,” he said.