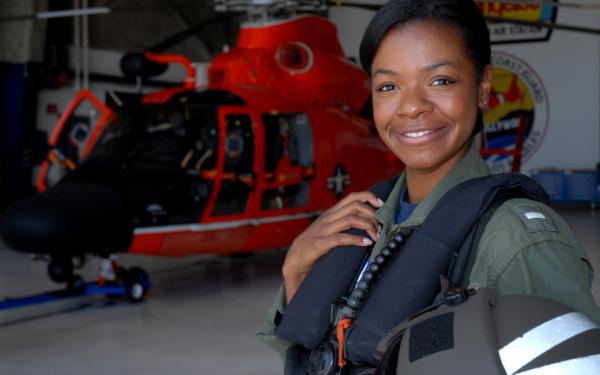 La'Shanda Holmes has had to overcome obstacles her entire life.

She lost her mother to suicide when she was just two and spent her childhood years in foster care.

When she was 17,  she was placed in the care of the couple she calls mom and dad today and went on to attend Spelman College.  It was while she was there pursuing an undergraduate degree in psychology that she was introduced to the Coast Guard.

She applied for and was accepted into the Coast Guard's college student pre-commissioning initiative, which enabled her to pay for college. It was while serving aboard a Coast Guard cutter prior to going to Officer Candidate School that she learned about aviation as a military career path.

But all of that did not stop her from transforming her life and becoming the Coast Guard's first African American female helicopter pilot.

"It sounded challenging, but something I was up for,” Holmes told Spelman. “We did hovering and flying low over the water. I was like a little kid. It was like nothing I had ever done or seen before. It was awesome.”

“Everyone in the aviation community was so close," she said. "There was a real sense of camaraderie of which I wanted to be a part.”

Reach Julia LeDoux at Julia@connectingvets.com.
Want to stay connected to all the stories and resources Connecting Vets has to offer? Click here to sign up for our weekly newsletter.