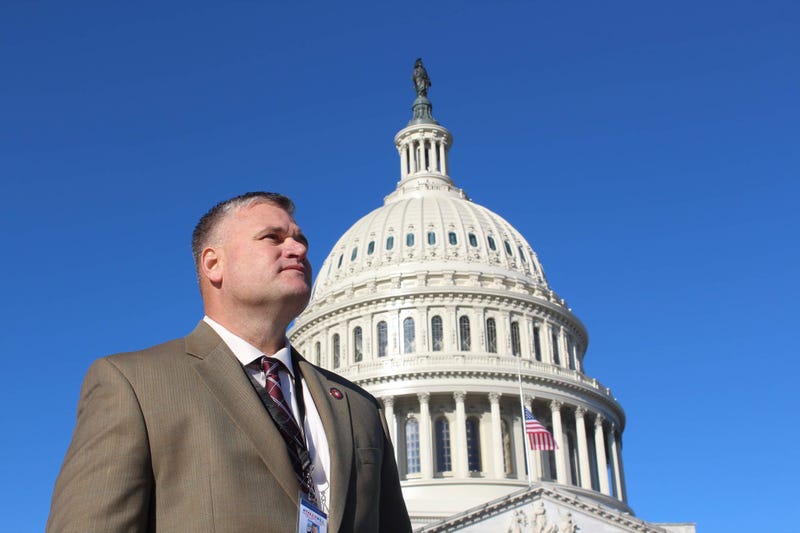 One Marine veteran is working to protect 20 million veterans from the pain he experiences every day.

Brian Tally has been working for years since he was irreparably injured by near-fatal Department of Veterans Affairs medical malpractice to ensure what happened to him does not happen to any other veterans.

Two bills in Congress are named for Tally, and on Thursday, the House Veterans Affairs Committee for the first time brought one of those to a hearing.

"We have come a very long way in our efforts in changing an outdated law that has dishonored veterans and their families for generations," Tally said. "We have fought for two years for a hearing. Our mission has been clear, consistent and positive from the very beginning, and that's protecting all veterans who seek treatment at all VA hospitals and clinics."

The Brian Tally VA Employment Transparency Act would allow any veteran or family member who has filed a claim against VA for damage, injury or death to be entitled to receive, within 30 days, a notice from VA about legal council, the employment status of anyone involved in the claim (including whether they work for VA or are a contractor) and the statute of limitations for the claim.

"Brian has been a tireless advocate for veterans who sought care through VA and were harmed through negligence," Chairman Rep. Mark Takano, D-Calif. said during the hearing, adding that those veterans should have the right to know "who caused the harm and what legal remedies are available so they can be made whole."

"It is unacceptable that any veteran be denied the right to pursue a claim because of a lack of transparency by VA," said Rep. Mike Levin, D-Calif., a sponsor of the bill. "Brian Tally has been a tireless and effective advocate for this cause."

Levin asked VA officials during the Thursday hearing if there are policies in place at VA to communicate about their malpractice claims, including whether the medical professional was a contractor or VA staff before the statute of limitations expires.

Only one VA official present was able to answer the question at the hearing, but she could not be heard because of technical difficulties and was not physically present at the hearing.

"The answer is no and you know that," Levin said, in lieu of an answer. "It appears to be VA's position that it is acceptable for veterans to be denied legal recourse because VA did not provide them the information in a timely manner ... VA is unable to provide an unbiased opinion on what is in the veteran's best interest because it is in direct conflict with what is in the VA's best interest."

VA's written testimony said it would be difficult for the department to keep track of claims and statutes of limitations for those malpractice claims.

"VA, a federal agency with a budget of over $200 billion," Levin said. "What makes you think it's easier for a veteran to keep track of this information, especially without legal counsel?"

VA officials were unable to provide any answers to Levin's questions during the hearing.

Tally woke up one morning in 2016 with debilitating back pain that left him unable to stand or walk. Like many other veterans before him, he headed to the VA -- a decision that changed his life forever.

A doctor Tally said he thought worked directly for VA, but was actually an independent contractor, botched his diagnoses, delaying or denying critical care for months. His family was forced to pay out-of-pocket for private care that eventually prompted a battery of tests and surgeries to discover, and then fight, a bone-eating staph infection that was destroying his spine and threatening his life.

VA officials admitted that Tally received second-rate care at the VA emergency room in Loma Linda, Calif., about 56 miles outside of Los Angeles, according to documents obtained by Connecting Vets.

But a 73-year-old legal loophole allows VA to deflect responsibility for the malpractice, leaving Tally with no legal recourse, no way to seek recompense for losing his family car, his small business and putting him out of work for years.

“We nearly lost everything,” Tally told Connecting Vets while walking steadily from one Congressional office to the next to promote his bills. “My life changed in ways I never imagined or saw coming. I live and feel it every day.”

But Tally has never given up. He knows what happened to him could happen to anyone -- with VA contractors nearly indistinguishable from normal VA employees, working “behind the VA veil,” he says.

“I’ve been called to serve,” the former football and baseball coach said, grimacing slightly in pain but with a ready smile for the next Congressional staffer, Senator or anyone else walking the halls around him in one of his last trips to Washington, D.C. to promote the bills. “Hopefully this shows other people that one person can make a difference. If I can just help one person, it will be worth it.”

The second bill in Congress named for Tally is the Brian Tally VA Medical Care and Liability Improvement Act which would ensure that VA health care contractors are subject to federal tort claims, to improve the accountability of VA physicians.

Other bills discussed by the committee included: