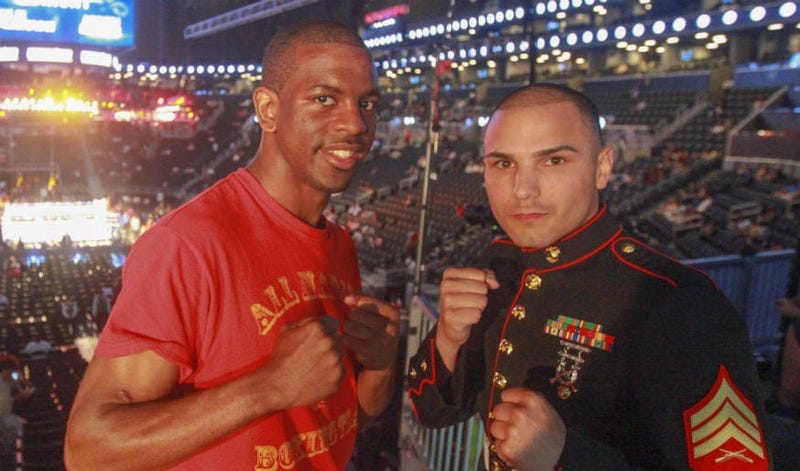 Jamel “Semper Fi” Herring had time to let out just one "Oorah!" during his post-fight interview before the jubilation had to momentarily stop. That's because Herring's friends, family, and several exuberant U.S. Marines who joined the celebration had broken the ring.

In front of a sold-out crowd at the Osceola Heritage Park in Kissimmee, Fla. on May 25, with many active and reserve Marines in attendance, Herring, a former Marine, scored a stunning upset of Japan's Masayuki Ito to become the WBO junior lightweight champion. With the unanimous decision win (118-110, 118-110, and 116-112) he improved to 20-2 in his professional career.

"I always believed I could win a world title," Herring said. "This is a dream come true, and to do this on Memorial Day weekend makes it even sweeter.”

After Herring enlisted in the Marines in October 2003, he served two tours of duty during Operation Iraqi Freedom with his first tour in Fallujah and his second in Al Taqaddum. Herring was stationed in Camp Lejeune and earned the rank of Sergeant during his nine years of service.

Herring, who grew up in the small Long Island town of Coram, NY, was 15 on Sept. 11, 2001. The impact of that event contributed to his decision to serve.

“I had friends who had relatives that were in those buildings, so it impacted me hard,” Herring told TeamUSA.org. “I knew I wanted to do something with my life, so then I decided to join the Marines.”

Days like this is why I say boxing is easier to deal with. Fallujah, Iraq is not a fun area for 19 year old kid. pic.twitter.com/GbRYwRNkpd

During his time in the Corps, Herring trained with the All Marine Corps boxing team, won the Armed Forces tournament in 2011 and earned a spot to compete at the 2012 London Olympics. He became the first active duty U.S. Marine to qualify for the U.S. boxing team since 1992.

A few years ago Herring began having bouts of paranoia and not being able to sleep. When he did sleep he experienced nightmares.

He started drinking heavily and having mood swings. Eventually, his family assisted him in seeking help. "I was actually afraid," Herring told ESPN. "I didn't know how I would be looked at."

Herring was diagnosed with PTSD. There was no overnight cure for him, but months of work with doctors and counselors at the VA. "I'm actually now getting to where I want to be at, where I dreamed," Herring told ESPN before the fight.