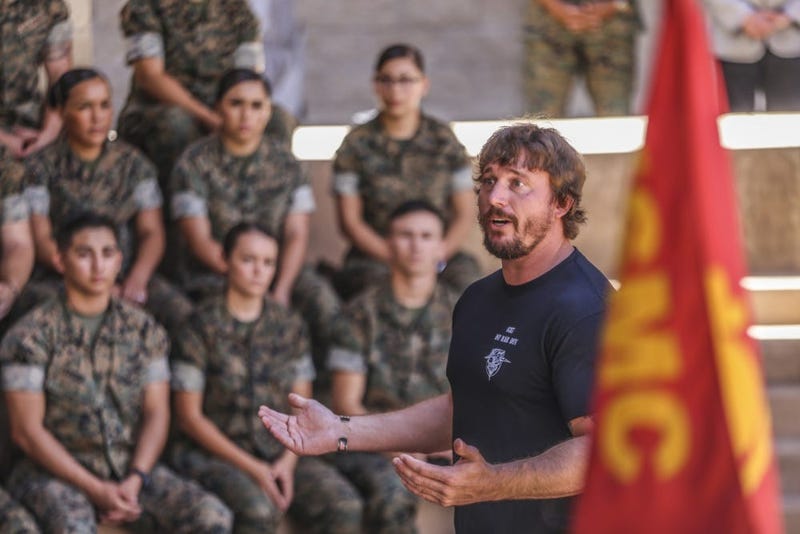 Deploying while in the military and transitioning out of the service have at least one thing in common: work-ups, according to Medal of Honor recipient Dakota Meyer.

“When you get out of the military, all you are doing is a work-up for the longest deployment of your life,” he said at a Heroes Among Us event held at the National Museum of the Marie Corps in Triangle, Virginia, Feb 23.

Meyer, a Marine Corps sniper, was awarded the Medal of Honor for his actions during the Battle of Ganjgal on Sept. 8, 2009, in Kunar Province, Afghanistan.

He left the Marine Corps due to what he called a “bad attitude” in 2010 and found himself struggling to translate the skills he’d learned while in the military into a successful civilian career.

“When I got out, there weren’t too many job opportunities for snipers,” he said.

To be considered for civilian jobs, Meyer found he had to develop a resume as well as learn how to dress for and prepare for interviews - things the military didn't prepare him for.

“When I got out of the Marine Corps, I didn’t have much guidance,” Meyer said.

And that's where a transition work-up can help. Prior to deployment, service members complete work-ups in which they not only physically train, but learn about the region they are going to and what they can expect while there. Meyer said the research and analytical skills used in developing work-ups should be applied when transitioning. Veterans should develop a transition plan in which they outline their goals and develop a resume that highlights the skill set they developed while in the military.

Looking for a way to continue to be of service to his military brothers and sisters as a civilian, Meyer signed on as a brand ambassador for Hiring Our Heroes, a program of the U.S. Chamber of Commerce Foundation established in 2011 that addresses the high rate of underemployment and unemployment among veterans.

“We’ve since transitioned into also properly preparing transitioning service members for the shift from the military to the civilian sector,” said Mona Dexter, director of operations and special events for Hiring our Heroes.

“This is a pipeline that is not afraid to work hard, that is very service oriented, very team-oriented and is about completing the mission,” she said.

At the event, Meyer also spoke candidly about his struggle with PTSD and the large number of people he knows who have committed suicide.

"The biggest thing we do as veterans to each other we feel like (when we struggle with PTSD) it's not normal because we don't talk about it," he said. "You've got to talk about it."