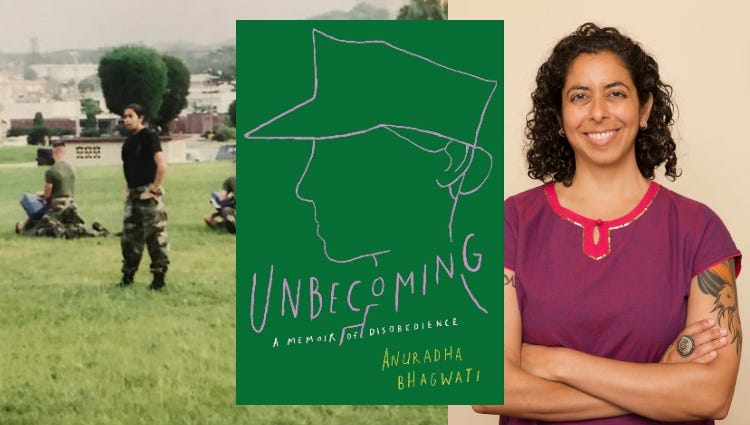 When Anuradha Bhagwati decided to join the Marine Corps, she knew all about the physical demands that would begin at Officer Candidate School and continue during her time in uniform. If you ask, she'll tell you she chose the Marines because they were the most "extreme" branch of the armed forces.

She thought she was ready for the physical and mental challenges of becoming a Marine. She was wrong.

It's an experience she details in her new book "Unbecoming: A Memoir of Disobedience".

"What I wasn't prepared for was the Marine Corps' treatment, or mistreatment, of women," Bhagwati says. "I'd heard rumors but really being in the belly of the beast, it was quite shocking."

RELATED: Male and female Marine platoons train together in boot camp for the first time

Bhagwati, a Yale grad who left the Corps as a Captain in 2004, says she experienced Marines openly talking about women not belonging in the Corps at every command during her career. Perhaps most tellingly, Bhagwati says she had to open an investigation into a lieutenant serving as her company XO.  She says he actively worked to undermine her, while also harrassing other women in their unit. According to her, rape jokes were common and harrassment was typically swept under the rug. The overall environment of the Corps for Bhagwati was a disillusioning and isolating experience.

"I had grown up, basically, supported by family, my friends, my teachers to sort of do what I wanted to do. Y'know there were no limitations on my dreams," Bhagwati says. "In the Marine Corps was the first time I was basically told 'you're a woman and therefore you can not do all of these things. And we expect you to be weak, and we expect you to fail.'"

RELATED: Women vets are leading the charge to gain recognition for their service

Of course Marines are fighters, and Bhagwati is a Marine through and through. She stood up for herself and others while in the Corps, and afterwards when she founded the Service Women's Action Network (SWAN). Her work with SWAN helped shine a light on sexual assault within the military, and was instrumental in repealing the ban on women in combat.

You can hear the full interview with Anuradha Bhagwati below.