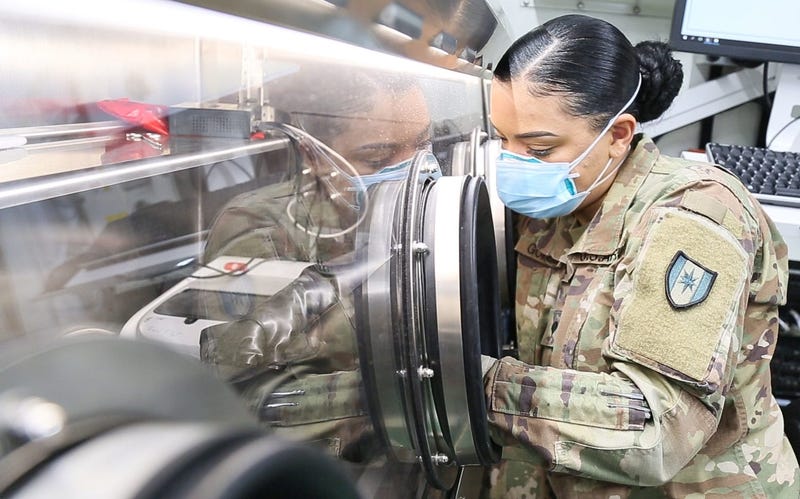 New COVID-19 cases across the Department of Defense increased sharply this week. Meanwhile, the Army is moving forward with a vaccine candidate.

After weeks of consistent decline in new COVID-19 cases, DoD is reporting more than 1,000 new cases for the second week in a row. The majority of these new cases are among the active-duty Army ranks.

While the Army did not respond to Connecting Vets' request for comment regarding how it might be mitigating this spike in cases, the branch did announce this week that it identified a vaccine candidate to move into the next phase of testing.

From more than two dozen prototypes, Walter Reed Army Institute of Research identified a lead vaccine candidate as well as two backup vaccine candidates that will advance to the next stage of research -- human testing.

“USAMRDC is moving at unprecedented speeds in the effort to prevent, detect and treat COVID-19. We are supporting the whole-of-government response with the scientific knowledge and expertise to combat this world-wide challenge,” said Brig. Gen. Michael J. Talley, commanding general of the U.S. Army Futures Command’s Medical Research and Development Command. “With the recent selection of this vaccine candidate, we believe we are one step closer to that goal.”

That human testing still won’t start until later this year, however, again calling to question Secretary of Defense Mark Esper’s belief that DoD will have a vaccine ready for wide distribution before the end of 2020.

Esper announced his 2020 goal during a press briefing at the White House in mid-May -- despite that timeline’s contradiction with the 12 to 18 months, public health officials believe vaccine development could take.

"I think its fair for the secretary to be confident," Pentagon spokesperson Jonathan Hoffman said of Esper’s optimistic timeline. "The secretary is showing optimism and confidence, and I think that's what the American people want to see."

"It's reasonable to expect some form of a vaccine available by the end of the year," Col. Wendy Sammons-Jackson, director of the Military Infectious Disease Research Program at MRDC said at the beginning of June. "As long as we're able to continue to progress, learn, understand and adapt, I think we have all of the resources available and pointed in the same direction that can make [our timeline> possible."

Across the U.S., COVID-19 has now killed more than 116,000 Americans. Public health officials believe a second spike in new cases is coming -- but proper use of personal protective equipment and adherence to social distancing guidance could significantly mitigate the severity of it.