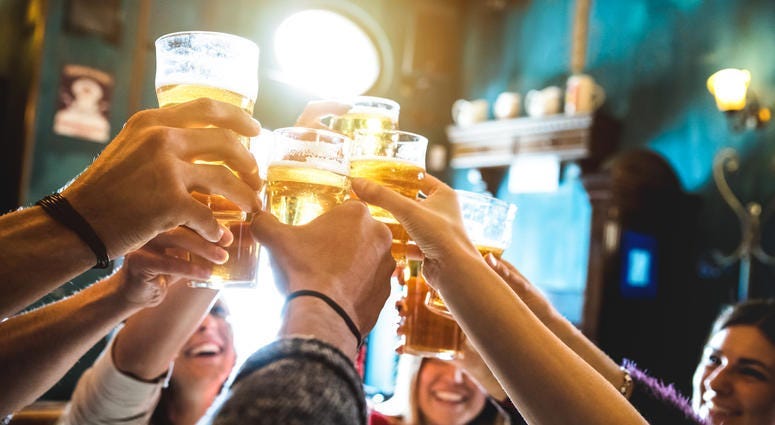 In a survey of nearly 27,000 people, the Centers for Disease Control and Prevention found that the people who responded who said they were members of the Armed Forces consumed more alcohol on average than at least 24 other industries.

But buried in the data is the fact that just 81 of the 27,000 respondents to the survey identified as members of the Armed Forces, or about 0.3 percent of all survey takers – hardly a considerable sample size.

The survey tracked data from 2013 through 2017, and 2017 is the most recently available data. Delphi Health Group broke down the CDC datato show average alcohol consumption by industry.

That breakdown puts the Armed Forces at the top of several categories for alcohol consumption.

The 81 survey takers who said they are members of the Armed Forces consumed alcohol on an average 130 days per year, the CDC data and Delphi Health Group analysis showed – more than any other industry surveyed, based on those 81 people.

Armed Forces was followed by the mining and construction industries.

Of the about 27,000 people who participated in the survey, the 81 in the Armed Forces reported that they drank on average about 2.2 alcohol drinks per sitting, coming in at No. 14 on the list of 25 industries.

Those 41 days put the Armed Forces at No. 1 for binge drinking among the industries surveyed, based on the 81 responses out of nearly 27,000.

While the CDC’s survey produced a small sample size of respondents from the Armed Forces, frequent heavy drinking “occurs among a substantial proportion of U.S. military personnel,” according to the National Institute on Alcohol Abuse and Alcoholism.

A large-scale survey of the military in 2005 found that about 15 to 20 percent of service members from 1980 to 2005 reported that they drank heavily.

“In one population-based study of 88,235 veterans returning from Operation Iraqi Freedom (in 2007) … found that 12 to 15 percent of veterans endorsed problematic alcohol use in the 3 to 6 months following their return from combat. These data suggest that alcohol misuse occurs among a substantial number of veterans who are exposed to combat-related traumatic stress and highlight the importance of understanding the relationships between stressful military experiences (e.g., combat and military sexual trauma) and alcohol misuse,” the NIAAA reported.

If you or someone you know need help with alcohol misuse or other issues, contact Military OneSource 24/7 online and by phone at 800-342-9647.