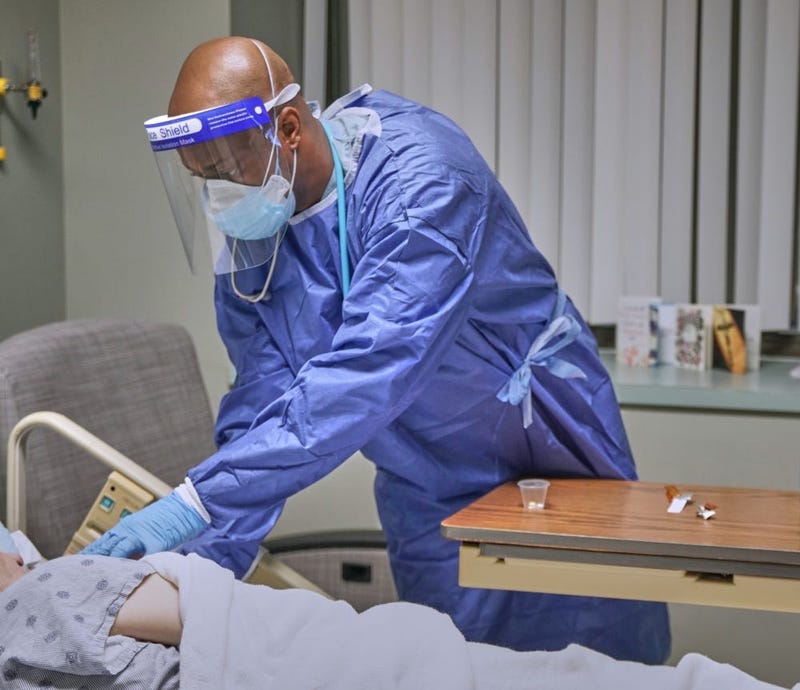 There could be a second spike of the coronavirus, a top defense health official says, and the military health system is preparing to tackle it.

The pandemic also put a pause on the Defense Health Agency's transformation of military health care.

Four years ago, Congress directed DHA to manage all Army, Navy and Air Force healthcare facilities, including 59 hospitals and 360 clinics at military installations across the globe. DHA is taking over those hospitals and standing them up as geographic networks in phases.

The next phase of those plans has been delayed at least 90 days because of the pandemic, DHA Assistant Director Dr. Barclay Butler said.

While the military health system has played a vital role in the federal government response to the pandemic -- including providing millions of supplies, deploying military medical staff and other resources to overwhelmed areas of the country -- Butler said the fight isn't over.

DHA reached into its stores to provide more than 10 million masks, along with other supplies such as ventilators, respirators and medications, and now it's working to replenish those supplies.

"We think there will be a secondary spike that's coming," Butler said of the virus. "We are looking at what is going to happen in cold and flu season, and if COVID will be a confounding factor."

Better testing could help mitigate a secondary spike, he said.

But DHA is confident it will be ready to handle an additional wave of the virus.

"We're absolutely confident," he said of DHA's capabilities and supplies, adding that the agency is encouraged that industrial production of protective equipment and medication is ramping up. "We're more than ready for a second spike. The period we're in right now is the perfect period to look forward."

As for staff who may have fallen ill or been absent to care for ill family, Butler said the military health system has been "able to absorb a reduction in staffing across the board."

"I'm pleased to say across the board we haven't had an impact high enough to have to turn down a COVID patient," he said.

As the nation begins to head back to work in some areas, DHA is preparing for a backlog of patient appointments. During the pandemic, nonemergency appointments were canceled en masse, but now those patients need to be seen, Butler said.

"We talk about a return to a 'steady-state' but that may not be the case," he said. "The baseline may have changed. We want to keep social distancing and precautions to care for patients and staff while beginning to meet that pent-up demand."

The Defense Health Agency was set to continue with what has become the largest overhaul of the military health system in decades, including moving millions of patients to private care providers, closing hospitals and clinics and cutting military medical jobs.

Congress and the president mandated those changes in the 2017 National Defense Authorization Act, which passed in 2016.

But the coronavirus pandemic has thrown a wrench into the plans, causing some delays.

Military families and retirees have told Connecting Vets they worry changes to the military health system. Those plans include limiting access to some military treatment facilities to active-duty troops only, and outsourcing family or retiree care to private providers

Families said they're concerned they could struggle to find adequate care.

Earlier this year, the Pentagon released a report due to Congress that showed it planned to transition dozens of its hospitals and clinics to serve only active-duty service members, booting hundreds of thousands of dependents and former troops to civilian Tricare network doctors instead.

Plans to move patients out of military hospitals are part of a massive restructuring of what was at one time a $50 billion military healthcare system. Those efforts began in 2013, with the goal of improved force readiness, better services and reduced costs by eliminating redundancies.

"In the market, we find that when you standardize care, you always see increased quality and a reduction in cost," Butler said.

Rather than have each military branch run its own hospitals and clinics, now the Defense Health Agency will manage all facilities, running the system using regional markets -- similar to private sector healthcare systems.

On March 25, Defense officials announced a decision to delay the next phase of that process. Five more markets were expected to come under DHA management, but that's been delayed until July at the earliest -- a 90-day pause that could lead to further delays, depending on how the pandemic plays out, Butler said.

The delay affected five markets, Butler said: Tidewater, Va.; San Antonio, Texas; Colorado; Puget Sound, Wash.; and Hawaii. Some of those areas are parts of the country hit hardest by the coronavirus pandemic.

The delay allowed defense medical facilities to focus on "the whole of government response" to the pandemic, including deploying supplies and staff to help overwhelmed hospitals nationwide.

To families' concerns about access to care, Butler said DHA is monitoring each network.

"We're making sure the network around those clinics is robust enough and has enough capacity to take on that extra workload," he said. "We're also letting the Tricare (providers) know the kinds of numbers we expect and giving them time to build the capacity so it's a very seamless transfer. The key for us is to make sure we have continued access to quality care for our beneficiaries."

"We're taking time to give an analysis to make sure that will not hurt or delay the delivery of health care," he said. "A report on that is being worked on now."

Are you a service member or veteran, family member or VA employee affected by the coronavirus? Contact Abbie Bennett: abbie@connectingvets.com or @AbbieRBennett. For secure communications, email abbierbennett@protonmail.com.

MOAA: Pentagon should pause plan to slash thousands of medical staff during coronavirus

Families, retirees could be banned from military pharmacies because of coronavirus