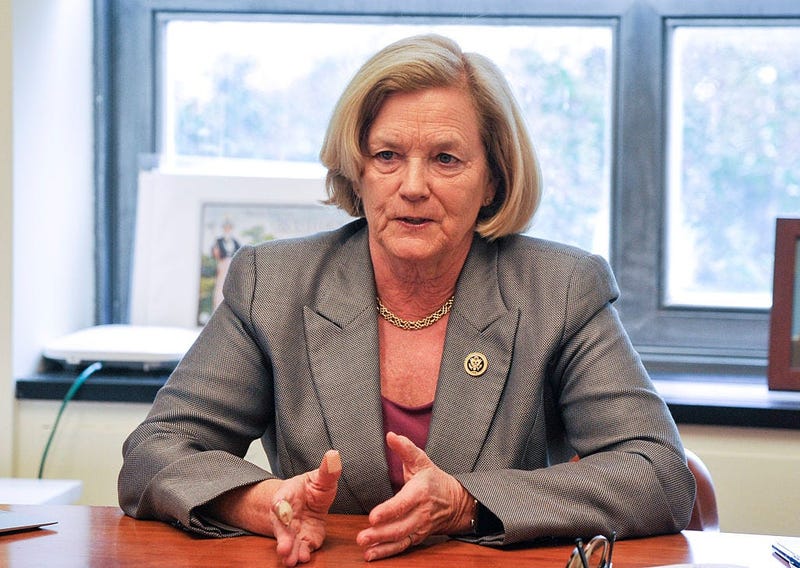 Rep. Anne McLane Kuster says she has a difficult time being alone in her home and sometimes, she wakes up in the night screaming.

“I’ve never told anybody this,” the Democratic congresswoman from New Hampshire said at a House Veterans Affairs Committee hearing Thursday.

Previously, Kuster revealed that she is a sexual assault survivor, and she did not decide to tell her story until four decades later. But because of that, Kuster said she understands why veterans and service members who are survivors of military sexual trauma -- a term that includes harassment, assault and rape, according to the Veterans Administration -- hesitate to come forward with their stories.

“Our understanding of trauma has come so far,” she said. “We now realize how difficult it is for survivors to acknowledge what happened to them and the risks they take in reporting. As a survivor of sexual violence myself, I kept my experience secret for more than 40 years.”

Kuster was speaking in support of a bill introduced by Rep. Chellie Pingree, D-Maine, the Service members and Veterans Empowerment and Support Act. The bill is intended to create an easier path to proving military sexual trauma (MST) so that service members and veterans can become eligible for service-connected disability benefits through the VA.

Pingree and Kuster said it was especially important to make the process easier for veterans to prove their eligibility in the wake of an Office of the Inspector General report that showed half of all veterans whose claims for MST were denied were also processed incorrectly.

“They don’t come forward because they aren’t believed,” Kuster said. “Why would you come forward?”

Over the last three years, VA processed about 12,000 claims for post-traumatic stress disorder related to MST and denied about 5,500 of them, or nearly half.

The incorrectly processed claims included claims where the evidence was sufficient, but staff failed to request a medical exam, there were evidence gathering issues such as staff not requesting veterans’ records and staff made decisions based on “contradictory or otherwise insufficient medical opinions.”

VA leadership at the hearing said they had completed a review of about 92 percent of the denied claims since 2017, nearly 10,000 total, and was continuing to track cases that were incorrectly denied. But OIG leadership said VA had implemented just 2 of the 6 recommendations from its report released in August 2018.

“Those who report months or years after their attack need the same care as those capable of reporting immediately,” Kuster said. “It is not an understatement to say that lives hang in the balance.”

Last year, 7,600 people reported a sexual assault during their military service, according to the Department of Defense, an increase of 12.6 percent over the previous year.

VA leadership said it receives about 18,000 MST-related claims every year and said they opposed the measures in Pingree’s bill that would make it easier for survivors to have claims approved and receive benefits.

The bill would expand the mental health conditions that can qualify a veteran for disability benefits beyond PTSD to conditions such as anxiety or depression.

But VA “strongly opposes” the bill section that would require the VA to accept a mental health professional’s diagnosis and other evidence of mental conditions related to MST as enough proof to approve a disability claim.

Bill advocates said there is a lower standard of proof for combat-related mental conditions that qualify for disability benefits, and VA data shows that MST is more likely to lead to PTSD even than combat experiences.

Because the bill could make it easier for victims to prove their disability claims, VA said it also would expect to spend about $10 billion more over 10 years. But Pingree said she was tired of cost being used as an excuse to potentially deny veterans the benefits they need.

“We should feel a lot of anger and disappointment about not being able to fix this problem,” she said. “Many have waited decades to share their stories and interpret denials as ‘The VA thinks I’m a liar.’

“We can’t let this stand the way it is. Even if it does cost ($10 billion) it’s our obligation to make people whole again and do everything we can.”

If you or someone you know needs help, contact the Veteran Crisis Line 24/7 at 1-800-273-8255 (select option 1 for a VA staff member). Veterans, service members or their families also can text 838255 or go to veteranscrisisline.net.
Follow Abbie Bennett, @AbbieRBennett