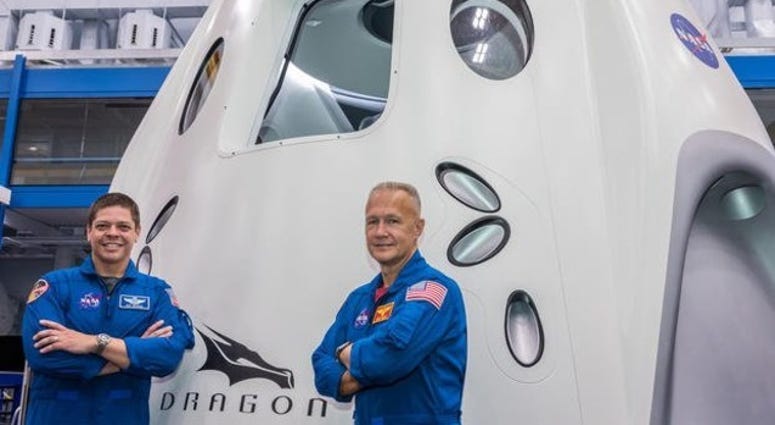 If the weather cooperates, an active-duty Air Force colonel and a retired Marine colonel will be at the controls Wednesday when America launches its first crewed space flight in nine years.

Air Force Col. Bob Behnken, 49, of Creve Coeur, Missouri, and retired Marine Col. Doug Hurley, 53, of Endicott, New York, will be inside the spacecraft, a Falcon 9 rocket and Dragon, as it heads to the International Space Station. The launch is set for 4:33 p.m.  EDT from Kennedy Space Center in Florida.

In a tweet last month that announced the launch, NASA administrator Jim Bridenstine said the space agency  "will once again launch American astronauts on American rockets from American soil.”

Behnken and Hurley are test pilots and veterans of previous space shuttle flights. Behnken was aboard the Endeavour in 2008 and 2010 and has more than 37 hours of spacewalk experience. Hurley was on the Endeavour in 2009. He was also the pilot of the Atlantis during its final mission in July of 2011.

As joint operations commander for the mission, Behnken is responsible for rendezvous, docking and undocking with the space station. Hurley is in charge of launch and landing as  spacecraft commander, according to NASA

The spacecraft is owned by SpaceX, which was founded by Elon Musk.

From the Air Force to NASA, she made sure astronauts were prepared for flightt

Weather forecasters from nearby Patrick Air Force Base have given the launch a 60 percent “go.”

Launch managers will make a final assessment 45 minutes before launch when Behnken and Hurley would normally arm the abort system a few minutes before fueling begins.

If Wednesday’s launch is scrubbed, a second attempt will be made Saturday at 3:21 p.m.

Reach Julia LeDoux at Julia@connectingvets.com.
Want to stay connected to all the stories and resources Connecting Vets has to offer? Click here to sign up for our weekly newsletter.