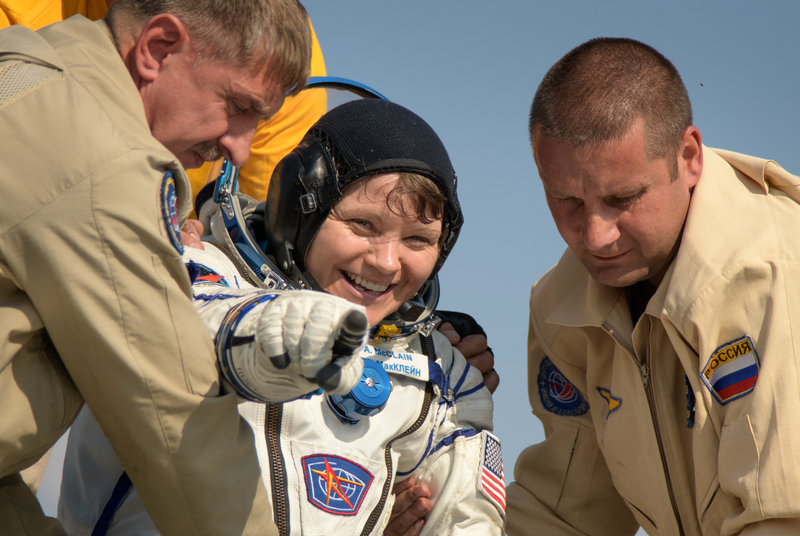 REDSTONE ARSENAL, Alabama – Houston, the Annimal has landed.U.S. Army astronaut Lt. Col. Anne “AstroAnnimal” McClain returned to Earth June 24 after more than six months on the International Space Station. During her first flight into space, she conducted hundreds of experiments and tasks, and performed two spacewalks totaling 13 hours and 8 minutes.“It’s really amazing how the human mind and body can adapt to new environments,” McClain said. “How the once incredible can become so normal. I encourage all humans to do something out of your comfort zone that forces you to adapt. You’ll be pleasantly surprised of your capabilities.”McClain, along with Soyuz MS-11 commander Oleg Kononenko of the Russian space agency Roscosmos and David Saint-Jacques of the Canadian Space Agency launched Dec. 3 as part of Expeditions 58 and 59. Together, they served for 204 days where they orbited the Earth 3,264 times and traveled more than 86,430,000 miles.During her time aboard the ISS, McClain participated in or helped facilitate numerous research investigations and technology demonstrations not possible on Earth. Among these included: on-orbit radiation detection; plant growth in microgravity; human immune-system response and antibody production; protein crystal formations to provide insight into Parkinson’s disease; and many other experiments ranging from physics to biological studies.“Army astronauts have a very proud legacy in the astronaut program.” McClain said. “I can tell you that just like everywhere else in the Army, the biggest attributes that we can bring to the table are leadership and team skills, and those traits that I learned in the Army as both a follower and as a leader working in austere environments with small groups in high gain tasks where lives are at risk, those traits have absolutely transferred over into my time at NASA and I think that is the best thing that we can bring to NASA.”The U.S. Army’s involvement in the nation’s space program dates back to the 1958 launch of Explorer 1, America’s first satellite, and it was a modified U.S. Army rocket that carried the first U.S. astronaut into space in 1961. In total, 18 Army astronauts have been selected by NASA with 16 of those flying into space, including McClain.“(We) proudly watched last night as Army and NASA astronaut Lt. Col. Anne McClain returned to Earth after 204 days aboard the International space Station, continuing the U.S. Army’s 61-year legacy of excellence to the nation’s space program,” said Lt. Gen. James H. Dickinson, commanding general, U.S. Army Space and Missile Defense Command/Army Forces Strategic Command.