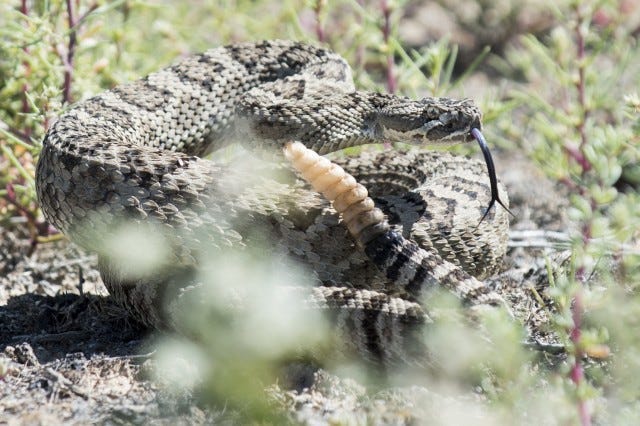 Although snakes did not end up in anyone’s boots as the popular phrase states, they did end up in key leaders’ hands. Idaho National Guard key leaders held rattlesnakes and assisted the Idaho National Guard Environmental Management Office biologists with tagging, studying and measuring rattlesnakes on July 8, at the Morley Nelson Snake River Birds of Prey National Conservation Area, locally known as the NCA.

Snakes have been an ongoing national and local interest with a legacy project directed by the Department of Defense due to a common snake fungal disease that affected preservation and spread in the United States. Biologists here continue to test and study rattlesnakes for the fungal disease.

The Idaho National Guard continues to partner with the Bureau of Land Management and other agencies to protect the NCA’s natural and cultural resources while simultaneously training in what is one of the largest northwest joint combined arms military training sites; the Orchard Combat Training Center.

The current program study, run by Boise State University graduate student, Kristina Parker, is a collaborative partnership between the IDARNG, BSU, U.S. Geological Survey and Northern Nazarene University, funded by the IDARNG. Idaho National Guard biologists have collected data on the environment in the NCA, in accordance with Department of Defense requirements, as part of an ongoing comprehensive study of the land since 1987.

Army captain grinds out reps for kittens and puppies

“Our data shows that the base of this environment, which is the vegetation, has had positive effects over this amount of time,” said Zoe Duran, Idaho National Guard Management Office biologist. “This is because of the resources we are able to put into wildland fire prevention and active restoration of the vegetation.”

The NCA is home to one of largest North American populations of breeding raptors, to include hawks, falcons, eagles and owls.

Idaho National Guard biologists conduct studies to ensure a robust and abundant diet for the birds of prey, like snakes, ground squirrels and lizards, which promotes conservation of the overall wildlife and their habitats within the NCA. The Idaho National Guard ensures the land is well-maintained with healthy vegetation to sustain a balanced ecosystem.

“The military has been known for doing a great job of maintaining their natural resources and conserving the natural landscape of their training areas,” said Kevin Warner, the Idaho National Guard’s Environmental Management Office natural resource specialist.

The NCA is a unique place in Idaho that can sustain the natural birds of prey and other wildlife, while sharing the land with livestock, public land use and military training at the OCTC.

Idaho National Guard key leaders and biologists recorded the health of each of the rattlesnakes they studied and tagged new snakes they found. Fortunately, no one ended up with a snake in his or her boot and the ongoing efforts of good environmental stewardship continued by gaining valuable data from another successful day in the NCA.

Want to stay more connected to all the stories and resources Connecting Vets has to offer? Click here to sign up for our weekly newsletter.