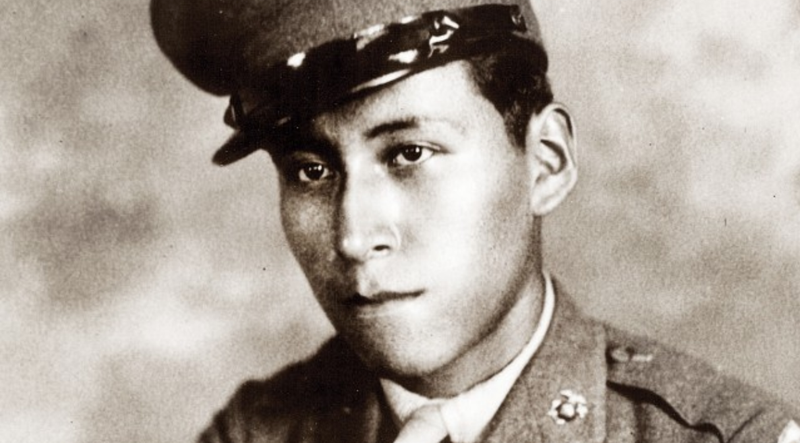 He was an infantryman with Company E, 19th Infantry Regiment, 24th Infantry Division.

The action in which he was killed erupted while his unit was positioned on the ridge of Hill 123 near Chonghyon, North Korea.

Red Cloud was manning a listening post on the point of the ridge, out beyond his company's main positions. He was armed with a Browning Automatic Rifle.

Chinese forces made a coordinated attack on Hill 123 and vicinity. At least part of that attacking force slipped in on Company E's position from the rear and killed many on the spot, some of them in their sleep.

When Red Cloud detected Chinese movements from his position, he gave the alarm -- Company E's first -- and as he did a group of Chinese bolted from the brush and dashed toward him.

He sprang up and poured intense, accurate BAR fire into the onrushing troops.

With "utter fearlessness" he continued firing, according to the citation that accompanied his Medal of Honor.

Struck by enemy rounds, he fell, but, refusing help, got to his feet, wrapped an arm around a small tree, and kept up the point-blank fire before falling for the last time.

Several months later he was awarded a posthumous Medal of Honor for his "dauntless courage and gallant self-sacrifice."

His "heroic act stopped the enemy from overrunning his company's position and gained time for reorganization and evacuation of the wounded," according to the award citation.

Gen. Omar N. Bradley, then-Chairman of the Joint Chiefs of Staff, presented the medal to Red Cloud's mother, Lillian "Nellie" Red Cloud at an April 1951 ceremony at the Pentagon.

A few years after his death, on Armed Forces Day, 1957, the Army commemorated his valor by giving his name to the installation that is now Camp Red Cloud in Uijeongbu, South Korea.

Still other recognition followed over the years.

It has included the naming of veterans' posts and public parks.

Red Cloud was a Native-American of the Ho-Chunk tribe, also known as the Winnebago. He was the descendant of warriors and the grandson of a Ho-Chunk chief.

A few months before America entered World War II, he enlisted in the U.S. Marine Corps.

As a Marine he saw combat on Guadalcanal with the elite 2nd Marine Raider Battalion, also known as Carlson's Raiders.

He fell sick with malaria, refused an offer of a medical discharge, and after long illness and recovery was back to duty in time to serve with the 6th Marine Division in the Battle of Okinawa.

After the war, he was honorably discharged from the Marine Corps with the rank of Sergeant.

But just a few years later, in 1948, he returned to active duty, enlisting in the Army.

Red Cloud has also been commemorated at the 2nd Infantry Division Museum on Camp Red Cloud. Just inside the entrance, visitors encounter a photo of Red Cloud, a copy of his Medal of Honor citation, and a photo of Bradley presenting the medal to Red Cloud's mother, along with a written explanation of the naming of Camp Red Cloud.

He was buried at a United Nations cemetery in Korea.

But in 1955 his body was exhumed, transported to Wisconsin, and interred at the Decorah Cemetery at Winnebago Mission in March of that year.

Were he alive today, Red Cloud would have been 88-years-old.