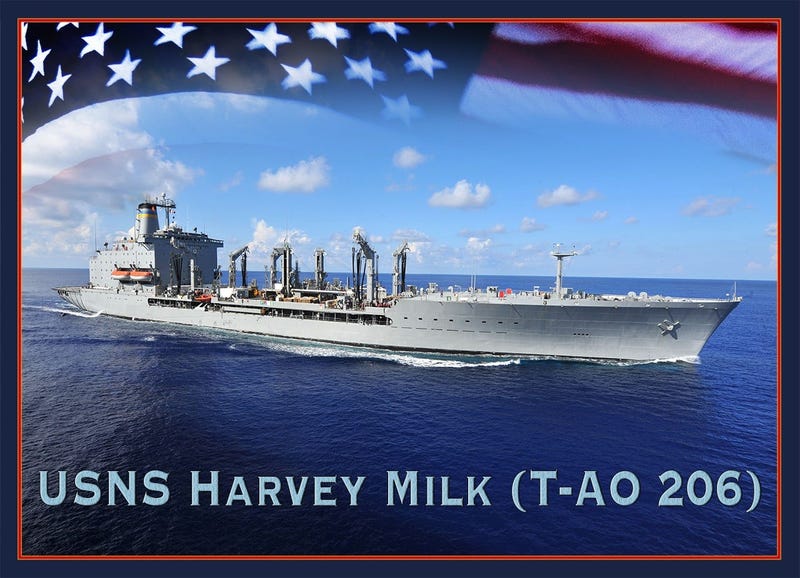 From Secretary of the Navy Public Affairs

Secretary of the Navy (SECNAV) Ray Mabus announced the second ship of the next generation of fleet replenishment oilers (T-AO 206) will be named USNS Harvey Milk after the civil and human rights leader who became one of the first openly gay elected officials in the United States when he won a seat on the San Francisco Board of Supervisors in 1977.The announcement was made at a ship-naming ceremony in San Francisco."The future USNS Harvey Milk will play a vital role in the mission of our Navy and Marine Corps while also forging a new path in fleet replenishment," said Mabus. "Naming this ship after Harvey Milk is a fitting tribute to a man who had been at the forefront of advocating for civil and human rights.Milk graduated from New York State College for Teachers (now State University of New York) in Albany, in 1951 and enlisted in the Navy. He attended Officer Candidate School in Newport, Rhode Island, and subsequently was based in San Diego, where he served as a diving instructor. In 1955, he was discharged with the rank of lieutenant junior grade.After becoming a leading political spokesman for the gay community, he was elected as a San Francisco City-County Supervisor in 1977. His career was cut short when he was assassinated nearly a year after taking office."T-AO 206 will, for decades to come, serve as a visible legacy of Harvey Milk's committed service to his nation, both as a Sailor and as an activist. By adorning one of our ships with his name, his example will live on in the steel of that ship and in all those who will serve aboard her," said Mabus.The future USNS Harvey Milk will be operated by Military Sealift Command and provide underway replenishment of fuel and stores to U.S. Navy ships at sea and jet fuel for aircraft assigned to aircraft carriers. Construction is expected to begin in 2018.