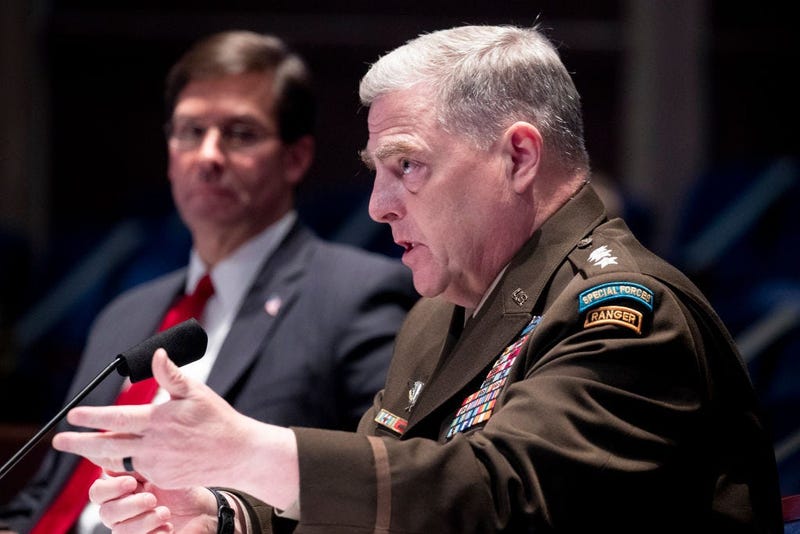 Joint Chiefs Chairman Gen. Mark Milley told Capitol Hill lawmakers Thursday that there "were probably some missed signals" before the alleged murder and mutilation of Army Spc. Vanessa Guillen at the hands of a fellow soldier.

"I suspect, though I don't know, that there were probably some missed signals," Milley said during a House Armed Services Committee hearing Thursday. "And one of the key lessons that we've learned in other situations is that when we do get early warning, to take action, and take action swiftly and appropriately ... My guess is that will probably come out in this case, and that will be one of the things that we need to implement for the future to make sure it doesn't happen again."

Milley did not elaborate on what signals he believed may have been missed in Guillen's case.

"As the father of a daughter, that's just a nightmare," he said. "My heart bleeds for that family, and I can't even begin to imagine what they're going through. But I want them to know we're going to do everything in our power to make sure that doesn't happen again."

Esper said the Army is "on top of" its investigation into Guillen's killing.

Guillen's family said she told them she had been sexually harassed at Fort Hood, but Army officials said previously they had no "credible information" about those allegations after investigating multiple leads.

But Esper on Thursday seemed to be operating under the assumption Guillen was harassed, or even sexually assaulted.

"We’ve got to continue to work at what is believed to be ... the underlying issue, and that was she was sexually harassed, if not assaulted, by the soldier in question," he told lawmakers. "That is something that continues to be a stain on the profession."

Esper said there has been "a lot of progress" made to end sexual harassment and assault in the military over the past 10 years, but admitted there is more work left to do.

"We need to get to zero tolerance of sexual harassment and sexual assault and we need to make sure that everybody in our ranks knows where they can go to for help, where they can find help," he said. "That is my commitment."

"She was afraid to (report it) because the sexual harassment was coming from her superiors, so her concern was the retaliation, being blackballed,” Khawam said. “We believe the person that killed her is that person that sexually harassed her.”

Guillen's family, lawmakers in Congress and women veterans, service members and advocates worldwide are calling for military and Congressional investigations of her case, the Army's SHARP program and Fort Hood leadership, along with proposals to shut down the base and the resignation of Guillen's chain of command.

Women veterans, service women and advocates around the world began a grassroots campaign after news of Guillen's death emerged, calling for justice for their sister in arms and accountability from military and national leaders. The effort demands a Congressional investigation into her disappearance, the resignation of each member of her chain of command at Fort Hood, including the commanding general, the "shutting down of Fort Hood" and a "halt to all enlistment in the military until justice is served."

Now, a group of women veterans is also calling for "no justice, no enlistment," a boycott on military enlistment.

She was last seen on April 22 in the parking lot of her Regimental Engineer Squadron Headquarters, 3rd Cavalry Regiment. Her car keys, barracks' room key, ID and wallet were all found in the armory.

The last person to see Guillen alive, according to a criminal complaint filed in Texas District Court, told investigators she left the armory where she worked to go to one controlled by another soldier, Spc. Aaron Robinson "to confirm serial numbers of weapons and equipment," leaving behind her belongings.

A search of her phone records showed her last outgoing text message was to Robinson, the complaint said. When interviewed by investigators, Robinson said Guillen left his armory to take paperwork to the motorpool. But she never arrived.

Khawam said she was told Robinson and Guillen argued in the armory where both worked after Guillen discovered he was allegedly having an affair with the estranged wife of a former soldier, Cecily Aguilar.

During the argument, Robinson allegedly bludgeoned Guillen to death with a hammer.

"This heinous act caused blood to be splashed all over the room," Khawam said.

Robinson then concealed her body in a container and later disposed of the body near the Leon River with help from Aguilar, his married girlfriend.

Two witnesses told investigators they saw Robinson wheel a tough box out of the armory to his vehicle and drive away on April 22, the complaint said. Witnesses said the wheeled box "appeared very heavy in weight."

Khawam said Robinson picked up Aguilar so she could help him dispose of the body.

The criminal complaint said a search of Aguilar and Robinson's cell phone records, including location data, led them to search the area near the Leon River where Guillen's remains were later found. Scattered remains in a "concrete-like substance" were originally discovered on June 30, the complaint reads.

After finding the remains, investigators again interviewed Aguilar, who told them Robinson hit Guillen with a hammer "multiple times at his arms room, killing her on Fort Hood" and said Guillen "never made it out of (Fort Hood) alive."

She said Robinson took her to the area near the Leon River, opened the tough box and showed her Guillen's body. They then proceeded to dismember Guillen's body together using "a hatchet or ax and a machete-type knife." When they could not burn the body, they placed her remains "in three separate holes" and covered them.

"At first they tried to set her on fire, but she wouldn't burn," Khawam said. "Then they dismembered this beautiful U.S. soldier's body with a machete. She needs to be brought to justice."

Aguilar and Robinson returned to the site on a later day, uncovered Guillen's remains, "continued the process of breaking down the remains," burned them again, "along with their gloves and hairnets" before placing the remains back in the three holes with concrete Aguilar purchased, the complaint reads. Robinson and Aguilar then allegedly burned the clothing they were wearing at their home.

On the night of June 30, Robinson fled his barracks and Fort Hood after the remains were found, the complaint reads. Aguilar helped law enforcement locate Robinson by calling and texting him. The following morning, as law enforcement "attempted to make contact," according to CID, Robinson "brandished a pistol and shot himself in the head," dying by suicide, the complaint and CID reports read.

Robinson, 20, of Calumet City, Ill., was a coworker of Guillen's, Fort Hood and CID officials said. He was not a supervisor in her chain of command. Robinson was a small arms repairer with the Forward Support Troop, Engineer Squadron, 3rd Cavalry Regiment.

Aguilar, 22, was arrested July 1 and charged by civilian authorities on Thursday with one count of conspiracy to tamper with evidence in connection with Guillen's disappearance, according to a Justice Department statement about a criminal complaint.

A hearing is expected early next week. If convicted, Aguilar faces up to 20 years in prison and a maximum $250,000 fine.

"We can't comment on specifics because it is an ongoing investigation," Fort Hood CID Senior Special Agent Damon Phelps said.

Phelps said available video footage had been reviewed, but there was not video "of the incident" and no video in Guillen's unit. They said agencies had spent 10,000 hours investigating and conducted more than 300 interviews so far.

Phelps said two suspects -- Robinson and Aguilar -- have been identified so far, but no others. With Robinson's death, Phelps said "There is one person who will be prosecuted," but did not name Aguilar. They would only describe the relationship between Guillen and Robinson as "coworkers."

“Sooner or later the truth will come out because we are not going to stop,” said Guillen’s older sister, Myra, during. “We have to know everything.”

Forces Command and Fort Hood did not say if the investigation was related to Guillen's disappearance. Her family previously said Guillen did not report her harassment to her unit's SHARP representative.

"They should be ashamed of themselves. Protocol was breached in every manner. We lost one of our own on our own base," Khawam said. "Everything we were given was lies. It was evasive. They were very disingenuous to us. I don't know who's covering up for who but it doesn't matter."

Anyone with information can contact Army CID Special Agents at 254-287-2722 or the Military Police Desk at 254-288-1170. They can also anonymously submit information at www.cid.army.mil/report-a-crime.html. People who want to remain anonymous "will be honored to the degree allowable under the law and the information will be held in the strictest confidence allowable," CID officials said.