When Cpl. Matt Foster returned from Afghanistan, there were some mornings he’d wake up in a panic.

“I’d think ‘Oh crap, I have to go feed my dog’ so I’d get out of bed to do that and then realize he was gone. And then I’d sit down and it was really hard on me. Getting used to him not being there was really hard.”

Marine veteran Foster, of Colorado, was partnered with Mick, a black Labrador Retriever, in 2012 while deployed to Afghanistan as part of  Task Force Gator.

“He’s kind of a weirdo,” Foster said, laughing at his first impression of his new partner, a goofy, gap-toothed, people-pleasing pup who “just wants love.”

“Mick was just a pleaser,” Foster said of his time working with Mick, a bomb detection K9. “He really just wanted to make me happy and do the right thing. He was amazing at finding explosives but he was a little handler dependent. But he ended up growing on us. He really became our mascot because he’s such a cool dude. He just made me laugh all the time.” 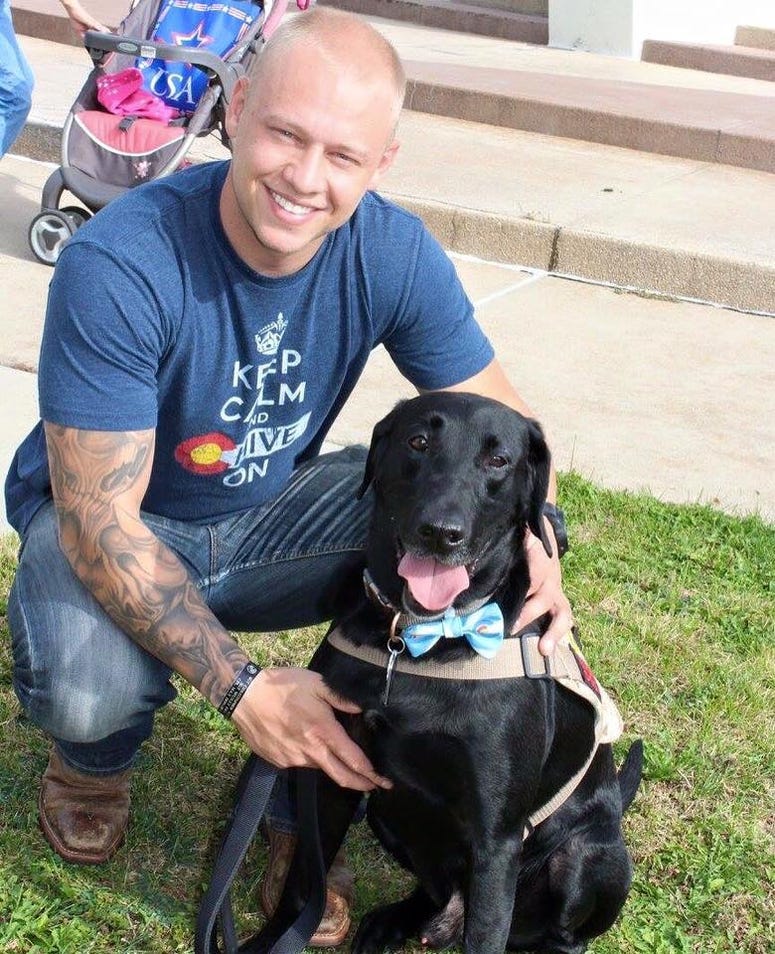 But Foster had to leave Mick behind at the end of his tour to work with another handler. The separation wasn’t easy.

“I was really torn. It sucked,” he said. “You build such a relationship with these animals. They become part of your family. And they’re Marines just like any of us on two legs.”

When Foster came home, he left the service. But he missed Mick. He had already done the paperwork to adopt him if he made it to retirement.

It would be about a year and a half before Foster got the news -- Mick was ready to come home. Foster was first in line to give him a home.

“When I first got that email, I had to pull over because I was beside myself,” he said.

“At the time I had just gotten out and I was trying to find work. I was super broke and they were telling me it was going to cost three grand to get my dog back. I started freaking out. I really wanted him back. I was on a mission to get him back. But I just couldn’t afford $3,000.”

That’s where Mission K9 came in.

“I remember Kris calling me and I told her, this is how much I can afford to try to get him back and I remember she was like, ‘No, you don’t understand. It’s taken care of. We’re paying for it. We’re going to get him back to you.’

“It was probably the best news that I’d ever gotten in my entire life.”

Mission K9 is a nonprofit that reunites working dogs -- including military dogs -- with handlers like Foster or finds them safe, happy retirement homes. They’ve reunited more than 250 dogs and handlers, Maurer said. The Department of Defense determines who gets a retired military working dog, but Mission K9 takes it from there -- a pricey, lengthy process to return dogs from overseas or transport them across the U.S. to their grateful handlers.

“There’s an assumption that these working dogs are automatically being taken care of after they leave service,” Mission K9 president Kristen Maurer said. “But that’s not the case. A lot of them are stuck in kennels — not just in the U.S., but overseas. We really need to get them back. We want to honor these dogs that have given their lives for us. We want to make sure they come back and get the retirement they deserve.” 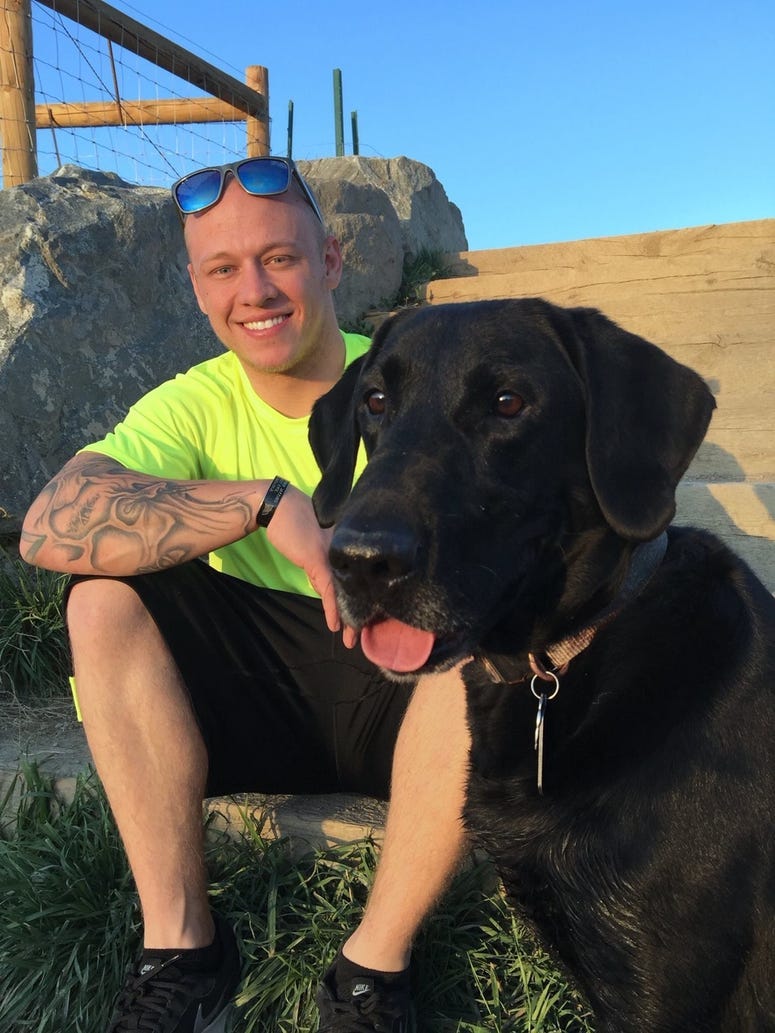 “I don’t say that lightly. I really was struggling when I got back. Trying to find my place and realizing that wasn’t my life anymore. On top of that, still dealing with the emotions of losing my dog,” Foster said. “Losing two of the most important things to me … When I heard I’d get Mick back … It changed my life. It gave me an opportunity to look at something positive for once and put me on a path to where I am now where I’m successful and I have a wife and a home and a career. The push getting Mick back gave me to better myself … That’s why Mission K9 and Kris and those people are family to me. They completed that void in my life for me”

It didn’t stop there, Foster said, laughing. He met his wife because of Mick.

“I thought she was really cute and I sent her a picture of Mick and was like ‘Hey, do you want to go hang out with me and my dog?’ and she said she’d hang out with Mick. I said ‘Good enough for me!’ She couldn’t get rid of me after that.”

For Maurer, it’s stories like Mick and Foster’s that keep her going.

“I can have the dog for three months and the second I hand it over the handler, it’s like ‘OK, thanks for the ride. I’m with my person now. Hey, I remember you.’ They are just so happy to be back with their person. It’s pretty amazing to watch.”

Reuniting with Mick was the first step on a journey to the life he has now, Foster said. And it started the night the lab came home.

“He was laying in bed with me and he just sat there and stared at me for like 45 minutes and I think he understood, he figured out who I was and was like ‘What’s up dude? I remember you,’” he said. “That moment when both of us kind of figured out he was home and we were finally complete now. We could finally relax because we had each other again.”

For more information on Mission K9 or to donate, click or tap here. 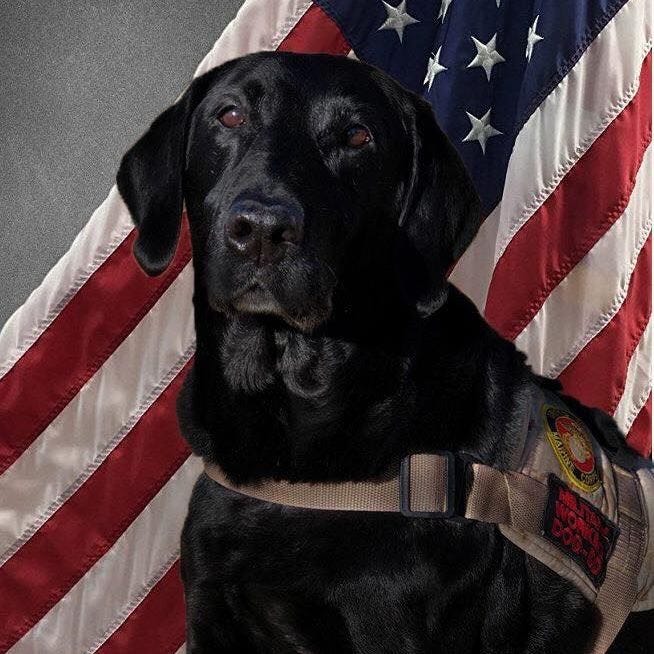 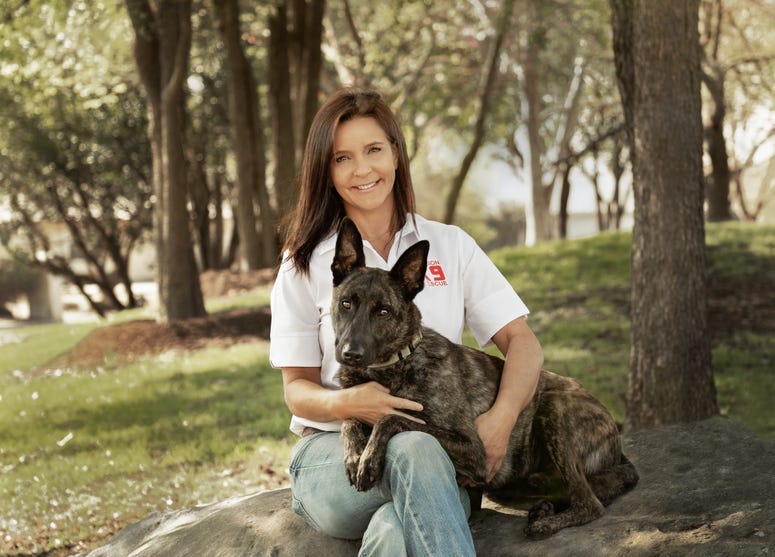