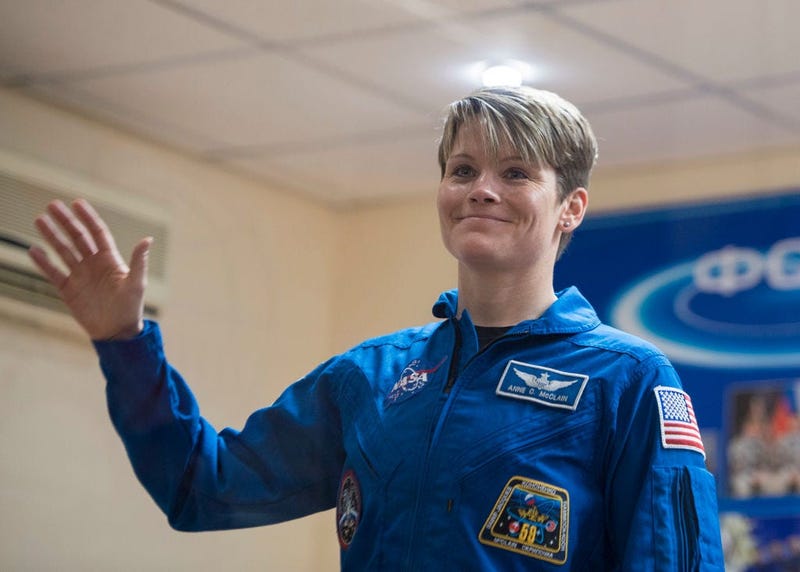 A NASA astronaut is accused of what may be the first crime committed in space.

Army Lt. Col. Anne McClain, a decorated astronaut and engineer, is accused of improperly accessing her estranged wife's bank account from the International Space Station earlier this year, as first reported by The New York Times.

Summer Worden is a former Air Force intelligence officer. She noticed that McClain had information about her spending and used her intelligence background to check the security of her account. Her bank showed a NASA computer had accessed it.

So Worden made a complaint against McClain with the Federal Trade Commission of identity theft, CNN reported. Her parents made a second complaint to NASA.

McClain's lawyer told The Times "she strenuously denies that she did anything improper" and she is "totally cooperating."

Her lawyer said McClain was monitoring Worden's bank account to ensure the wellbeing of Worden's son, who they had been raising together.

NASA is investigating the complaints, according to multiple reports.

"There’s unequivocally no truth to these claims. We’ve been going through a painful, personal separation that’s now unfortunately in the media," McClain tweeted Aug. 24. "I appreciate the outpouring of support and will reserve comment until after the investigation. I have total confidence in the IG process."

The couple has been separating and in the midst of a custody dispute over Worden's son for the past year, the Times reported.

“I was pretty appalled that she would go that far. I knew it was not OK,” Worden told the Times.

McClain, since returned to Earth, is a West Point graduate and one of 12 women astronauts who could be the first woman to walk on the moon by 2024, CBS News reported. She clocked more than 800 flight hours in combat during Operation Iraqi Freedom before she joined NASA in 2013, the Times reported.

In a statement provided to multiple news organizations, NASA declined to comment on personnel matters.

"Lt Col. Anne McClain has an accomplished military career, flew combat missions in Iraq and is one of NASA's top astronauts," NASA said in a statement. "She did a great job on her most recent NASA mission aboard the International Space Station."

The International Space Station, a partnership between the U.S., Canada, Russia, Japan and multiple European countries, dictates that people and possessions in space are subject to the jurisdiction of their country of origin, BBC reported.

McClain was previously in the news for her inclusion in the planned all-women spacewalk, which was canceled when NASA said there weren't enough space suits available for both women. McClain was replaced by a male astronaut.