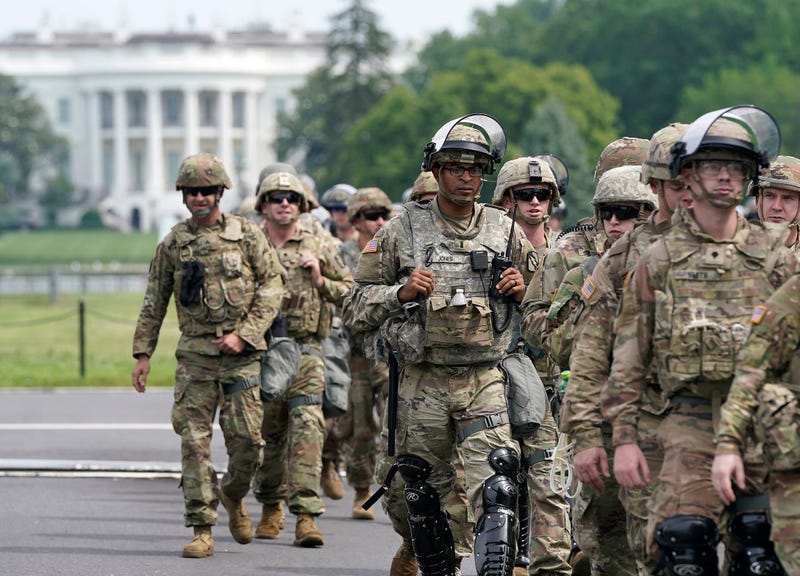 As the nation approaches Election Day after months of unrest across the country many have speculated, wondered and worried -- what role will the military play at the polls?

In short uniformed, armed soldiers will not stand between voters and the ballot box. It may actually be a crime to do so -- on top of risk of voter intimidation. Federal law dictates that it is a crime for a federal official to deploy forces or armed men to a place where an election is being held unless “necessary to repel armed enemies of the United States.”

However, federal forces can be activated if there is a prospect for violence or civil unrest during or after an election. A study released last week identified five states at high-risk of experiencing election-related armed violence from militia groups: Pennsylvania, Georgia, Michigan, Wisconsin and Oregon. And President Donald Trump has indicated his "strong desire" to have forces at polling places to monitor the election and guard against fraud.

So what role is the military really playing at the polls this year.

This, of course, is entirely different from uniformed, armed military troops sent by the president into states without the consent or cooperation of state governors such as what occurred earlier this year in Oregon. But Guard members in civilian clothes activated by their own governors is nothing new or drastic and has been ongoing for years.

Other states are preemptively activating their National Guard troops for what is being referred to as "post-election support." Officials with the Texas National Guard say they have been ordered to send up to 1,000 troops to several Texas cities including Dallas, Fort Worth, Houston, Austin and San Antonio.

Again, these troops are not patrolling polling locations, nor are they likely to. During a press briefing Wednesday, National Guard leadership from several states all concurred -- federal activation of the National Guard is not necessary or expected.

The National Guard has been far more visible in 2020 than in recent years past. Close to 19,000 Guard troops are currently activated in the fight against COVID-19. Another 900 are still serving in civil unrest capacities in several states. Even more troops are fighting wildfires in the western part of the country and hurricanes in the southeastern.

This, Nathaniel Persily from Standford Law School said, is why the National Guard and the military, in general, must be used very, very carefully.

“Since the protests and since the rolling out of troops in cities across the United States, we have to be particularly careful now about deploying the National Guard in any place where voting is happening, just because of the symbolism of it all,”  Nathaniel Persily, a professor at Stanford Law School told The War Horse.

"It's allowed us to have more of a calming effect," said Army Maj. Gen. Jeff Holmes, adjutant general of the Tennessee National Guard. "We've been able to reach a good balance in protecting all citizens while allowing peaceful protests."

Reach @ECBHowe on Twitter.
Sign up for the Connecting Vets newsletter to get more of the stories and resources we have to offer.