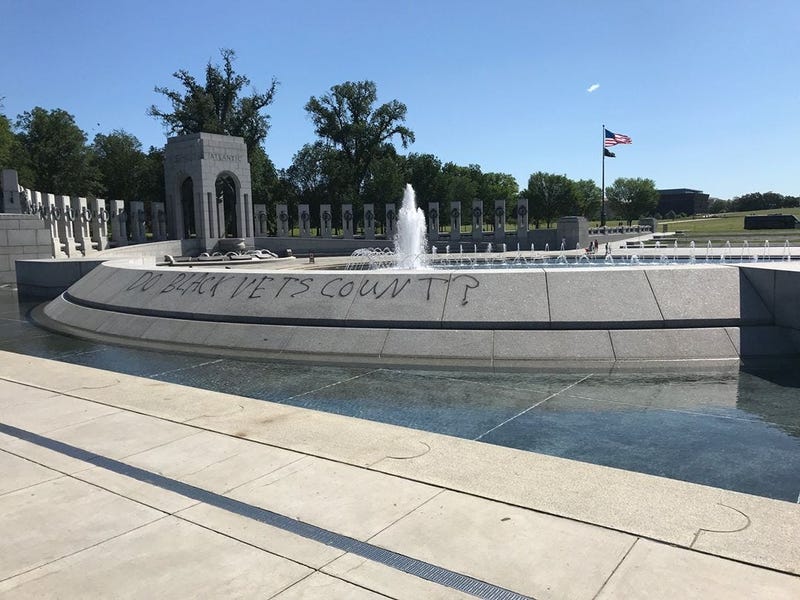 The National Park Service has removed the graffiti spray-painted on the National World War II Memorial by protesters over the weekend.

Holly Rotondi, executive director of the Friends of the National World War II Memorial, on Monday thanked the NPS for swiftly removing the vandalism, which read "Do black vets count?"

“The World War II Memorial was built to honor the Greatest Generation and all Americans who fought against authoritarianism, fascism and racism,” she said.

The National Park Service tweeted out pictures of the damage that occurred to the World War II Memorial, Lincoln Memorial and several other monuments in Washington, D.C. on Sunday.

In the wake of last night's demonstrations, there are numerous instances of vandalism to sites around the National Mall. For generations the Mall has been our nation’s premier civic gathering space for non-violent demonstrations, and we ask individuals to carry on that tradition. pic.twitter.com/LmIHfW2AHj

Protesters have taken to the streets nationwide to vent their outrage at the death of African American George Floyd at the hands of a white Minneapolis, Minnesota police officer last month.

Protesters also broke several windows and spray-painted curse words along the sides of the Department of Veterans Affairs' main offices, which are located a block away from the White House, Military.com reported.