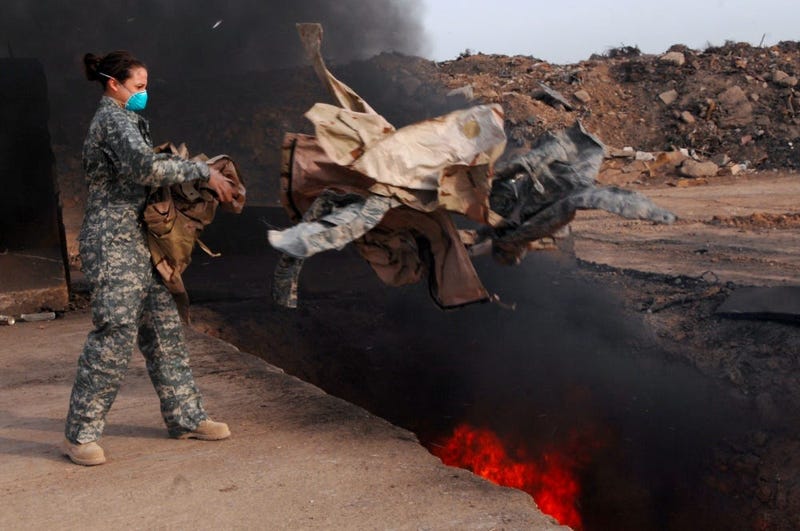 This story originally published Sept. 14, 2020 at 2:14 p.m. EST. It was updated Sept. 15 at 12:22 p.m. to reflect an interview with former VA Secretary Dr. David Shulkin and comments from lawmakers and advocates at a press conference.

Under a newly introduced bill in Congress, veterans ill from toxic exposures could have a new avenue for benefits.

"My husband is dead because America poisoned its soldiers," said Danielle Robinson, wife of Sgt. 1st Class Heath Robinson, who she said died after a long fight with respiratory illnesses they believed were caused by his exposure to burn pits while deployed. "It's a national disgrace that our war heroes need celebrities to speak out on their behalf to get this addressed."

The celebrity in question, Stewart, successfully advocated for a similar measure to provide compensation to 9/11 emergency responders and has now turned his attention to veterans and military toxic exposures.

"The truth is that this is not about science. This is about money," Stewart said. "We always have money for war, but not for the warfighter. We support the troops, but not when the troops need support ... Delaying care and waiting for veterans to die is not a mantle worthy of our country."

Under current policy, veterans who sicken after being exposed to toxic hazards during their service must prove that their illnesses were caused by those exposures unless the Department of Veterans Affairs considers the illness a "presumptive."

But adding illnesses to VA's list of presumptive conditions -- those health concerns VA or lawmakers have decided are "presumed" to be caused by military service -- is difficult, at times complex and often costly, making progress to expand the list arduous. And in Washington, cost has been the death knell for previous legislative efforts.

So far, VA only recognizes temporary health effects related to burn pits, including respiratory, skin, eye and gastrointestinal tract irritation, though it estimates as many as 3.5 million American troops may have been exposed to airborne hazards such as burn pit emissions since 9/11.

The Presumptive Benefits for War Fighters Exposed to Burn Pits and Other Toxins Act introduced this week has an ambitious aim -- cutting through the red tape to switch the burden of proof from the veteran to VA. The legislation would require VA to provide benefits to veterans exposed to hazards during service who have one or more of the dozen of diseases included in the scope of the bill, such as "cancer of any type, chronic bronchitis, emphysema, lymphoma, Granulomatous disease, pulmonary fibrosis, sarcoidosis, asthma diagnosed after service" in the areas covered by the bill and more.

The bill includes coverage for veterans ill after exposures in at least one of 33 countries.

The Department of Defense estimates that at the height of the wars in Iraq and Afghanistan, Americans were responsible for more than 200 burn pits smoldering across both countries. The largest of those was at Balad Air Base in Iraq -- a 10-acre pit of burning trash that continued to spew toxic smoke from at least 2003 to 2009.

But though the Pentagon and VA acknowledge that such exposures can be harmful, there are no presumptive conditions so far to provide benefits for illnesses caused by airborne hazards such as burn pit exposure. So far more than 212,000 veterans and troops have added themselves to VA's Airborne Hazards and Open Burn Pit Registry, but participation is voluntary and advocates say that number far undercounts the number affected.

Most of the veterans who have filed a VA claim for burn pit exposure have so far been denied.

From 2007 to 2018, VA received more than 11,000 claims of illnesses veterans believed were caused by burn pit exposure, and VA denied about 80% of those claims.

The burden of establishing a firm link between toxic exposures and the illnesses they cause has proved heavy over the years, as Pentagon records of exposures are notoriously incomplete or nonexistent -- including the locations of burn pits and other hazards -- leaving veterans waiting as they grow more ill or die,

To be covered by the new bill, veterans must have a campaign medal for a deployment connected to the Global War on Terror, the Gulf War, or have served on active duty on or after Aug. 2, 1990 and "spent a minimum of 15 or more cumulative days" in a long list of countries, most of which are in the Middle East, Southwest Asia or North Africa.

The bill did not include an anticipated cost for covering the list of illnesses and thousands of veterans it would likely extend benefits for, and lawmakers did not include a price tag in their news release about the bill. But based on the number of conditions that could be covered and the number of countries included in the bill, the cost will undoubtedly be high. Cost has been a sticking point in the past for legislation aiming to expand benefits for Vietnam veterans exposed to Agent Orange.

"This is totally within the responsibility and authority of the VA," he said. "The secretary has the authority ... Congress needs to get involved in its oversight role only when the federal agency is not appropriately acting on the authorizations it already has."

And in Shulkin's mind, VA has so far failed those veterans by placing the burden of proof on them, "forcing them to wait."

"The alternative is we let veterans suffer and unfortunately die off without getting the help and services they need," he said. "This is really about the financial cost of this ... My belief is this is not an option. When you commit to send men and women off into conflict, when you make that decision, you are essentially already committing to being responsible for them."

During his time as secretary, Shulkin attempted to add more diseases to VA's list of Agent Orange health concerns that would qualify veterans for benefits, but according to documents obtained by a veteran through the Freedom of Information Act and provided to Connecting Vets, White House officials stood in Shulkin's way expressing concern about the cost of covering additional diseases and requesting more research. Patricia Kime first reported on those documents for Military Times.

Previously, Stewart argued that war profiteers should share the cost of veterans' care, including those exposed to hazards while deployed.

"If we've got the money to go to war, we have to make sure we have the money to take care of people when they come home from war," Stewart said during a June interview. "I would like to see the people who profit off of war have to kick in for the people who suffer from the effects of war. I believe that in the way that oil and gas companies have to kick a 10 percent contingency on spills, I think war profiteers should kick in a 10 percent contingency plan, so that (veterans) don't have to always come, hat in hand, begging for money because their brothers and sisters are still dying from the things that they saw and faced in downrange war zones."

This will be the latest in a series of toxic exposure legislation introduced in Congress over the past two years, including a landmark bill introduced by Sen. Thom Tillis, R-N.C. The Toxic Exposure in the American Military (TEAM) Act aims to allow VA to potentially expand benefits and health care to thousands of veterans by allowing VA to add more presumptive conditions for troops exposed to toxic substances, such as herbicides and burn pits, and provide consultations, testing and treatment, among other major mandates. Toxic exposures have increasingly gained attention as veterans and troops sicken with rare cancers, respiratory and fertility issues, especially those who served in Afghanistan and Iraq.

One of the major hurdles VA leaders cite for covering illnesses veterans insist were caused by their exposures is a lack of concrete scientific evidence. While some data exists linking illnesses to exposures, so far it hasn't been enough to satisfy VA, or key lawmakers who would have the power to establish presumptive conditions.

Just last week, a committee of National Academies of Sciences, Engineering and Medicine researchers released a report reviewing currently available studies and data, coming to the conclusion that while there is "limited or suggestive evidence" to link post-9/11 or Gulf War service to "chronic cough, shortness of breath and wheezing," a new approach is needed to prove other illnesses are caused by airborne hazards experienced during service.

"If people were injured or affected and there's a plausible relationship or explanation for what's going on, the benefit of the doubt needs to go to the veteran," he said. "To simply let people suffer and go without help from their government is not a satisfactory response."

While Gillibrand and Ruiz plan to introduce the new bill soon, there's limited time to see it passed this Congress as the session runs out, an election looms and major legislation is still left unfinished, including finalizing the National Defense Authorization Act and any additional COVID-19 relief efforts. If this or any other bill don't pass by the end of 2020, lawmakers will have to reintroduce them in the next session of Congress and begin the process again.