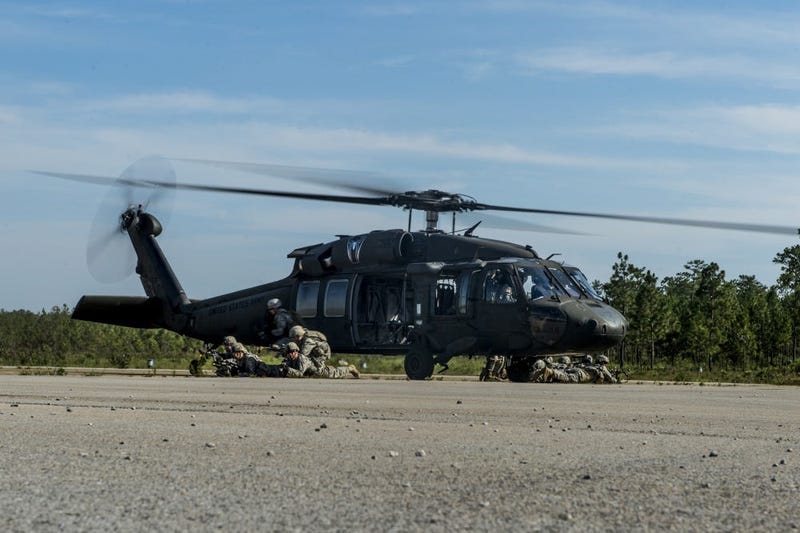 Amid domestic unrest and political turmoil at the highest levels of government, the 82nd Airborne Division's Immediate Response Battalion 1 deployed to the National Capital Region last week and was on standby for riot control duties.

Now, new details have come to light about the 82nd's controversial deployment, one that came close to pitting U.S. Army paratroopers against the American people.

The 82nd Airborne's Immediate Response Force (IRF) includes three battalions, Immediate Response Battalions 1, 2 and 3. They were first warned on Saturday that they might be activated for a domestic deployment. Then, on Monday afternoon while many of them were running routine training at Fort Bragg, they received orders verbally, by text message and by phone calls seemingly all at once. Military police vehicles blocked off street intersections on the base to allow the paratroopers to quickly move back to their battalion areas and begin drawing weapons and equipment, a source familiar with the events of that day told Connecting Vets on the condition of anonymity.

There was confusion at the battalion area as conflicting instructions were issued. Soldiers were initially told they would be departing Fort Bragg in four hours. They left their cold-weather gear behind to make space in their bags for riot gear once it was issued, drew their M249 and M240B machine guns, and packed their protective masks, but left the rest of their MOPP gear behind. Mission Oriented Protective Posture gear includes a full suit and hood that is worn with a gas mask to keep soldiers safe in a nuclear, chemical or biological warfare environment, so it was not needed for this particular mission.

This was a reference to the 1967 Detroit riots in which long-standing racial tensions were ignited by a police raid on an African-American night club. Rioters burned down more than 600 structures in the city and shot at firefighters and police officers alike. With the National Guard struggling to get the city back under control, Gov. George Romney (Mitt Romney's father) asked for federal assistance. A brigade from the 101st and a brigade from the 82nd Airborne Division were flown to Detroit. Their escalation of force was in this order: "unloaded rifles with bayonets fixed and sheathed; unloaded rifles with bare bayonets fixed; CS (riot con­trol gas); and finally loaded rifles with bare bayonets fixed," writes Paul Scheips in The Role of Federal Military Forces in Domestic Disturbances: 1945-1992.

Proving that the past is prologue, the paratroopers deployed to Detroit in 1967 and were ready for, "airmobile operations that could move an infantry company to the scene of a disturbance on short notice," Scheips writes, noting that although about forty Huey helicopters were on standby, they never had to be used.

Now, IRB 1 was spun up and the first elements moved to Pope Army Airfield four hours after being alerted. Cell phones were collected and locked up at Fort Bragg per the unit's policy on Immediate Response Force deployments. Several platoons from Alpha Company, 2-504 boarded 20 UH-60 Black Hawk helicopters with weapons and rucksacks. The aircraft came from the 82nd's Combat Aviation Brigade. They lifted off and flew to the civil aviation side of the airport at Richmond, Virginia to refuel before taking off again. The Black Hawks paralleled I-95 until they reached the beltway, crossed to Potomac, and finally cut east and landed next to the Air Force One hangar at Joint Base Andrews. The first wave of paratroopers liaisoned with the 3rd Infantry Regiment (Old Guard) as logistics were sorted out while C-17 transport aircraft flew in the rest of IRB-1.

With the rest of the IRB flying into Andrews in the early morning hours on Tuesday, busses arrived and transported the soldiers to nearby Fort Belvoir. The 82nd soldiers were put up in a gymnasium on a more isolated part of the base, and this is where they were issued ammunition, sources said. Each soldier was issued ten live 5.56 rounds for their M4 rifles. Additionally, they received non-lethal beanbag rounds for their shotguns and six rounds for their grenade launchers that contained riot control gas. The 3rd Infantry officers who were providing command and control guidance to the IRB were shocked that the paratroopers had brought their bayonets, and told them to pack them away at the bottom of their rucksacks as they would not be needed or used on this deployment, sources said. They were not issued ammunition for their machine guns.

The IRB's task force name also changed at this time from TF White Devil to TF 2-504, possibly to avoid negative optics considering the nature of the deployment, sources said.

Next, the soldiers were brought into a brief which they received from a major and a colonel, both JAG officers. The briefing went on for three hours and went in-depth on the IRB's role under Title 10 of the U.S. code which governs how the military can be deployed. A distinction was made between the active-duty 82nd Airborne soldiers and the National Guardsmen already on the streets, deployed under Title 32. The soldiers were also briefed on the Standing Rules for the Use of Force (SRUF) during domestic disturbances, informing them that they were forbidden from using lethal force, even in self-defense. The Insurrection Act of 1807 was also covered, which provides exceptions to Posse Comitatus, including that the president can deploy federal troops domestically in times of rebellion or insurrection.

In 1967, Romney did not want to use the term insurrection in his request for active duty 82nd and 101st soldiers because it would cancel the insurance policies for those who had lost their homes and businesses in the Detroit riots, as there is no such thing as insurrection insurance. In 2020, President Donald Trump considered invoking the Insurrection Act to get rioting and looting under control.

After the legal briefing, the IRB's leadership element met and discussed what was happening in an informal setting. "There was some very deep philosophical discussions about the Constitution, their role in defending critical infrastructure, facing off against U.S. citizens versus whether protesting or rioting and looting," a source familiar with the event told Connecting Vets. A decision was made that each paratrooper would put their M4 magazine with ten live rounds in it in one of their back pockets on their multi-cam fatigue pants if they were called to action.

At least some of the paratroopers believed that the mission was inappropriate for combat troops like them, trained and equipped for outright war. Some felt as if each of them were being asked to individually decide where they stood on constitutional issues and whether or not what they were being asked to do was right or wrong. Paratroopers are trained to parachute behind enemy lines, maneuver on enemy forces and kill them on the battlefield. Now they were being called up for riot-control duties within their own country.

On Wednesday, the troops received several high ranking visitors. The first was Sergeant Major of the Army Michael Grinston who quickly fixed several problems that the IRB was having. The manager of the gymnasium had locked the office door so they could not control the lights or air conditioning. The soldiers were also eating MREs (military rations) up until that point. Grinston made sure they got hot chow for breakfast and dinner and that a local Subway shop provided sandwiches for lunch. Later that evening, Chief of Staff of the Army Gen. James McConville visited and tried to keep the soldiers' spirits high, telling them that the Immediate Response Force was proven effective by their rapid deployment to Iraq on New Year's Eve and now their second live run in the National Capital Region.

By Thursday, Secretary of Defense Mark Esper had ordered the 82nd Airborne back to Fort Bragg. During a press conference, he made it clear that he did not feel that invoking the Insurrection Act was appropriate in this instance and that the deployment of federal troops was not needed. Many of the troops breathed a sigh of relief, sources said. They were going home. Secretary of the Army, Ryan McCarthy came to visit as the troops were sweeping up the gymnasium and packing their bags. Some of the soldiers were a bit bemused by how young the secretary appeared, but he departed on good terms and everyone went about their business, sources said.

Meanwhile, Esper's press conference had not gone over well with the president. The Secretary of Defense was called in for a meeting at the White House, after which he rescinded his order for the 82nd to return to Fort Bragg. At least for another 24 hours, the paratroopers were stuck at Fort Belvoir. The press conference itself was at least in part a response to criticism Esper received when an audio recording of a phone call he had with state governors leaked in which he said, "I think the sooner that you mass and dominate the battlespace, the quicker this dissipates and we can get back to the right normal."

Those comments were quickly denounced by many former military leaders including former Secretary of Defense Gen. James Mattis.

Esper's comments may have been an attempt to convince state governors to call up national guardsmen to deal with rioting. Trump was reportedly pushing Esper to deploy 10,000 federal troops in the streets of American cities and Esper may have been trying to prevent this by asking for more National Guard activations.

A day later, the Immediate Response Battalion finally re-deployed back to Fort Bragg. However, social distancing was virtually impossible during the deployment. Once returned back to Bragg, enough soldiers tested positive for COVID-19, showed symptoms consistent with the virus, or were exposed to those who did have the virus, that two companies of IRB 1 had to be quarantined, according to the source Connecting Vets spoke with. Connecting Vets reached out to Fort Bragg's public affairs office, who directed us to the 82nd Airborne's public affairs officer, who directed us to the brigade public affairs officer, who did not reply to phone calls or voice messages. Connecting Vets also reached out directly to the Pentagon. A spokesperson declined to comment citing operational security concerns.

Officially, active-duty soldiers were only deployed to the National Capital Region, although they were just a short helicopter ride away from Washington D.C. and could have been ordered into the city in minutes.