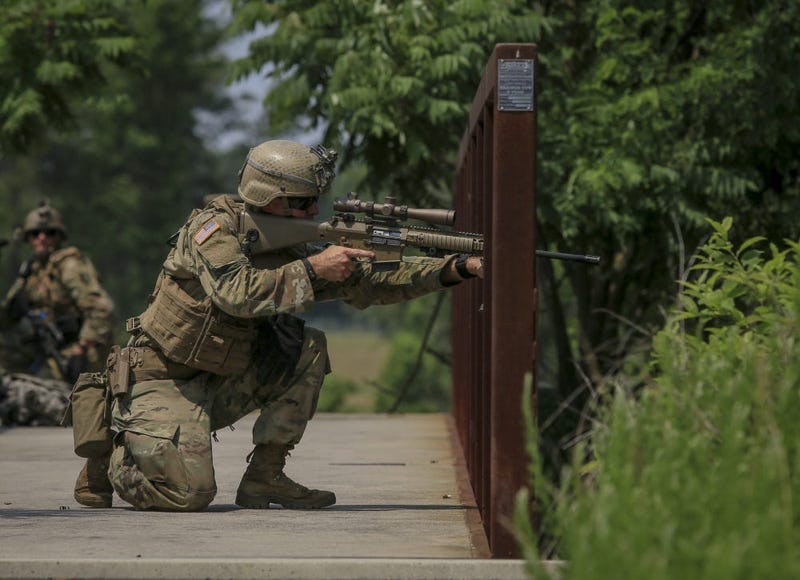 In September of 2019, members of the New Jersey National Guard engaged in a fierce firefight with al Shabab militants at Baledogle Airfield, in southern Somalia when they were hit with a succession of car bombs followed up by a ground assault.

The attack, which resulted in some twenty dead enemy combatants, received scant media coverage and a brief press release from AFRICOM at the time. The 150 soldiers on the ground that day were quietly awarded Combat Infantry Badges (CIB) and Combat Action Badges (CAB) for what may be the largest firefight between Somalian militants and American soldiers since Operation Gothic Serpent in 1993.

C Troop, 1st Squadron of the 102nd Cavalry Regiment, based out of Hackettstown, New Jersey, has a fairly unique mission among National Guard units, specializing as dismounted reconnaissance troops.  At the time of the attack, the unit was on a 9-month deployment to southern Somalia, stationed at Baledogle military airfield (known as BMA).  Also at the base were members of a Special Operations Task Force that worked with Danab, their host nation commando force. Another element co-located at BMA was private security contractors from Bancroft, who are reputed to coordinate with drone pilots on the base, recruit Somalian commandos, and provide logistical support to the U.S. military forces stationed there.

The New Jersey National Guard soldiers said they felt there was always an imminent threat due to the base being so isolated and constant enemy activity. The soldiers worked long days, rotating from security details guarding the base's perimeter and going out on defensive reconnaissance patrols nearby. While the Special Operations soldiers were more or less confined to the base, the National Guard troops would conduct key leader engagements in the surrounding areas, help the locals with civil projects in conjunction with a NGO called Spirit of America, and patrol around BMA in order to familiarize themselves with the terrain, one New Jersey National Guard soldier described.  While the Special Operations soldiers and Bancroft contractors had their mission, the conventional force was primarily there for security and enabling the Somalian federal government to assert themselves in more meaningful ways with the local populace.

A clan-based society, Somalia has long resisted any form of central government and has churned through various attempts to create transitional governments for several decades.

Several of the soldiers deployed to BMA told Connecting Vets there is a general unwillingness to conduct missions since four American soldiers were killed in a disastrous mission gone wrong in Niger in 2017, but due to the constant security threats to the base, they felt the need to be proactive. Knowing that it was a question of when rather than if, the National Guard soldiers carefully planned their defensive positions and security posture around BMA.

Two soldiers present for the attack detailed how it unfolded. An al Shabab militant charged the back end of the base driving a truck filled with explosives. As he drove towards the back gate, his vehicle fell into a tank trap pit that had been dug as a defensive measure. Snipers and machine gunners opened fire on the vehicle. It is unknown if their shots detonated the explosives in the back, if the driver detonated it with a kill switch, or if another militant did with a remote detonator but the resulting explosion was massive. It left a huge crater in the ground, sending dust and debris into the air. Miraculously, none of the American soldiers were injured but this was just the first wave.

A second suicide vehicular-borne improvised explosive device (SVBIED) came screaming towards the gate and detonated. A third came close behind but failed to explode. After three waves of car bombs, a truck dropped off over a dozen more militants to initiate the ground assault. Machine gunners in the towers laid down a base of fire while snipers also engaged the enemy. The National Guard soldiers say they had a laugh as they received Twitter alerts on their phones in the middle of the firefight from al Shabab accounts, informing them they were under attack. Al Shabab also had a press release prepared and sent it out as soon as the attack got underway, two National Guard troops told Connecting Vets.

Part of the unit's defense planning included logging target reference points or TRPs for mortar systems to quickly vector in on during combat. The unit's 60mm, 81mm, and 120mm all fired on the perimeter, killing any al Shabab militants still alive. A picture of the aftermath shown to Connecting Vets depicted multiple PKM machine guns and RPG-7 rocket launchers that the enemy had brought to the fight along with the bodies of dead al Shabab militants.

A drone strike took out the SVBIED that failed to detonate.

In a statement to Connecting Vets AFRICOM confirmed, the attack was, "initiated by three (3) Vehicle-Borne Improvised Explosive Devices and enemy small arms and RPG fire by a group of violent extremist fighters." However, AFRICOMs assessment was that there were ten enemy killed in action, whereas soldiers who were present for the firefight stated it was at least double that. Some of the sources Connecting Vets spoke to believed that al Shabab was specifically targeting the drones on their base, inferring that the first SVBIED was intended to breach the back gate which was directly adjacent to the airfield. Had that been accomplished the National Guard soldiers explained, the proceeding two SVBIEDs would have been able to drive onto the airfield and right into the hangars where the drones would have been parked.

After the attack, AFRICOM released a brief statement to counter the al Shabab propaganda claiming to have killed American soldiers while the attack was still ongoing.  In reality, not a single American was hurt during the attack aside from one troop who had a concussion. This was largely due to the unit's careful defensive planning in the run-up to the attack. Several media outlets published short blurbs mentioning the attack, but it quickly faded from public view. Some of the soldiers on the ground felt the US ambassador to Somalia wanted to downplay the event. The troops at BMA were quietly awarded badges for having been engaged in combat, receiving the Combat Infantry Badge or Combat Action Badge depending on their military occupational specialty.

It was a staggering defeat for al Shabab.  Based on their knowledge of how the attack unfolded, several soldiers involved strongly believe that al Shabab next went looking for softer targets, finding one in Kenya.

At Manda Bay, not far from the Somalian border is a Kenyan military base where American soldiers operate. On January 5th, the base was raided by al Shabab. According to a recent New York Times article, the militants fired a RPG at a Beechcraft King Air 350 used for surveillance. The rocket detonated, killing the two pilots, American L3 contractors named Dustin Harrison and Bruce Triplett. The militants then assaulted the base, destroying aircraft and a fuel depot. During the firefight, U.S Army Specialist Henry Mayfield Jr. was killed. His death, and the attack itself, was overshadowed by the standoff between America and Iran triggered by the drone strike that killed Quds Force leader Qassem Soleimani.

In both attacks, aerial assets were directly targeted by al Shabab. The aircraft at Manda Bay and the drones at BMA are strategic assets, not easily replaced.

AFRICOM could not confirm whether the two attacks were linked, a spokesperson stating that "the Jan. 5 al-Shabaab attack on Manda Bay is still under investigation, I am unable to speculate if there is a connection between these two attacks and why that location was targeted."

A spokesperson for the New Jersey National Guard said they could not comment on the incident as their unit was under federal auspices during the attack in Somalia but added, "The deploying New Jersey Army National Guard Soldiers went through extensive training in order to meet their mission. Clearly, they were prepared to be confronted with any conflict and all of our Soldiers returned home from deployment."