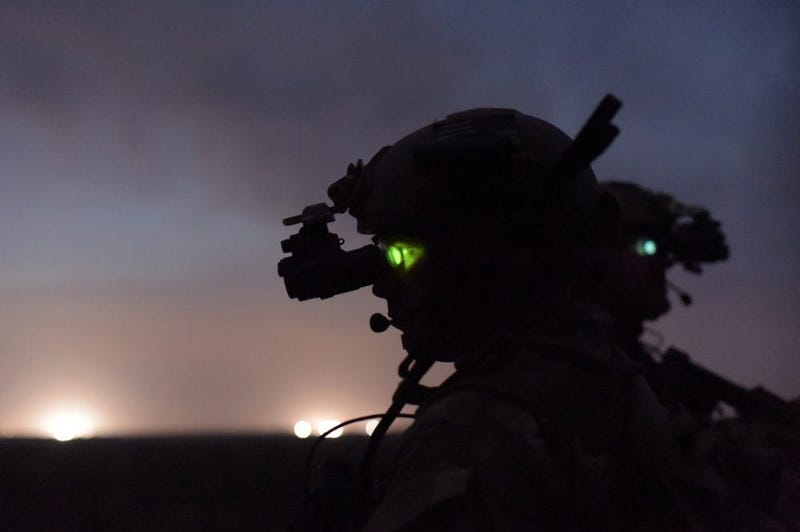 After the 2003 invasion of Iraq, the neighboring countries of Syria and Iran were quite nervous. There was plenty of speculation that the United States may turn their sights on them next and neither relished America building a sphere of influence in their back yard once Saddam Hussein was arrested and subsequently hanged. To this end, both countries waged a form of proxy warfare.

President Assad of Syria opened a corridor through his country for jihadists to freely traverse through and make their way to Iraq where they would fight American soldiers. By 2004 and 2005 it was common for American soldiers to encounter terrorists on the battlefield who had crossed into Iraq from Syria in order to wage jihad.

Quds Force was established during the Iran-Iraq war in the 1980s, a conflict in which Soleimani served. Now he was leading it to wage an unconventional warfare strategy against the United States in Iraq. "Suleimani took command of the Quds Force fifteen years ago, and in that time he has sought to reshape the Middle East in Iran’s favor, working as a power broker and as a military force: assassinating rivals, arming allies, and, for most of a decade, directing a network of militant groups that killed hundreds of Americans in Iraq," wrote Dexter Filkins for The New Yorker in 2013.

However, the real power that Soleimani had was in directing and tapping into what are called bonyads, which are state-run foundations and businesses. Bonyads have been established all over the world, and the IRGC has a hand in nearly all of them.

"They would use these for placement and access of IRGC so they could move money through them, ship goods through them, and Soleimani had the ability to tap into every single one of these around the world," former intelligence advisor Scott Swanson told Connecting Vets.

The Pentagon estimates that Iran is responsible for the deaths of 608 American soldiers in Iraq between 2003 and 2011. Iran accomplished this by using Shia militias in Iraq as proxy forces. At one point it was believed that there were fifty Quds Forces and other Iranian operatives running the campaign inside Iraq. "Iran is believed to have provided training at camps inside its own borders, smuggling huge quantities of small arms, rocket-propelled grenades, mortars, rockets and other munitions," Newsweek reported.

The most dangerous weapon the Iranians introduced into the battlespace was the EFP, or Explosively Formed Penetrator. This was a specialized type of Improvised Explosive Device that utilizes a shaped charge to fire a molten metal slug towards its intended target. EFPs proved especially effective against American armored vehicles in Iraq.

The United States was in a challenging position as the insurgency heated up in Iraq. The military now had to counter a domestic insurgency that was being fueled by adjacent states, Syria and Iran. The response was to escalate the level of violence, and one of the tools used to this end was Joint Special Operations Command (JSOC), the command which presides over America's most elite military units, namely SEAL Team Six and Delta Force. During the war, the 75th Ranger Regiment and the Special Forces Commander's In-extremis Force was placed under the JSOC Task Force in Iraq, which also wielded a robust intelligence capability.

"JSOC began targeting Iranian proxies in Iraq in October 2006," writes journalist Sean Naylor in his book about JSOC titled "Relentless Strike."  The first such operation took place in late December when, "operators descended on Objective Clarke, the Baghdad compound of SCIRI leader Abdul Aziz Hakim. Inside the compound, they found and detained Iranian Brigadier General Mohsen Chirazi, who directed all Quds Force operations in Iraq, and the colonel who served as the Quds Force’s chief of operations." However, the Iraqi and Iranian governments protested the detainment of the Iranian operatives and JSOC was forced to release them just nine days later.

The next operation came in January of 2007 in the Kurdish city of Irbil. "The Delta operators were hoping to snare Mohammed Jafari, the deputy head of Iran’s Security Council who was playing a key role in the Iraq campaign, and General Minjahar Frouzanda, the Revolutionary Guard’s intelligence chief. Neither target was present in the walled compound, however. Instead, the operators detained five lower-ranking Revolutionary Guard personnel who became known as 'the Irbil five,'" Naylor writes.

The Qud's Force counter-attack was swift and deadly. Later that month, eight black SUVs of the type of that US government personnel drove around Iraq in approached a base in Karbala, Iraq. The drivers carried American weapons, wore American uniforms, and spoke English so they were were waved through the gate. The convoy drove straight to the Provisional Joint Coordination Center (PJCC) where the convoy surrounded the building. Iranian backed commandos stormed the building, killing one American soldier and capturing four others. The entire attack lasted 15 minutes, but as the convoy attempted to flee, they were tailed by American attack helicopters. The Iranian militia members executed their four captives, ditched the vehicles, and disappeared. It is believed that the purpose of the terrorist strike was to kidnap American soldiers that Iran could use as leverage to trade for the "Irbil five" captured during the JSOC raid earlier that month.

"While Iraq’s Shi’ite political leadership was only too happy to have McChrystal’s ruthless machine grind away at the Sunni insurgency, there was enormous sensitivity over the targeting of Shi’ite groups, even those who were clearly murdering other Iraqis," Sean Naylor wrote.

A more telling quote comes from an officer that Naylor interviewed. "TF 17 was very political,” said a Ranger officer who served in the unit. “There were a lot of times when we detained a senior-level Quds operative who had a diplomatic passport. We’d get called and Maliki would shut down JSOC for a day, and say ‘Until he’s in my compound, all JSOC operations are closed.’ Not just [TF] 17. All. And so obviously, McChrystal would get pissed and then I would have to drive some dickhead to the Green Zone and he’d get released the next day.”

Over and over again, it appeared that Quds Force operatives were untouchable as they were protected by the Iraqi government. In 2009 America withdrew from Iraq and within a few years, ISIS came about first in Syria and then spreading into Iraq. Quds Force once again swung into action, the appendage of a Shia state battling a Sunni insurgency. Iranian proxy forces helped the Assad regime fight ISIS in Syria and sponsored Shia militias in Iraq to do the same, leading to even greater Iranian influence in the region.

The most recent string of tensions came with the United States pulling out of the Joint Comprehensive Plan of Action (JCPOA) better known as the Iran deal that had been established by the Obama administration.

In June of 2019 the IRGC shot down an American Global Hawk drone. The United States threatened to retaliate against Iran with airstrikes, but President Trump called it off at the last minute saying that killing so many Iranians over an unmanned drone would not have been proportional. The situation continued to escalate over the last few months with America alleging that Iranian sponsored Shia militias were rocketing bases where American troops were present in Iraq. After several troops were injured and a contractor killed, the U.S. military responded with airstrikes in Syria and Iraq directed against the Kataib Hezbollah militia.

Iran then upped the stakes by having proxies in the form of "protestors" occupy and destroy the reception center of the US embassy in Baghdad.

President Trump then authorized the deployment of Marines and the 82nd Airborne Division to Iraq in response and announced it publicly as a signal for Iran to back off. They did, and the protestors left proclaiming that they would pressure the Iraqi government to have all US forces removed from the country. Then, Thursday night a fresh barrage of rocket attacks struck Baghdad International Airport, appearing to deliberately target a joint US-Iraqi counter-terrorism coordination center. Moments later, an American drone launched a missile at a vehicle near the airport, killing Qassem Soleimani and Abu Mahdi al-Muhandis, the deputy commander of Iran-backed militias in Iraq known as the Popular Mobilization Forces. Just after the drone strike, a source speaking to Connecting Vets on the condition of anonymity said that JSOC launched several raids against Iranian backed high-value targets in Baghdad, detaining at least one of them.

That Soleimani was in Baghdad, came as little surprise to experts who have studied his movements and actions over the years.

"He was a lead from the front type of guy. He was highly respected because he was not leading from the rear," Scott Swanson, who has written about his findings on Soleimani in his books "Buried in Black" and "Presence of Evil" under the name J.T. Patten told Connecting Vets. "He was a master strategic thinker. This is the guy that kept doing real unconventional warfare after World War II while we were dreaming about the glory days. He was the guy taking the playbook and actually doing it. As a foe he was quite formidable."

According to Swanson, the Quds Force leader was so iconic in the Iranian military and political circles that they will have to retaliate against the U.S. in order to save face.

"They will reel back and then look to softer targets on a few different fronts," Swanson said. "I don't think you will see them trying to blow up a Marine barracks but I would not want to be traveling in the Middle East right now because I could see them putting a contract out to third party proxies saying it is open season, making us feel that pain so that our public and the world stage might say, did you think about what the second and third-order effects might be before you run a scenario of taking him out?"