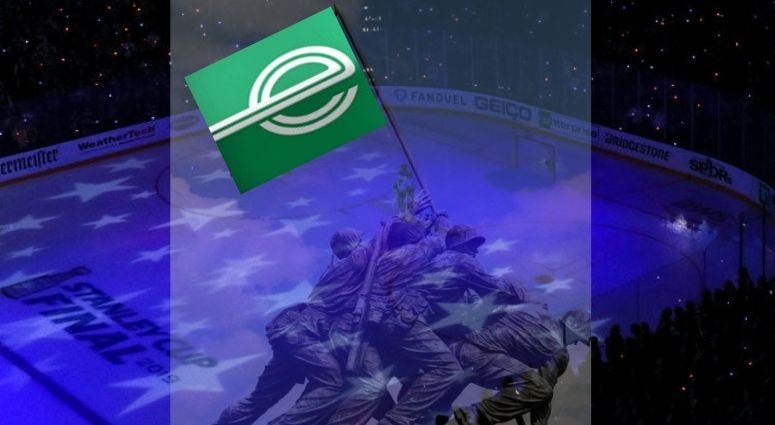 The Stanley Cup finals are heating up between the Boston Bruins and St. Louis Blues.

And while it’s not unusual to find fights on the ice during the game, it appears a fight recently broke out on Twitter over patriotism before the puck even dropped.

Prior to the beat down the Bruins gave the Blues in Game 3 (Boston won 7-2) the audience rose for the singing of the national anthem. As St Louis’ local legend Charles Glenn stood before the crowd and sang an awesome rendition of the national anthem, some people focused less on his singing, and more on something that seemed a little out of place.

Charles Glenn just brought the HOUSE DOWN with this rendition of the National Anthem.

Anyone else get chills when the crowd took over? 🔥 pic.twitter.com/Dj5uk5uhqn

Sure enough, standing opposite Old Glory, was the green and white ensign of Enterprise Rent A Car. And that was enough to set off a fiery debate over everything from feigned patriotism to US Flag Code.

Shame on @StLouisBlues and @enterprise for putting an advertising flag as part of the color guard accompanying the national anthem prior to last night's Stanley Cup game. A nauseating spectacle. We need to push back against this type of ad encroachment. (h/t @DDapsis) pic.twitter.com/lVUnQEJFJj

Scrolling through Twitter there was no shortage of opinions.

Technically this is against the law, but violations of the flag code are not enforced.

Bottom line: if you’re going to feign patriotism, maybe do 5 minutes of research.

Its awful when you start sponsoring the National Anthem. I was at a @Suns game and the National Anthem was sponsored by NAU. I almost lost my lunch after seeing that. The Anthem should be the 1 thing NEVER touched by sponsors. Shame on them!

But if you were not offended by an advertiser flag appearing within the color guard, then don’t worry, Uni-Watch.com sports writer Paul Lukas is for you.  In his article, “Idiocracy Beckons: Blues Put Corporate Ad in Anthem Color Guard,” Lukas called it a "a nauseating spectacle" and wrote, “It’s hard to express how gross and tone-deaf this is. Frankly, I don’t see why color guards should be part of sporting events to begin with (interestingly, the Blues use them as a way to pimp group ticket sales, which is something I’ve never seen before — do other teams do this?). But if we’re going to have color guards, it would be nice if they could stick to, you know, the colors. Speaking of which, the team flag next to the Enterprise flag doesn’t belong there either.”

To Lukas’ point, the Enterprise Center does offer a sales package, whereby a group can purchase 30 mezzanine tickets and participate in the color guard. Though it does appear that this is ideally for “Military, police, fire, ROTC, scouts, or youth hockey teams” and not for corporate rental car companies.

In July of 2018, Enterprise Holdings Inc., based in St Louis, purchased the naming rights to the arena.

However, the history behind Enterprise Holdings Inc. (which owns Enterprise, National and Alamo Rental Car companies) is far more patriotic than just the waving of a flag during a hockey game.

The company was founded by Jack Crawford Taylor, a billionaire businessman from St Louis who started the company after serving in the US Navy during World War II. According to Washington University in St Louis, “Shortly after Jack Taylor enrolled in Washington University's business school in 1940, the United States entered World War II. He left school to join the U.S. Navy, and soon distinguished himself as a Naval aviator, flying F6F Hellcat fighters from the decks of the USS Essex and the USS Enterprise … He earned two Distinguished Flying Crosses and the Navy Air Medal while acquiring values of teamwork and discipline that have served him well as a businessman and community citizen.” 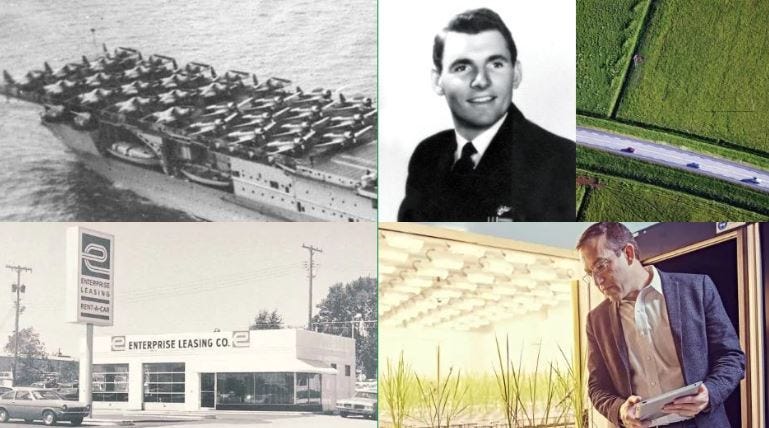 After the war, Taylor worked at Lindburg Caddilac and started a car lease business with a fleet of just seven vehicles.  Eventually, the business expanded and he named it Enterprise, after the USS Enterprise (CV-6), the carrier he served aboard during the war.

Now fast forward to today’s Twittersphere and the angry mobs who felt the Enterprise flag was an affront to the precious pre-game ceremony, Uni-Watch’s Paul Lukas found vindication when it appeared the team did not display the flag at the next game.

After I wrote yesterday about the disgrace of the @StLouisBlues having an @Enterprise advertising flag in their color guard during the national anthem on Saturday nite (left), they scrapped the ad for last night's game (right). Good for them! (My article: https://t.co/vPR6AQFTYp) pic.twitter.com/vcUP8JEMVK

Whether it was a result of backlash from the social media militia or not, we may never know.  But when one considers the history of the Enterprise name and the military service of founder Jack Taylor, worrying about whether their corporate logo is present during the singing of our national anthem seems really f#*^#g petty.

Game Five of The Stanley Cup Finals will be played in Boston on June 6, which is also the anniversary of the Allied invasion of Normandy, known as D-Day.

I hope sports fans will excuse this 'poor-planning' and still enjoy the game.