Did she or didn’t she?

Legend says Philadelphia seamstress and upholsterer Betsy Ross used her skill with a needle and thread to create Old Glory at George Washington’s request more than 240 years ago.

But, historical facts don’t necessarily back up that claim.

“As far as the big question is concerned — Did she make the first American flag?—every historical study has come to the same conclusion,” said Marc Leepson, author of Flag: An American Biography, in an interview. “There’s no good historical evidence that she did. But that doesn’t mean she didn’t. There’s simply a lack of documentation. Most historians believe the story is apocryphal.”

Supporting Ross as the creator of the first American flag are several organizations, including The Independence Hall Association.

“Betsy Ross sewed the first American flag,” the association writes. "When we view the flag, we think of liberty, freedom, pride, and Betsy Ross. The American flag flies on the moon, sits atop Mount Everest, is hurtling out in space. The flag is how America signs her name. It is no surprise that Betsy Ross has become one of the most cherished figures of American History.”

The Betsy Ross House notes that the true story of Ross’ involvement with the flag remains unclear and that the evidence for or against her involvement is persuasive, but not conclusive.

“Curious minds are encouraged to look at primary sources, examine evidence firsthand, and draw their own conclusions, not just with regard to Betsy and the flag, but with all contentious subjects."

Here’s what is known for sure: American colonists were using a number of different flags during the early 1770s to show their ire for British rule.

On June 14, 1777, the Continental Congress passed the nation’s first flag law: “That the flag of the United States be thirteen stripes, alternate red and white; that the union be thirteen stars, white in a blue field, representing a new constellation.”

Ross’ involvement with the flag was made public for the first time in 1870 by her grandson, William Canby in a paper titled, “The History of the Flag of the United States,” which was presented to the Historical Society of Pennsylvania. Canby said Ross became involved with the flag in 1776. He wrote:

“Sitting sewing in her shop one day with her girls around her, several gentlemen entered. She recognized one of these as the uncle of her deceased husband, Col. George Ross, a delegate from Pennsylvania to Congress. She also knew the handsome form and features of the dignified, yet graceful and polite Commander in Chief, who, while he was yet Colonel Washington had visited her shop both professionally and socially many times, (a friendship caused by her connection with the Ross family) they announced themselves as a committee of Congress, and stated that they had been appointed to prepare a flag, and asked her if she thought she could make one, to which she replied, with her usual modesty and self-reliance, that “she did not know but she could try; she had never made one but if the pattern were shown to her she had no doubt of her ability to do it.” 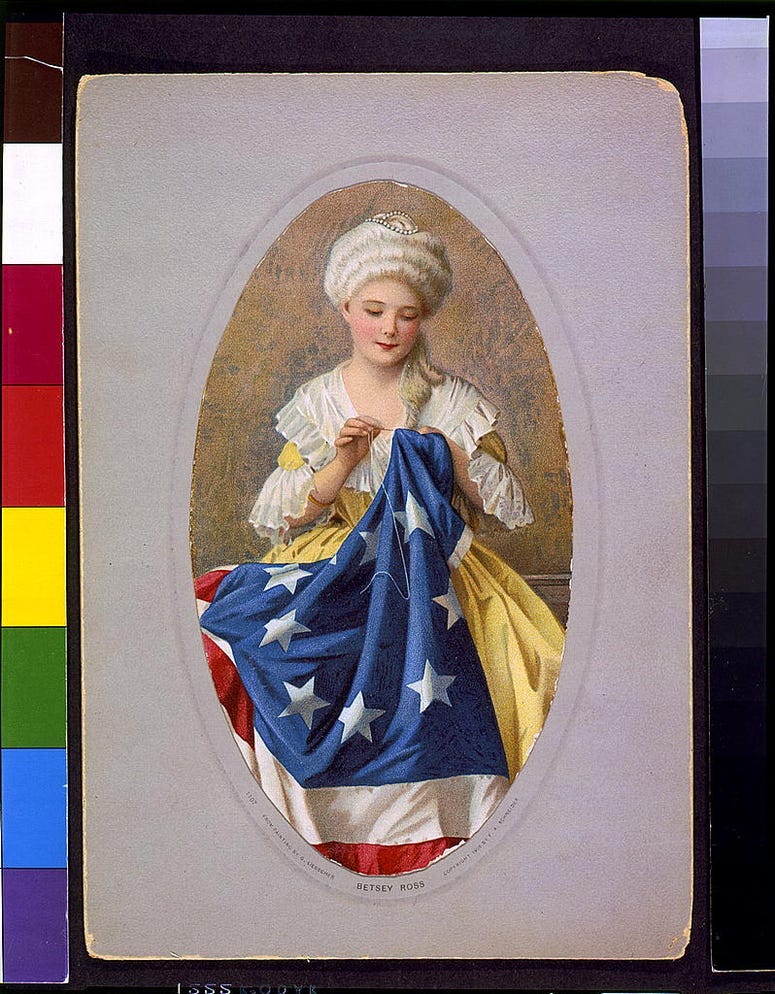 According to Canby, Ross soon came up with a prototype flag, which Congress approved. And the rest is history. Or is it?

Canby readily admitted he relied on the oral accounts of his family members when writing the paper, and no-one had seen Washington’s visit or his grandmother actually making the flag.

While who actually made the first American flag may be a matter of debate, some historians give credit to Francis Hopkinson for designing the first flag. Hopkinson was a New Jersey delegate to the Continental Congress who signed the Declaration of Independence. In 1780, he sought payment from the Board of Admiralty for his flag design but was turned down because he wasn’t the only one consulted on the design.

Want to get more connected to the great stories and resources Connecting Vets has to offer? Click here to sign up for our weekly newsletter.
<