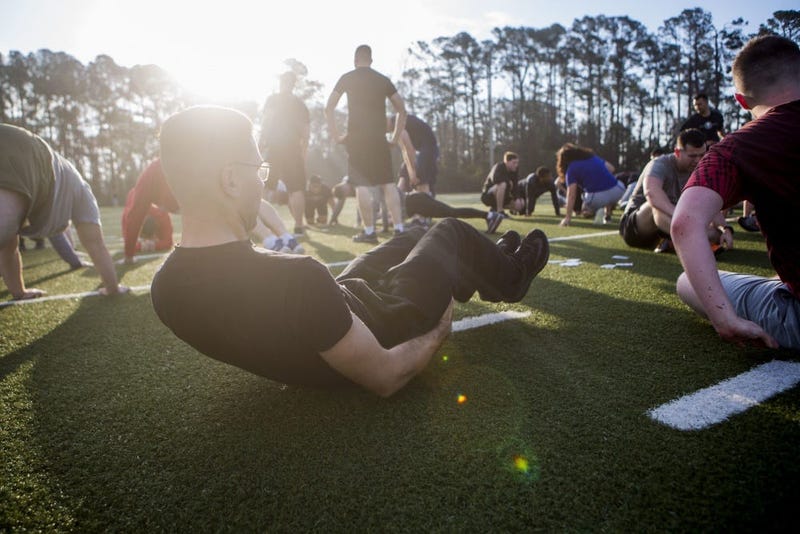 When you are in the service you are more than likely at your healthiest, between physical fitness training and maintaining standards within body composition regulations,  the probability of becoming overweight or obese is not great. However, when service members get out the odds are not in their favor. According to Veterans Affairs, 78 percent of veterans are considered to be overweight or obese.

“This is a higher rate than previous estimates in U.S. veterans and is somewhat surprising, since most military servicemembers are fit while serving and are predominantly men, who tend to have lower rates of obesity than women,” Dr. Elina Stefanovics, associate research scientist in Yale’s Department of Psychiatry and at the U.S. Department of Veterans Affairs, said in a statement.

The rate was particularly high among younger and non-white veterans, smokers and those with histories of trauma and post-traumatic stress.

But veterans can't collect disability pay because obesity is not a disability related to military service according to the Department of Veterans Affairs.

A Wounded Warrior Project survey of more than 33,000 Post-9/11 veterans found that nearly 52 percent of survey takers were obese and about 6 percent were morbidly obese.

Tracey Farrell, vice president of engagement and physical health and wellness for the Wounded Warrior Project told Connecting Vets explains there is more at play then veterans just eating unhealthy.

“There is loss of purpose many veterans face as they transition which may lead to depression, anxiety, and destructive behaviors or habits (i.e. overindulgence in food and alcohol; adoption of a sedentary lifestyle). Then there are the possible impacts on the body due to injuries, both visible and invisible, and treatment.”

VA research shows that young Iraq and Afghanistan veterans with PTS or depression have a higher likelihood to be overweight or obese.

Why isn't obesity considered a disability?

The Centers for Disease Control and Prevention and the National Institutes of Health recognize obesity as a disease. Medicare covers obesity treatment.

But though VA and other research suggest a connection between weight problems such as obesity and service-related disabilities like PTS, the new ruling by VA general counsel only reinforced the VA’s long-held position that obesity is not a qualifying disease or injury under the law for wartime or peacetime compensation.

Obesity can, however, be considered an “extra-schedular rating,” or a factor that can be considered when weighing existing disabilities, according to the VA. It can also be an “intermediate step” between issues that are not service related and those that are and factor into those disability determinations.

There is hope for veterans with weight issues, though. The VA offers programs for veterans struggling with weight and the Wounded Warrior Project offers intensive, in-depth programs and coaching to help get veterans on a healthier path.

“Veterans come to us for help losing weight, but during that process, they also realize that losing weight changes their lives in ways they may not have expected,” said James Herrera, WWP physical health and wellness director. “They get to be there for their families and they see an improvement to their mental health. It can make a world of difference and that’s why we do what we do.”