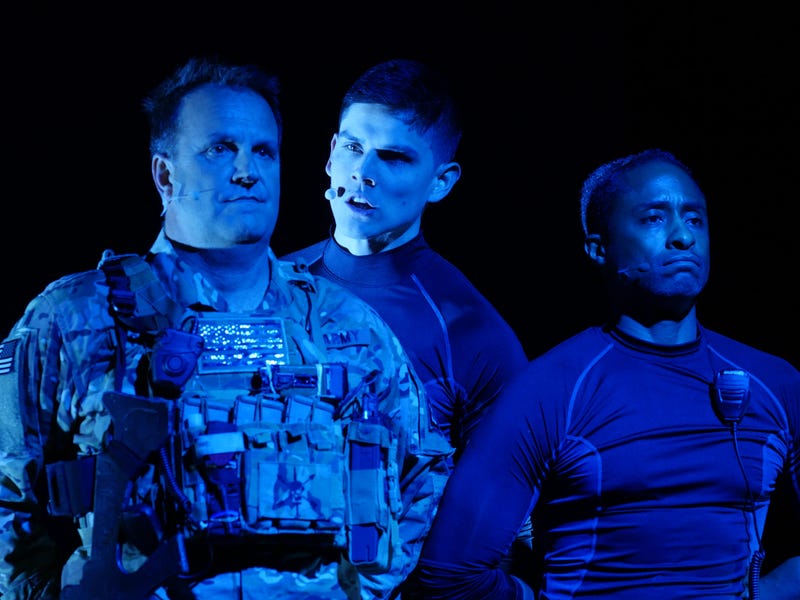 Photo credit Courtesy of Last Out: Elegy of a Green Beret. Used with permission.
By Jack Murphy , Connecting Vets

Films about American soldiers fighting the Global War on Terror tend to go in one of two directions. Some are anti-war and hopelessly depressing, others are unabashedly flag-waving pieces about the patriotism of our troops. If you believe that the truth lies within nuances somewhere in between, you may find "Last Out: Elegy of a Green Beret" to be the first time that the real story of the American fighting man and his family has been told. A lot of films, television shows, and books have attempted to do what the play's writer and star Scott Mann have done, but none have been this successful. One has to imagine that this is at least partially the result of Mann's military service as a Special Forces officer. Likewise, his co-stars Bryan Bachman served in the 82nd Airborne Division and Leonard Bruce served as a team sergeant in Special Forces. Ame Livingston, who nearly steals the show from Mann playing the protagonist's wife, comes from a military family.

'Last Out' threatens the audience with a heavy premise as the protagonist is a Green Beret who dies in the very first scene. The next hour and a half is about him reliving key moments in his life, revisiting the events that shaped him as a man from attending Special Forces training, meeting his future wife and deploying to Afghanistan. But what could be a heavy and depressing story turns out to be something else, showing the audience a more detailed and nuanced narrative about what it means to be a soldier. The highs and the lows, the camaraderie and frustration. It's all there, and that's no exaggeration, there are a lot of themes and content packed into an hour and a half.

"It sounds weird but part of it developed me," Mann told Connecting Vets when asked how he developed the script. "It came from a place that was not really me, a place as I was writing it, I didn't draw from my own experience. It is not autobiographical.  I felt a drive to tell the story of the quintessential Green Beret, the team sergeant who just keeps going and going." Mann said that the plot itself was developed from an insider's view of the village stability operations that Special Forces conducted in Afghanistan, a missed opportunity in his opinion. "Almost all of the stories in it either happened to me or I witnessed first hand. I wanted people to feel what it is like to live that life," Mann said.  It is surprising how detailed a look 'Last Out' takes at Special Forces culture. Others have tried, including other veterans, to shine some light on this clandestine world. However, it took the cast of 'Last Out' to really tell this story. They had the experience, the self-awareness, the empathy, and the voice to do something that others could not.

When asked why the story in "Last Out" has never been fully told before, and why Hollywood keeps getting it wrong Mann said: "I feel like today, people do not know who we are and in many ways, we don't know who we are. In many ways we've lost our ways and forgotten our roots. My voice and our voice was not being heard. The books and movies out there in Hollywood are one of two things, these spectacular shoot-outs or self-indulgent trauma fests."  Writing and starring in a play was a way for Mann to get the audience not just to think about the American soldier but a way to get them to feel it.

Speaking for myself, I found "Last Out" to be a breath of fresh air. The next time I get cornered by a civilian asking me if I miss Army life, or thanking me for my service, or haranguing me about the war in Afghanistan, I want to point them toward "Last Out." Scott, Ame, Bryan and Leonard say it better than any of us ever have or could. However, I had to ask Mann if reliving these events on a daily basis as the play is shown around the country has had a psychological impact on him. He replied that he has two breath coaches, two psychologists and a massage therapist he sees. A few professional acting coaches in New York City warned him early on that he had to protect himself from the content of the play itself.

"It has affected me but I feel like I'm more resolved than when I started," Mann said. "I feel like there is more resolution in stuff I had just pushed down inside of me and repressed the conversation. The overall resolution is a positive outcome, I feel like there is more optimal health in what this has given me personally." Writing the play led to some tense conversations between Mann and his wife early on in the process. The Special Forces wife is along for the ride in so many ways, and she also had some experiences that she had repressed and didn't want to discuss, but through the play, Mann and his wife were able to discuss these subjects and deal with them in a healthy way.

"There has been a healing attribute. You are opening up stuff but you are also processing it and metabolizing it."