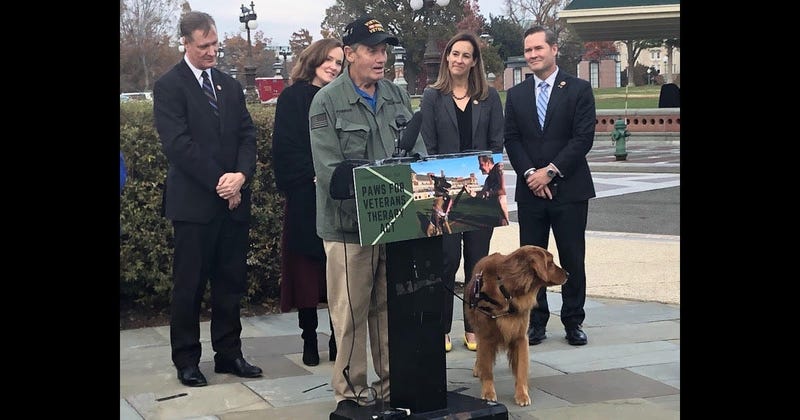 Walter Parker was drafted into the Army in 1966. In 1967, he would leave home for the first time to deploy to Vietnam.

While there, the specialist served in Saigon, was wounded and exposed to Agent Orange.

"I witnessed the worst things I never could imagine," Parker said on the grounds of the Capitol in Washington, D.C. Nov. 19. "Any veteran that goes to war comes back not knowing how to pick up those pieces."

Parker is in his third bout of cancer he says was caused by his exposure to Agent Orange. But more than his physical wounds, he says his invisible injuries stole his life.

"I couldn't get out in public," he said. "I couldn't do things other people could do. I was on the verge of suicide."

But Parker's family sought help. They helped him apply for a program in Wilmington, North Carolina, Paws 4 Vets, that provided him a service dog.

"My life changed forever," Parker said of the day he met Jackson, a specially trained retriever. They've been together for five years now. "When that dog looked into my eyes, I knew he could see my soul. I have never felt so good in my life ... what this dog does for me ... I'm living again. I'm living a life I never thought I'd live. My wife and I went to a see a movie for the first time in 20 years. I love life again."

It's stories like Parker and Jackson's that inspired members of Congress to introduce a bipartisan bill to create a pilot Department of Veterans Affairs program to get veterans with post-traumatic stress or other mental health concerns service dogs.

These dogs are specially trained to help veterans with PTSD, even interrupting nightmares

The Puppies Assisting Wounded Service Members (PAWS) for Veterans Therapy Act introduced by Rep. Steve Stivers, R-Ohio, and a group of other members, would require the Department of Veterans Affairs to implement a five-year program to issue grants to nonprofits that provide service dogs to veterans with PTSD or other post-deployment mental health concerns.

On Feb. 5, the House passed that bill by voice vote. But the still needs to receive a vote in the Senate before it can head to the president's desk to become law.

"Twenty veterans (die by) suicide daily," Parker said. "It could be prevented."

The PAWS Act provides the funds needed for veterinary health insurance for the dogs, hardware for the dogs to perform tasks to help their veterans and payment for travel for the veteran to bring the service dog home.

The bill is intended to make service dogs more accessible to veterans who want an alternative to traditional medical PTSD treatment and is an attempt to reduce the rate of veteran death by suicide.

"It's time to make this happen and save more veteran lives," Stivers said, adding that a similar bill passed the House last year but failed to make it through the Senate. This time, he said he knows there's support in the Senate for a companion bill.

Rep. Michael Waltz, R-Fla., said the bill is a multi-year effort and it's time for VA to recognize the benefits of service dogs for mental health concerns.

"When a veteran enters the VA, he or she deserves the entire menu of treatments available, not just a bag of pills," Waltz said. "We shouldn't be limiting. The benefits are clear. This legislation is so common-sense, it hurts."

Rep. Elissa Slotkin, D-Mich., said VA is "dragging its feet" on the issue and "tends to be a bit cautious ... they need a decade of data ... our veterans can't wait that long."

"We need to do everything we can to address mental health needs of our men and women in uniform," Rep. Kathleen Rice, D-N.Y., said. "The evidence is very clear."

“This bill is essential to veterans who need psychiatric service dogs,” said Christopher Baity, founder and executive director of Virginia-based Semper K9 Assistance Dogs. “It will ensure that the highest quality service dogs are being placed with those veterans by reputable organizations.”

“It is heartbreaking that 20 veterans take their own lives each day,” said Rep. John Rutherford, R-Fla., who introduced a similar bill earlier this year and is now one of the sponsors of the current bill. “We must do more to help those with PTSD and other service-connected forms of trauma. Providing service dogs to veterans is a proven therapy for PTSD, but for many, the cost associated with training and raising these animals is too great. The PAWS Act will support organizations who pair service dogs with veterans to help our warfighters lead productive and successful lives once they return to civilian life.” 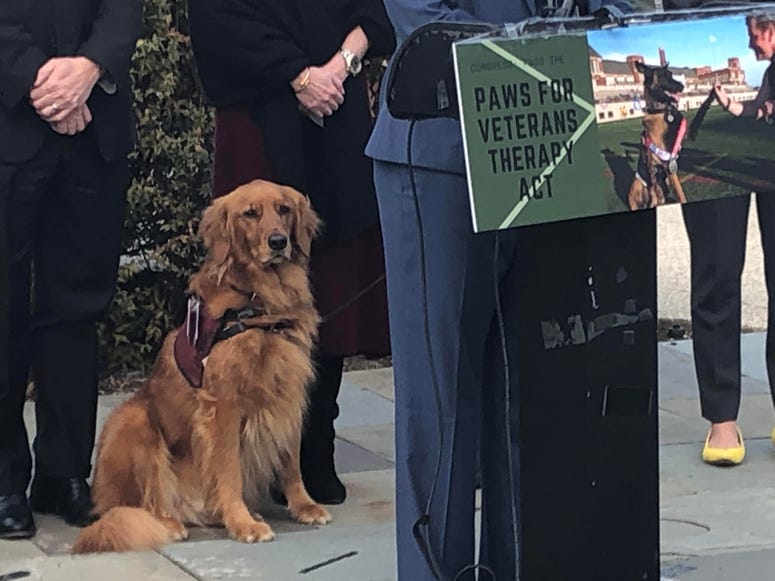 The bill also requires the VA to develop data to measure how veterans’ psychosocial functions change because of the service dogs and any changes in dependence on prescription narcotics.

To be eligible to receive the grants under the act, nonprofits would have to meet certain requirements, including:

“Funding through PAWS will be focused only on organizations that adhere to national standards created and maintained by the leading experts in providing service dogs to military veterans,” said Jeremiah Blocker, executive director of the ASDPMV. 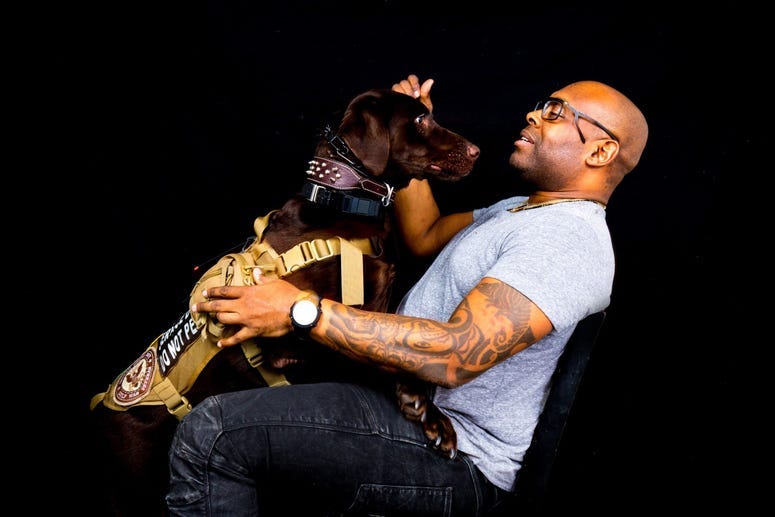