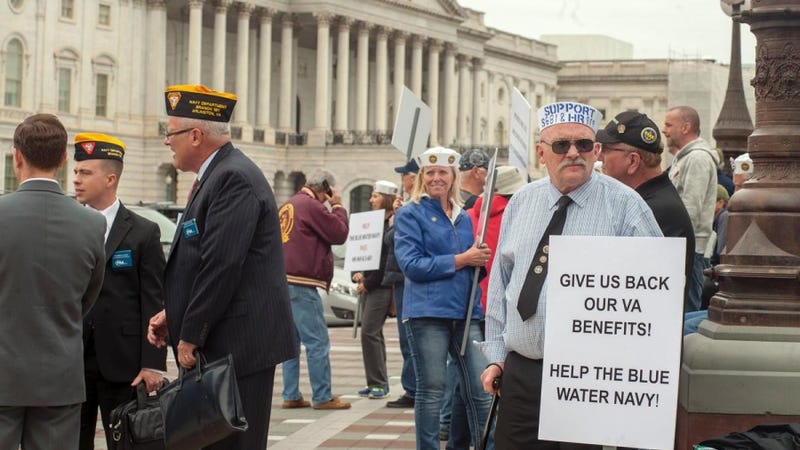 President Donald Trump has signed into law the "Blue Water Navy Vietnam Veterans Act," requiring the Department of Veterans Affairs to provide disability benefits to veterans who served in the waters off the coast of Vietnam.

The bill is just one more provision in a decades-long fight to guarantee the same benefits to nearly 90,000 Navy veterans who served in the waters offshore of Vietnam that their land and brown-water comrades are entitled to after potentially being exposed to toxic Agent Orange.

Two weeks ago, the Senate passed the bill unanimously and the House passed it unanimously before Memorial Day.

Earlier this month, the final legal battle for Blue Water veterans to qualify for VA disability benefits for exposure to the cancer-causing toxin appeared to be over.

The Justice Department dropped its appeal of a federal court decision from earlier this year.

Procopio v. Wilkie reversed a 1997 VA decision to deny that so-called "Blue Water" veterans were exposed to Agent Orange while serving in the waters off Vietnam. The Procopio decision ruled that the VA should presume those sailors were exposed to the toxic chemical at some point during their service, and grant them the same benefits as other Vietnam veterans.

The Supreme Court granted the DoJ several extension to appeal the lower court ruling. The extension did not prevent the VA from beginning to accept Blue Water veterans' requests for benefits, however, and Congress took steps to extend disability benefits to some of those veterans, even if DoJ appealed, through this bill.

So when DoJ said it wouldn't appeal or argue to overturn Procopio, Blue Water advocates celebrated. But while Congressional leaders applauded the legal victory, they maintained that they still needed to pass their own legislation, which they said would unequivocally grant benefits to Blue Water veterans who served in the waters off Vietnam in a specific geographic area.

Mike Yates, national commander of the Blue Water Navy Vietnam Veterans Association, told Connecting Vets Wednesday "it doesn't take a legal expert to see that by defining the geographic points and calling them 'offshore' (the bill) will limit the Procopio ruling ... I hope (lawmakers and veteran service organizations) take the credit when early next year Blue Water Navy Vietnam veterans find out that just because their ship was just outside by a couple of miles (of) the geographic points that they are no longer covered."

The Veterans of Foreign Wars celebrated the president's decision to sign the bill.

“Tens of thousands of Blue Water Navy veterans of the Vietnam War and dependent children born with spina bifida due to a parent’s toxic exposure will now benefit from this new law,” VFW National Commander B.J. Lawrence said in a statement. “The VFW is proud to have helped lead the charge to return these benefits to these deserving veterans and to expand existing benefits to dependent children. We look forward to the Department of Veterans Affairs publishing implementation guidance on their website very soon.”

Want to get more connected to the great stories and resources Connecting Vets has to offer? Click here to sign up for our weekly newsletter.
Connecting Vets reporter Elizabeth Howe contributed to this report.