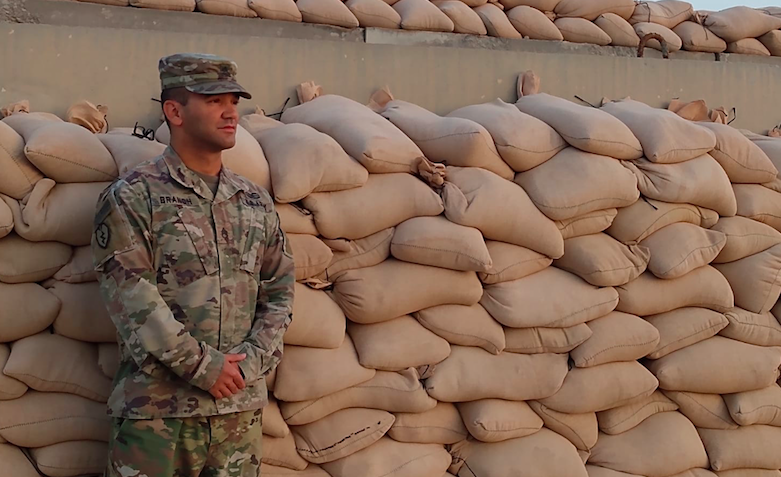 Sgt. Ricardo Branch is getting screwed by the Army — again.

He's not the first, nor will he be the last soldier to experience a terminal shafting by military bureaucracy but Branch's saga is unique in the sense that the Army came back to screw him a second time. Branch is about to be involuntarily discharged for the second time, all stemming from his chain of command's outright bizarre attempts to punish the soldier for committing the ultimate sin — doing his job.

The controversy began back in 2014 when Branch was an NCO working as a public affairs officer for the famed 160th Special Operations Aviation Regiment (SOAR) also known as the Night Stalkers, since they fly special operations missions, mostly at night. Members of the unit were visiting a Boeing facility in Mesa, Arizona when they mentioned to employees there that they had been involved in the 2011 raid in Abbottabad, Pakistan in which Osama Bin Laden was killed.

A writer working for Boeing named Malley T. Hislop began writing an article which mentioned 160th's involvement in the raid, which was then forwarded to 160th for routine review. That article landed on Branch's desk and he conducted his duty, reporting that the one sentence in the article about his unit's involvement in the Bin Laden raid should be redacted as that information was still sensitive.

Branch wrote this up in an internal email to his superior, Maj. David Rousseau.

"Sir, this sentence needs to be removed because DoD policy hasn't released 'all' the names of the units in the raid," Branch recalls writing in that internal email.

Rousseau concurred with the recommendation, sent it through the chain and the one concerning sentence was deleted from the article prior to publication. However, someone clearly was not happy with Branch's correction. Branch was accused of leaking classified information in a non-classified Army email.

The charge was dumbfounding, especially considering that Adm. William McRaven had made public statements about 160th's part in the Bin Laden raid and that the same information had been twice published on the Army's official website.

Branch was given a company-grade Article 15 non-judicial punishment for sending the email. Feeling that he was trapped in a toxic work environment, he requested to be assigned to another unit. When he was, 160th wrote him a very negative Non-Commissioned Officer Evaluation Report (NCOER) which said that Branch showed immaturity through multiple operational security violations and that he should not be promoted until he gains maturity and accepts responsibility for his decisions. That bad NCOER triggered an Army protocol known as Qualitative Management Program (QMP), which discharges soldiers who are not meeting military standards.

Branch appealed the decision to discharge him out of the Army all the way to Washington, D.C., but to no avail. Connecting Vets reviewed all of Branch's NCOERs and found all of them to be positive except for the one at 160th describing operational security issues. Army Special Operations Command declined to comment for this story.

"Our budget was depleted, and I was mentally and emotionally drained from the battle," Branch told Connecting Vets. "I look back at the day I left out-processing with regret. I remember when I got up out the chair to leave. The associate handing me my DD-214 gave me the biggest hug and said it will be all right." A family man, with a wife and children, Branch was suddenly an unemployed veteran.

While he had been involuntarily separated, there was some hope for Branch to continue to serve. On his discharge papers, his re-enlistment code was "1," meaning he was eligible to re-enlist.

Branch rejoined the Army in January of 2018 after working a temp job in Tennessee, went through Advanced Individual Training and became an early warning system operator and maintainer within an air defense unit. While there, he received positive NCO evaluation reports from his superiors. Then, in October of 2019, he was informed that his records were incorrect. The Army told Branch that he never should have been eligible to rejoin the Army and that his current enlistment was fraudulent.

"I was first told I was being QMP'd and then later accused of an erroneous enlistment, then it became a fraudulent enlistment," Branch said.

When Branch took the issue to his chain of command he says that they told him that their hands were tied and there was nothing they could do for him. Instead, they deployed him to Kuwait to be a unit bus driver until his paperwork was processed

“HRC saying my return is a mistake should understand that soldiers leave and return all the time,” Branch told Connecting Vets. “The separations department at HRC gave me an RE (re-enlistment) 1 for completing my enlistment contract from start to finish and now it's my fault they made a mistake?”

The decision was made to fly Branch back to the United States for out-processing. His trip was delayed due to the COVID-19 pandemic, but he has now arrived stateside and will undergo a mandatory quarantine while he continues to seek an appeal board review prior to being discharged. Branch wants an appeal board to also look at evidence that he and his legal representative submitted to the Army but he says was not examined prior to his first discharge.

Additional evidence includes a letter of support from Rousseau and emails reviewed by Connected Vets stating that Hill released the same information that Branch was accused of divulging two weeks prior in a since-deleted Soldier Magazine article. Evidence also includes McRaven's CNN interview which divulged the same information, SEAL Team Six operator Rob O'Neill's memoir which was cleared for publication by the Defense Department and the supposedly classified information already appearing on the official Army website.

When Branch reached out to McRaven for help, he replied in an email reviewed by Connecting Vets that, "unfortunately, as a retired officer there isn’t much I can do."

At the time, McRaven was the highest-paid university leader in America, making well over a million dollars a year. McRaven has had little issue in speaking out publicly on behalf of former Director of National Intelligence Joe McGuire, speaking out against the Trump administration or sharing details about the Bin Laden raid.

Last month, Branch, who is only two and a half years away from retirement, read an article titled, “Exclusive: Legendary Special Operations aviator reveals Bin Laden mission details for the first time” published in the Army Times. In the article, a 160th aviator spills secrets that Branch said he had protected all along, while the Army punished him.

Questions remain as to why the military has pursued such draconian measures against Branch. What is known is that the original incident in 2014 where Branch recommended a redaction in an article written by Boeing stems from 160th Special Operations Aviation personnel visiting Boeing's Apache helicopter factory in Arizona where they were looking at procuring a new unmanned aerial vehicle platform.

A 2011 Inspector General report states that Boeing overcharged the Army $18 million for Apache and Chinook helicopter parts and overcharged the Defense Logistics Agency by 50 percent for other aircraft parts. Additionally, the Inspector General identified excess DOD inventory that could satisfy current and future contracts with Boeing to the tune of hundreds of millions of dollars for additional helicopter parts.

Meanwhile, Branch awaits his fate as the Army prepares to discharge a soldier with multiple deployments to Iraq, who did his job, and whose family relies on his future in the military.