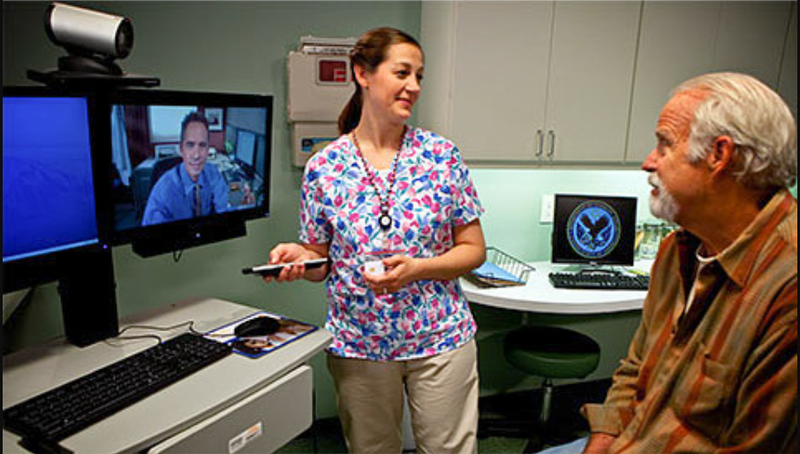 The Department of Veterans Affairs is increasingly depending on telehealth, including online and phone appointments, during the coronavirus pandemic, with plans to expand. But many veterans, especially vets of color and those who are homeless, lower-income or live in rural or remote areas, struggle with access to Internet service and technology to get that virtual care.

VA officials touted the department as a leader in electronic healthcare options, including the 9 million more telehealth appointments VA has completed so far this year compared to last year, to lawmakers on Capitol Hill Tuesday. But representatives of minority veterans, including Native Americans and Native Alaskans, said that telehealth option is not always available to all vets.

Veterans can now access care "anywhere in the country" through telehealth, Veterans Health Administration consultant to the deputy undersecretary for health Jennifer MacDonald said. But veteran advocates said it's not that simple.

VA's telehealth options operations have caused "a barrage of issues ... that deeply and disproportionately impact the minority veteran community's ability to take advantage of benefits intended to ease and increase medical access, despite a pandemic," said Lindsay Church, executive director of Minority Veterans of America. "It assumes a veteran has stable broadband connection, a working computer or phone, a private space in which to sit for the appointment and an environment lacking disruption."

VA's telehealth system made healthcare more accessible "only for those who already had access to technology, or the ability to purcahse it," Church said.

Congress earmarked about $2.2 billion of the nearly $20 billion in pandemic emergency funds for VA specifically for telehealth.

While some veterans have struggled with access to internet and technology long before the pandemic, it has complicated matters further. Advocates have told lawmakers previously that public internet access spots, such as libraries or cafes, have been shut down for months because of the pandemic.

VA has partnered with some Veteran Service Organizations, as well as private companies such as Walmart, to create hubs for telehealth, with computer stations set up for veterans to go for their online appointments. But even many of those were shut down during the pandemic, officials acknowledged. VA officials also said they were working to get thousands of tablets, phones and computers to veterans, but advocates said few veterans in need had seen those resources yet.

The FCC estimated that by the end of 2017, at least 21.3 million Americans didn't have access to adequate broadband, though other research has shown that number could be closer to 113 million, Church said.

For Native American and Native Alaskan veterans, access to adequate internet can be particularly challenging, said Vietnam veteran Chief Bill Smith of the Valdez Native Tribe, vice chairman of the Alaska Native Health Board and vicechairman and Alaska-area representative for the National Indian Health Board.

Smith said VA care for Native veterans was "substandard" before the pandemic, and has only worsened. Native veterans service in the U.S. military at a higher rate than any other group, but remain among the poorest, least insured vets with the least access to VA care.

"This is a disgrace," he said.

A 2019 FCC report showed that fewer than 47 percent of homes on Tribal lands had sufficient broadband access, Smith said., adding that the "sobering statistics" about access "once again" show a disparity between healthcare accessibility for native veterans compared to other vets.

In areas with many fluent Native language speakers, telehealth also has led to a lack of "culturally and linguistically appropriate virtual care," Smith said.

It's also unclear how veterans of color are being affected by COVID-19, since VA officials have so far refused to provide racial or ethnic breakdowns of the department's coronavirus cases.

Telehealth is challenging for veterans living in areas without adequate broadband access, including more remote or rural areas, but also for veterans struggling to afford that service or technology, particularly during the pandemic.

"For households that do not have the economic means to purchase computers, adequate cellular devices, or maintain internet/broadband connectivity, the ability to attend appointments is a barrier to care," Church told lawmakers.

Veteran unemployment is about 12 percent, and slightly higher for post-9/11 veterans.

Telehealth also is not always an option for domestic abuse survivors, particularly without safety and security measures. VA has safe messaging options for veterans who may be considering suicide, but does not have those tools open for domestic violence survivors, Church said.

"Leaving a digital footprint can be deadly for survivors and historically, barriers that abuse victims experience are used to further control and victimize them," she said.