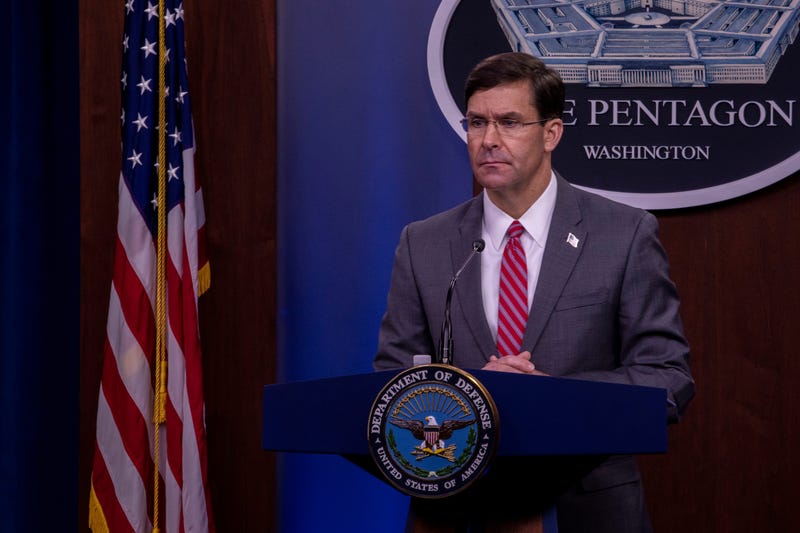 Secretary of Defense Mark Esper was "terminated" on Monday, President Donald Trump tweeted. Last week he reportedly prepared a letter of resignation in anticipation of being pushed out after the election.

"I am pleased to announce that Christopher C. Miller, the highly respected Director of the National Counterterrorism Center (unanimously confirmed by the Senate), will be Acting Secretary of Defense, effective immediately," the president tweeted Monday afternoon. "Chris will do a GREAT job! Mark Esper has been terminated. I would like to thank him for his service."

Three current defense officials told NBC News the secretary prepared a letter of resignation last week because he is one of the cabinet officials expected to be pushed out once the presidential election was decided. It’s a common practice for cabinet officials and other government staff to have undated resignation letters prepared in the event the president wishes to replace them moving into a second term.

However, the "process usually occurs after the election results are clear."

Esper has been at odds with Trump on several occasions in recent months. In June, he said he did not support invoking the Insurrection Act despite the president’s threats to deploy active-duty troops if governors do not act to “quell violence” in their states.

“The option to use active-duty forces in a law enforcement role should only be used as a matter of last resort and only in the most urgent and dire of situations. We are not in one of those situations now,” Esper said at the time. “I do not support invoking the Insurrection Act.”

Also in June, Esper distanced himself from the clearing of Lafayette Square during which protesters were reportedly tear-gassed to clear the way for the president's party -- which included Esper and Chairman of the Joint Chiefs of Staff Gen. Mark Milley. Milley has also since apologized for his presence that evening -- he was wearing uniform in violation of the Hatch Act.

In July, Esper implemented a policy that effectively banned the symbol of the Confederate flag from all military installations, again, despite Trump's insistence that the symbol be allowed to stay. Esper also delegated the issue of renaming military installations that carry the names of Confederate officers to Secretary of the Army Ryan McCarthy rather than implementing policy that would protect the names, as Trump believed they should be.

Deputy Secretary of Defense David Norquist would normally be in line to become acting secretary in the event the post was empty, but the president appears to have decided on an alternative.

Esper was sworn in as the 27th secretary of defense in July of 2019. He graduated from West Point in 1986 before commissioning into the Infantry, serving in the Army for more than a decade, and continuing on in service in the National Guard until 2007. The 26th secretary of defense James Mattis resigned in December of 2018 over the Trump administration’s decision to withdraw U.S. troops from Syria. --Eric Brooks of Radio.com contributed to this report.
Reach Elizabeth Howe on Twitter @ECBHowe.Want to get more connected to the stories and resources Connecting Vets has to offer? Click here to sign up for our weekly newsletter.