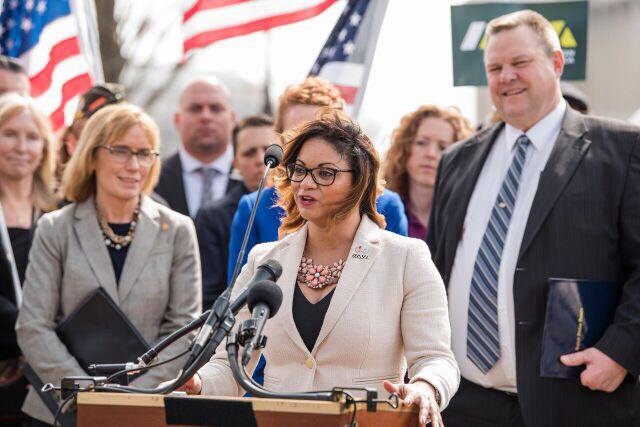 Army Capt. Melissa Bryant is a third-generation combat veteran, and she said she’s been harassed by fellow veterans at the VA because she’s a woman.

“I’ve been asked where my sponsor is, where my husband is,” Bryant said at a Senate Veterans Affairs Committee hearing Wednesday. “It’s a universal experience … the harassment and catcalls.”

Bryant, who now serves as chief policy officer for Iraq and Afghanistan Veterans of America (IAVA) said she’s been told she can use the back door of the VA if it would make her more comfortable.

Bryant was asked by members of Congress about the Deborah Sampson Act, an omnibus bill of intended improvements for women veterans’ benefits and care. Included in that bill is a plan to spend $20 million to retrofit existing VA medical facilities to support women’s care. Those changes could be as simple as a curtain to shield a woman veteran during private medical procedures and other ways to make women veterans feel more safe and welcome.

The hearing covered discussion on 16 other bills intended to improve veteran care -- from making sure VA hires qualified doctors and holds those doctors accountable, to extending care to reservists, making sure VA technology is accessible to disabled service members, providing transport to VAs for veterans living in rural areas, preventing veteran homelessness and more.

“We have 2 million women veterans,” Sen. John Boozman, R-Ark., said. “There is simply no excuse for … the lack of respect” shortage of doctors and gender-specific providers and other barriers to care for women veterans.

But the focus of much of the hearing, as has been the focus of several Congressional hearings this session, was veteran suicide.

Sen. Patt Murray, D-Wash., said another veteran died by suicide in her home state over the weekend at a VA medical center.

“We cannot just stand by while this epidemic claims more of our veterans,” she said. “It crushes families … It’s overwhelming our communities. I really believe this committee needs to hold some hearings and take some action … on this growing tragedy.”

“What resources or assistance does VA need from Congress to move the needle so we don’t continue to talk about the same number year after year?” Boozman, asked, referring to the 20 veterans who die by suicide daily, according to the VA.

Dr. David Carroll, executive director of mental health and suicide prevention at the Veterans Health Administration said suicide is not just a mental health issue, and Congress, the VA, VSOs and others must reach veterans in the community to address problems beyond medically treated mental health.

Carroll echoed similar statements from acting VHA head Dr. Richard Stone, who has repeatedly said that the VA could always use more funding to improve care, but that despite increased funding, suicide rates have not budged. Preventing suicide is a complex issue, Carroll said, and the VA cannot address it alone.

Some of the legislation discussed Wednesday would address mental health and suicide prevention, including the Commander John Scott Hannon Veterans Mental Health Care Improvement Act, another omnibus bill. That bill includes grants for organizations providing mental health wellness services to veterans; calling for a study of complementary and alternative care such as animal therapy, yoga, meditation, acupuncture, and tai chi; studying how effective VA efforts have been to combat suicide; and hiring suicide prevention coordinators for every VA.

“If there were a silver bullet for suicide prevention, we would have used it,” Bryant said. “This needs to be not just all-hands, but all methods of outreach … breaking down the stigma of mental health issues during transition and normalizing the conversation.”

But VA representatives pushed back on some of the legislation, saying the department didn’t support some bills because they were too detailed and could limit the VA’s ability to be flexible in finding the best ways to care for veterans, according to Dr. Teresa Boyd, assistant deputy undersecretary for health at VHA.

“We’ve done a lot of things, but it hasn’t affected the numbers,” Sen. Jon Tester, D-Mont., said of veteran deaths by suicide. “It hasn’t even gotten us close to the point where we can say we’ve done some good stuff here, (or) we’ve moved the ball.”

Tester said suicide prevention also needs to focus on reservists, who currently aren’t eligible for mental healthcare through the VA.

“We’re using reservists differently and they’re coming back with problems quite frankly we created for them,” he said. “We shouldn’t be asking them to serve if we can’t step up for them.”

But Tester said the VA needs to provide input on legislation, including the Veterans Mental Health Care Improvement Act, or “We’re going to do what we think is best without your input.”

Bills discussed at the hearing:

If you or someone you know needs help, contact the Veteran Crisis Line 24/7 at 1-800-273-8255 (select option 1 for a VA staff member). Veterans, service members or their families also can text 838255 or go to veteranscrisisline.net.
Follow Abbie Bennett, @AbbieRBennett.