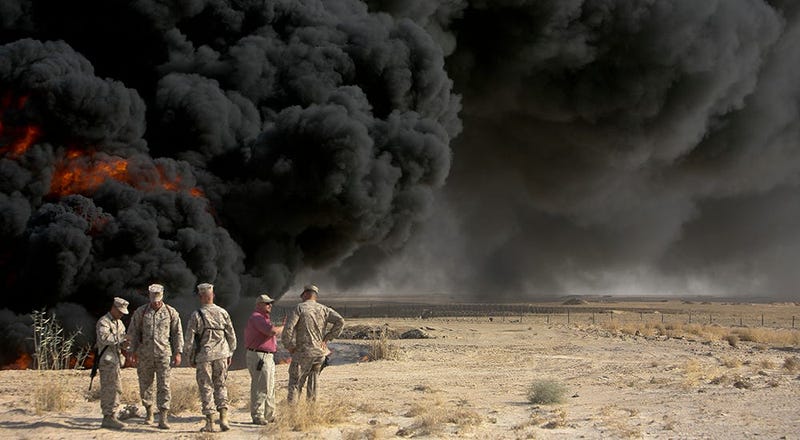 This story originally published on July 31, 2020 at 9 a.m. EST. It was updated on Sept. 23, 2020 at 4 p.m. EST to reflect that the bill passed out of the Senate Veterans Affairs Committee, and lawmakers' comments.

Veterans exposed to toxic substances during their military service could qualify for additional benefits and care from the Department of Veterans Affairs under landmark legislation passed out of a key committee Wednesday.

The Toxic Exposure in the American Military (TEAM) Act creates sweeping mandates for VA to further research, track and care for eligible veterans who fall ill because of exposure to toxic substances during service -- perhaps the most comprehensive legislation on military toxic exposures ever introduced in Congress.

The TEAM Act was introduced by Sen. Thom Tillis, R-N.C., who represents one of the largest populations of troops and veterans in the country, including the largest Army base in the world, Fort Bragg. It passed out of the Senate Veterans Affairs Committee Wednesday with unanimous support and now heads to the Senate floor.

The bill aims to allow VA to potentially expand benefits and health care to thousands of veterans by allowing VA to add more presumptive conditions for troops exposed to toxic substances, such as herbicides and burn pits, and provide consultations, testing and treatment, among other major mandates. Toxic exposures have increasingly gained attention as veterans and troops sicken with rare cancers, respiratory and fertility issues, especially those who served in Afghanistan and Iraq.

Tillis called the committee's vote a "positive step to ensure that all veterans are given a fair and uniform process to receive the health care and benefits to which they are entitled following exposure to toxicants during their service.

"The men and women who served our country deserve better," the North Carolina senator said in a statement following the vote.

The coalition urged the Senate to take up the bill quickly.

"Service members and veterans who are suffering from toxic exposure-related illnesses are in desperate need for quality care," the TEAM Coalition said in a statement.

Establishing a firm link between toxic exposures and the illnesses they cause has proved difficult over the years, as Pentagon records of exposures are notoriously incomplete or nonexistent -- including the locations of burn pits and other hazards -- leaving veterans waiting as they grow more ill or die,

"I know firsthand the obstacles thousands of veterans who have been exposed to toxicants while serving our country have had to overcome. Veterans stationed at Camp Lejeune spent decades pushing for documentation of their exposure and fair treatment for the damages caused by the military, but this cannot continue to be the norm,” Tillis said in a statement following the bill's introduction in July. “After working alongside veterans who were stationed Camp Lejeune and fighting for service members exposed to toxicants from burn pits in Afghanistan and Iraq, it’s clear the men and women who served our country deserve better. The bipartisan TEAM Act ensures that all veterans are given a fair and uniform process to receive the health care and benefits to which they are entitled following exposure to toxicants during their service.”

The TEAM Act is the culmination of nearly two years of effort from the TEAM Coalition of veteran service organizations, researchers, advocates and others working to codify care for veterans afflicted by their toxic exposures.

“The TEAM coalition has made great strides since we launched this effort last June, and we’re all very proud of the work we have done collectively,” said Wounded Warrior Project CEO, retired Lt. Gen. Mike Linnington. “We’re honored to stand alongside Sen. Tillis and others, who are championing this necessary reform to help those coping with these specific wounds of war.”

Veterans eligible for consultations, testing and treatment under the bill would include those who received hazardous duty pay for more than one day, or who have been identified by the Pentagon as possibly exposed inside or outside the U.S. to burn pits or other toxic substances or visited a location where service members were potentially exposed.

The authority to decide which illnesses qualify as service-connected resides with the Secretary of the VA.

The bill gives authority to VA leadership to determine illnesses that qualify for service-connected benefits, as has been the case in the past. But to avoid delays Agent Orange-exposed veterans and others have faced as VA weighs whether to expand benefits, the bill requires VA to make a decision within 60 days of a National Academies of Sciences report linking illnesses to exposures.

In a call with reporters in July, VA Secretary Robert Wilkie said VA did not have the authority to provide benefits to veterans exposed to toxic substances after Sept. 11, 2001, until Congress passes legislation.

"Now the Congress does have to change legislation, change the statute when it comes to the categorization of disability benefits and the categorization of the percentage that a veteran is considered disabled," Wilkie said, though he prefaced by saying, "we don't deny medical services to any veteran who is sick."

Wilkie, a colonel in the Air Force Reserve and son of a Vietnam veteran, said, as he often has, that VA does not want veterans of more recent conflicts to face the decades-long wait for recognition and benefits that some Vietnam-era vets still face.

"My pledge ... as the son of the Vietnam combat soldier is we don't want our veterans to go through what Vietnam veterans went through in terms of not knowing," he said. "But because of the disability ratings, that has to come through legislation."

Tillis' introduction of the TEAM Act came just days after the House passed a slate of new burn pit measures in its draft of the annual defense authorization bill and Capitol Hill hearings on how VA should handle toxic exposures, even as scientific evidence is pending to prove their connections to a range of illnesses.

The bill's passage out of committee came the same day the House held a hearing on veteran exposures, including burn pits, and how VA is handling providing care to those vets.

The future of the bill is uncertain, with few legislative days remaining on the calendar this Congress, a major election approaching -- including for sponsor Tillis -- and major legislation left undone, including the National Defense Authorization Act Congress is expected to compromise and vote on in November or December. If the bill passes the Senate, it still must head to the House for consideration before it can move on to the president for final approval.