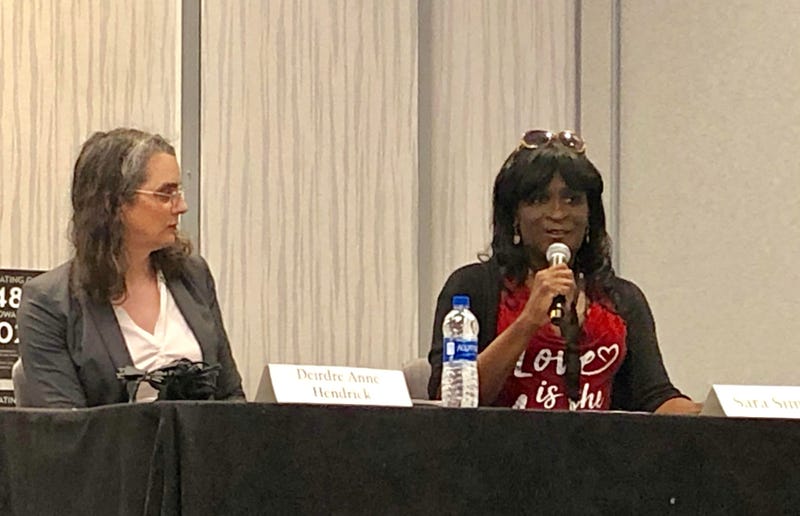 Sara Simone is an Army veteran who served her country for years. She faced eviction, job loss, rape, abuse and post-traumatic stress because of who she is. But Simone is determined to help veterans struggling with homelessness.

Simone is a transgender woman.

“Eight years ago was the happiest moment of my life,” Simone said during a panel discussion at the National Coalition for Homeless Veterans conference in Washington, D.C.  “It was the day I stopped pretending to be someone I’m not and ended a lifetime of pain and denial.

“I was so proud to see the Army that I loved so much had progressed so far,” she said of her ability to serve as a transgender woman, including having her DD-214 changed.

It was a moment of triumph for Simone, who had been evicted, lost her job and was homeless multiple times after coming out and transitioning.

“I never in my life thought I would be homeless,” she said.

Simone now works as a contractor for the Veterans Administration in Washington, D.C., helping homeless veterans find permanent housing and resources, in addition to her work as a transgender advocate with Equality Virginia.

Years after the “don’t ask, don’t tell” policy was overturned, Simone and other LGBTQ veterans have watched the federal government backslide, outlawing transgender people from service, discharging those already serving.

Hendrick said she fears service members discharged because they are transgender, or veterans who were discharged under the original “don’t ask, don’t tell” policy, will miss out on benefits they’re entitled to, which could contribute to homelessness or worse.

“Many LGBTQ veterans may no longer feel like a member of the veteran community,” she said. “Many have no idea they have rights to these benefits.”

“I may not be able to help them,” she said. “Many of them may still face discharge because of who they are.”

Those who manage to stay in the service will still face discharge if they transition, Hendrick said, leading some to continue to hide their true selves, contributing to mental health issues already rampant in the transgender community, including an extremely high rate of suicide and self-harm, rates higher even than the average rate for veterans -- a 20-per-day statistic that has startled some members of Congress into naming it their top priority.

So far, it's unclear what the discharge status will be for transgender troops removed from service, Hendrick said, “We just don’t know.”

Unfortunately, there aren't many resources for those transgender troops at risk of discharge.

Leon Winston, chief operating officer and housing director for Swords to Plowshares, the same organization that helped him when he came out as a gay man in the Navy and faced homelessness and addiction, said his organization is developing legal self-help guides to assist veterans and service members dealing with issues that could affect their benefits and service status.

Simone said her concerns now extend beyond troops being removed from service to veterans like her who fear a ripple effect.

“The war against trans people has touched many levels of the federal government,” she said. “I’m in fear of what may happen at the VA.

“When people finally get a taste of freedom, there is no going back. The LGBTQ community in this country will have freedom.”

If you or someone you know needs help, contact the Veteran Crisis Line 24/7 at 1-800-273-8255 (select option 1 for a VA staff member). Veterans, service members or their families also can text 838255 or go toveteranscrisisline.net.
Follow Abbie Bennett, @AbbieRBennett.