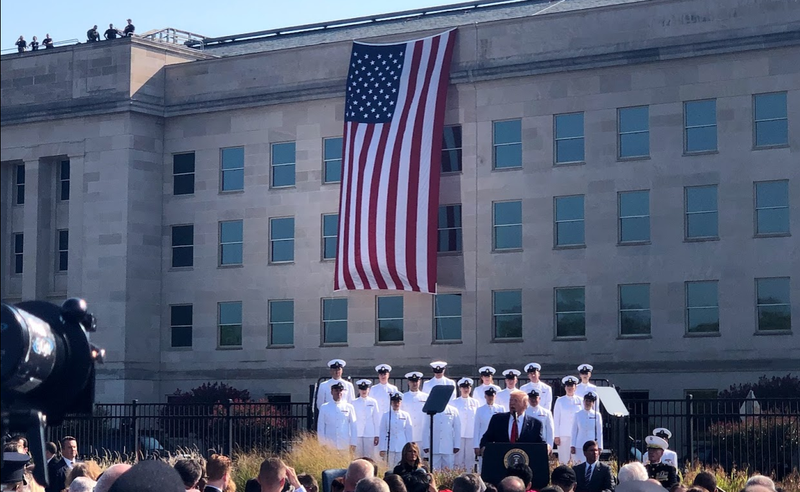 An American flag hung in the background, draped over the portion of the building that was impacted by American Airlines Flight 77 which killed all 59 passengers on board and 125 individuals inside the Pentagon. The flag was unfurled over the spot at sunrise on Wednesday — as it is on Sept. 11 every year.

Secretary of Defense Mark T. Esper, Chairman of the Joint Chiefs of Staff Marine Gen. Joseph F. Dunford Jr. and President Donald Trump hosted the ceremony which was not open to the public. Instead, the event welcomed first responders, building survivors, and the family members of those lost to observe the memories of loved ones. 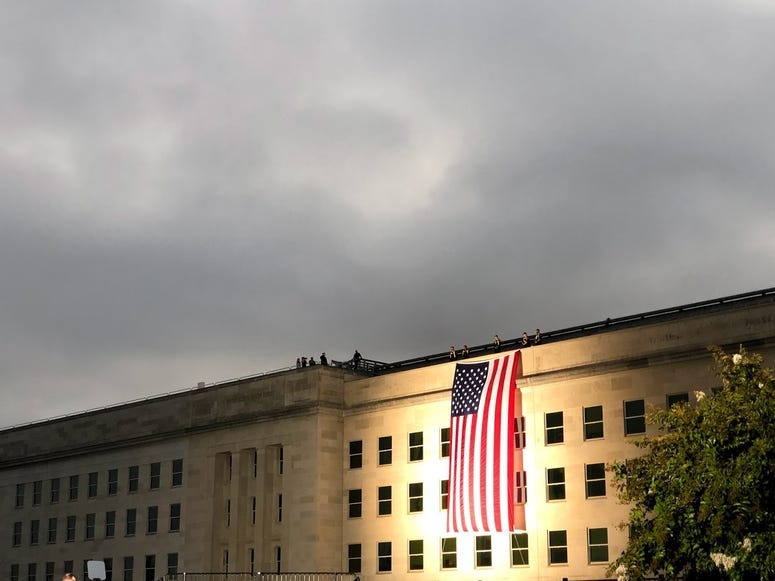 "It's an honor to join you at this sacred place where 184 men, women and children were taken from us before their time," Dunford said. "They and those lost at the World Trade Center and in Somerset, Pennsylvania were the innocent victims of an unprovoked attack. And while they were taken from us prematurely, their memory lives on."

"This morning's ceremony reaffirms our commitment to never forget that fateful day 18 years ago," Esper said. "Most of us recall exactly where we were when we first learned that our nation was under attack. Some were at work, others were at home, a number of you were present in this very building when Flight 77 crashed through its concrete walls."

"On this 18th anniversary of September 11, service members who were not even born on that day now stand among our ranks," Esper added. "As each year passes and the details of that tragic day fade, we must ensure the memories of the departed do not."

Trump recognized several of the survivors and family members present in the audience — and also shared the stories of some of those individuals who were not.

"American freedom survives only because there are patriots willing to sacrifice everything in its defense. No tribute is sufficient to convey the infinite depth of our nation's gratitude," he said. "Here on the western side of the Pentagon, we saw brave men and women rush into the fire and race into the scorching flames to rescue their colleagues. When evil seeks to do us harm, the incredible men and women of the United States military answer with unyielding valor and unstoppable resolve."

Trump also took the opportunity to illustrate what would happen if those responsible for the attacks on September 11 chose to return to the United States.

"And if for any reason they come back to our country, we will go wherever they are and use power the likes of which the United States has never used before — and I'm not even talking about nuclear power," he said. "They will never have seen anything like what will happen to them. No enemy on earth can match the overwhelming strength, skill, and might of the American Armed Forces."