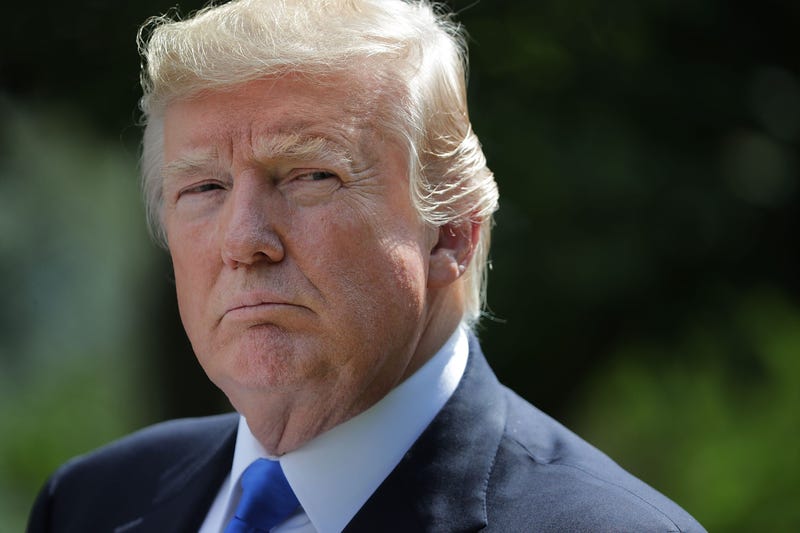 After days of protests across the country, some of which erupted into violence, President Donald Trump announced Monday that the "lawlessness ... will end now." Governors must use "overwhelming law enforcement" presence to "dominate the streets," he said.

And if they fail to do so or refuse, the president said he will "deploy the United States military and quickly solve the problem for them."

"A number of state and local governments have failed to safeguard their residents ... This is why I am taking immediate presidential action to stop the violence and restore security and safety in America," he said. "I am mobilizing all available federal resources, civilian and military to stop the rioting and looting ... to protect the rights of law-abiding Americans, including you Second Amendment rights."

It was not immediately clear whether the president was invoking or planning to invoke the Insurrection Act. He did not mention the law specifically.

Trump's remarks from the Rose Garden Monday evening came hours after reports from CNN that 200 to 250 active-duty military police were en route to Washington, D.C. from Fort Bragg, North Carolina.

The president said he had dispatched "thousands upon thousands" of soldiers to the nation's "great capital."

"As I speak, I am dispatching thousands and thousands of heavily armed soldiers and military personnel" to stop rioting, looting and "wanton destruction," Trump said, calling acts of violence and vandalism in the protests across the country "acts of domestic terror" and a "crime against God."

The Pentagon confirmed that "some active-duty service members are on a shortened alert status and are in the National Capital region, but not in the District of Columbia to ensure faster employment if necessary."

Active-duty military police are being sent to D.C. in response to protests, reports say

Trump's call for active-duty mobilization comes in addition to the already-activated 17,000 National Guard troops in 23 states in response to the protests which started last week after the death of George Floyd, a handcuffed black man, in police custody in Minneapolis.

Secretary of Defense Mark Esper and Chairman of the Joint Chiefs Gen. Mark Milley were present at the president's announcement Monday.

Over the weekend, soldiers from Fort Bragg and Fort Drum in New York were ordered to be ready to deploy within four hours if needed to respond to demonstrations in states across the country. Additionally, a source with knowledge of troop movements told Connecting Vets that the 82nd Airborne's Immediate Response Force (IRF) battalion had been alerted to prepare to deploy within two hours.