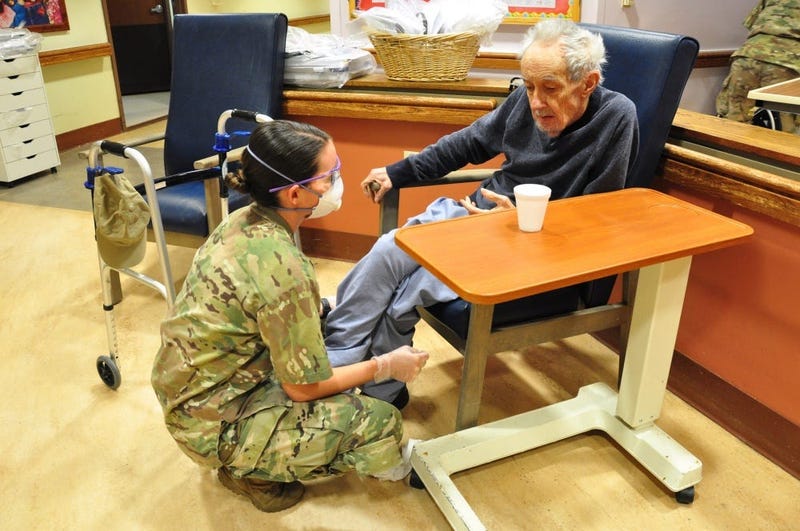 The Department of Veterans Affairs was forced to cancel more than 11 million appointments from March to June during the coronavirus pandemic, but didn't follow up on more than 3 million of those, potentially putting veterans at risk, according to a recent watchdog report.

The VA Office of the Inspector General released a report Tuesday focusing mainly on the 7.3 million canceled appointments form March 15 until May 1 and the about 2.3 million, or 32%, that "had no evidence of follow-up or tracking" which "poses a significant risk to patient care."

About 5 million of those canceled appointments from March to May, or 68%, did have some level of follow-up, which the report said "generally means the patient was able to complete the appointment virtually by telephone or video, or the appointment has been rescheduled." Some of those 5 million, though, include appointments that are still canceled but are being actively tracked in VA's scheduling system and "likely still need to be rescheduled for an in-person visit or converted" to a telehealth appointment.

VA "never closed its doors" during the pandemic, "but like most other health care providers, VA canceled most non-urgent health care appointments in response to the pandemic and in accordance with CDC guidelines," VA Press Secretary Christina Noel told Connecting Vets, adding that the report shows VA "appropriately flagged the vast majority of these appointments for follow up."

At least 1.1 million of the canceled appointments were converted to telehealth appointments by phone or video, according to the report. VA held about 2.8 million total virtual appointments in March and April, including some that had been canceled and some newly scheduled.

The appointments include "primary care, mental health care and specialty care," according to the report, and VA facilities don't have a tracking system specifically associated with the pandemic cancellations to make sure they are rescheduled.

Veterans Health Administration (VHA) leaders issued guidance to staff in March about how to track pandemic cancellations, including labeling those appointments with the keyword "COVID19." About 55% of canceled appointments from March 15 to May 1 included that label, leaving 45% without a label. This made it difficult for staff to know whether an appointment was canceled because of the pandemic or other reasons, though because of the timing of so many cancellations, " it is reasonable to infer that the vast majority were canceled due to COVID-19."

Appointment wait times recorded by VA could be questionable during and after the pandemic, the report said, after an issue related to how the department labeled the canceled appointments.

VA may have erroneously labeled some canceled appointments as "canceled by the veteran," according to the report. When VA labels an appointment as canceled by the patient, the wait time resets, the report said, which could mean that "individual and cumulative wait time data will be of questionable reliability during and following the pandemic."

VA staff said they will use cancellation dates, instead of the labels, when rescheduling to avoid missing anyone, the report said.

While VHA guidance issued March 22 directed staff not to cancel or discontinue consults, the report says that's exactly what happened to more than 500,000 consults during the period from March 22 to May 1. Consults are usually requests for specialty care that are submitted by the patient's primary care provider.

"Canceled or discontinued consults can lead to a veteran experiencing additional, undocumented delays, or in some cases not receiving care if the referring provider does not resubmit or create another consult," the report said.

By not properly tracking canceled appointments, VHA also risks that its hospitals and clinics could "lose track of patients who require follow-up for community care referrals" through the Mission Act, according to the report.

On March 20, VHA sent a memo to its medical system directors "stating that VHA requested a temporary (90-day) pause from the Mission Act standards," though it still planned to complete referrals for "urgent needs as necessary." Three days later, another VHA document said the department wasn't "pausing" Mission Act access standards, but was taking "into account whether referrals for community care are clinically appropriate" during the pandemic.

That lack of clarity could cause challenges for the department, the report said, and VHA "faces a potentially large influx of community care referrals when the pandemic subsides, as large numbers of patients return to VA for care and as facilities work to reschedule canceled appointments." That spike in demand could create future issues for VA and community care staff, the report notes.

Noel said the report "creates the false impression" that some veterans may not have gotten a follow up from VA after their appointment was canceled.

"VA follows up on all canceled appointments regardless of whether the follow up is annotated in the scheduling system," she said. "Nevertheless, out of an abundance of caution, VA has already started on a review of all appointments canceled during the pandemic."

The Inspector General recommended that VHA create a "well-defined rescheduling strategy" with all its hospitals and clinics and provide oversight to those facilities that have a "significant rate of appointments with no evidence of follow-up or tracking.

"The OIG recognizes the efforts of VHA personnel to manage the needs of patients during the COVID-19 pandemic. Avoiding nonurgent face-to-face appointments was warranted, but unfortunately increased the risk of patients not receiving rescheduled appointments," Assistant Inspector General for Audits and Evaluations Larry Reinkemeyer wrote in the report. "VA medical facilities provided some care virtually and have worked to track and reschedule canceled appointments. Despite these efforts, millions of canceled appointments must be managed during and following the COVID-19 pandemic

VHA officials said they had nearly completed a plan for managing appointments and consults, including plans to "review all appointment (and consult) cancellations and provide follow-up."