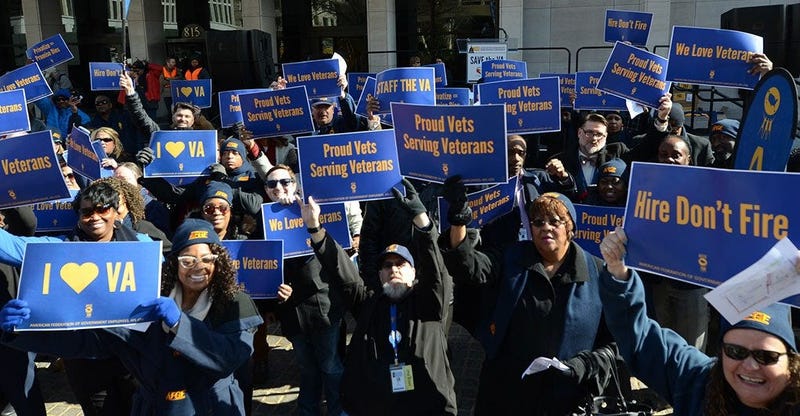 VA workers who are part of the American Federation of Government Employees union plan to hold rallies across the United States Wednesday in protest of the federal government’s contract proposal.

The AFGE is the largest federal employee union representing 700,000 federal and D.C. government workers and the group says the rallies are about “fighting the administration’s contract proposals that would turn the VA into a tyranny in which they have no say in their own working conditions and no right to hold rogue managers accountable.”

Doctors, nurses and other VA employees planned to wear red and hold more than 58 rallies, town halls, meetings with members of Congress and union fairs for the “VA Day of Action.”

“Make no mistake. This contract is a part of this administration’s open war against working people and our democratic system,” said AFGE President J. David Cox Sr. “We will not allow it.”

Contract negotiations between AFGE and the VA began May 27 and have been contentious from the start. The union says the contract proposal so far “would strip 260,000 VA employees of many of the rights and protections they’ve won through collective bargaining. The proposal is clearly an attempt to set VA employees up to fail and pave the way for VA privatization.”

VA spokeswoman Susan Carter said AFGE “has consistently fought for the status quo and opposed attempts to make VA work better for veterans and their families."

“Now AFGE is taking the same approach with its refusal to accept commonsense improvements to its collective bargaining agreement.”

But AFGE says VA management wants to eliminate the process to prevent retaliation and harassment, reduce management accountability by limiting employee grievance filing ability, ban collective bargaining over a range of currently permitted issues, restrict communication between the union and VA to the national level and otherwise limit union activities and staff rights.

Carter said the VA would reduce union time for VA/AFGE employees “from more than one million hours per year to 10,000,” streamline the hiring process, empower front-line supervisors and ensures the contract won’t interfere with VA modernization and legislative directives.

In a May 2 press release, VA Secretary Robert Wilkie said the current contract “includes many benefits that favor the union rather than the veterans we are charged with serving.”

A day later, Cox accused Wilkie of “making a mockery of the collective bargaining process to do the bidding of President Trump” to “privatize” the VA.