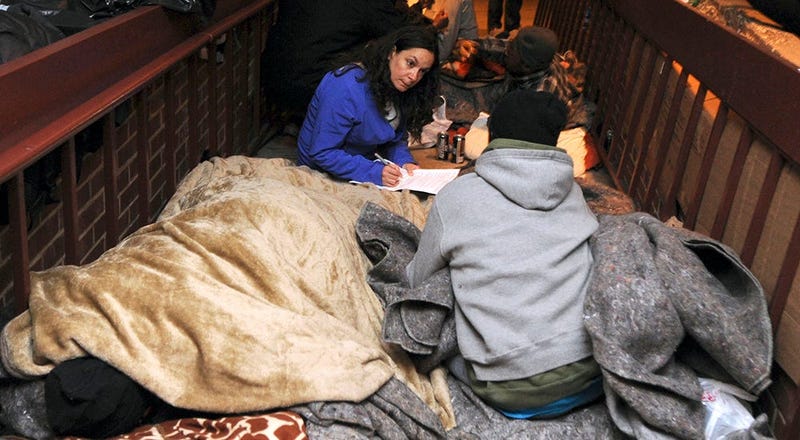 Veteran homelessness has been cut nearly in half in the last 10 years, but tens of thousands of vets remain on the streets, and a program intended to help is short-staffed and thousands of housing vouchers are going unused.

On Tuesday, members of Congress heard the story of a veteran known simply as "Mr. Brown."

Brown received an other-than-honorable discharge because of alleged drug use during his military service. Brown was struggling with his mental health but was only diagnosed after his discharge.

While Brown got help from Interfaith Community Services in Escondido, Calif., he was not able to secure housing or stable income, ICS CEO Greg Anglea told Congress. He was homeless and ineligible for help from VA because of his discharge.

For two years, Brown remained sober and got a job as a  part-time cook, but he remained homeless.

"His path out of homelessness remains doubtful," Anglea said, largely because he is not eligible for all available benefits because of his discharge. "With his current limited income, multiple disabling conditions, inability to secure disability benefits and ineligibility for HUD-VASH, he will struggle to maintain independent living without the longer-term housing subsidy HUD-VASH will provide."

Housing and Urban Development Veterans Affairs Supportive Housing program (HUD-VASH) is a program that provides rental housing vouchers and other services to homeless or at-risk veterans.

On Monday, House lawmakers passed the Veteran House Act, which aims to expand eligibility for the HUD-VASH program, including for veterans with other-than-honorable discharges like Brown.

It's estimated that about 10 percent of homeless veterans have OTH discharges and about 15 percent of all homeless vets are not eligible for VA benefits.

That bill next heads to the Senate for a vote and then the president's desk to become law.

The number of homeless veterans in the United States is down nearly 50 percent since 2010, Keith Harris, national director of clinical operations at the Veteran Health Administration, told the House Veterans Affairs Committee Tuesday. The most recent estimate showed that on a single night in January 2019, 37,085 veterans were homeless, down about 2 percent from 2018.

Since 2010, Harris said more than 800,000 veterans and their family members have gotten housing help through HUD-VASH. The program provides rental vouchers to homeless veterans or those at risk, along with case management and support.

Harris called the voucher program "one of VA's most important resources for ending veteran homelessness."

Efforts by federal and local governments and nonprofits, including HUD-VASH, have "effectively ended veteran homelessness" in 81 communities, including three states, Harris said, but thousands of vouchers are going unused because of eligibility and other issues.

"It's clear to me that HUD-VASH is working, but it could be working better," said Rep. Mike Levin, D-Calif.

"It's not enough," said Rep. Gus Bilirakis, R-Fla. "Part of the reason these vouchers aren't being used is they aren't helpful" in areas with high cost of living.

While the program has 100,000 vouchers allocated across the U.S., about 11,000 of those are not being used, "far too many," Harris said, "with over 37,000 veterans still homeless on any given night." Last year, about 8 percent of homeless people across the country were veterans.

The reasons those vouchers may go unused can include high costs of living and VA staff shortages that lead to voucher delays.

Bilirakis wanted to know why VA wasn't working to hire for the 650 vacancies, including contracting those positions out.

"There's no denying there has been significant progress nationwide in reducing homelessness among veterans ... But there is more work to be done," Bilirakis said. "We must do more. We must ensure that we have a true picture of how this money is spent."

Harris said about 5,000 veterans are being helped by contracted case managers nationwide, but contracts "can take a long time."

If those 650 jobs were filled, Harris said "HUD-VASH could house over 6,000 additional veterans."

One of the most efficient ways to reduce veteran homelessness is to "intervene when a veteran is at risk of homelessness and support them through their period of crisis," Levin said, but "we are not good enough at identifying at-risk veterans."

As part of HUD-VASH, VA provides "wrap-around services" beyond the vouchers themselves, to keep veterans on their feet, and Levin and Bilirakis agreed those services are critical to reach those at-risk veterans.

"Our goal should always be to help veterans in need find meaningful employment so they no longer need government assistance," Bilirakis said. "Veterans are a very proud people."

Legal issues are keeping homeless veterans on the street. This bill aims to help.