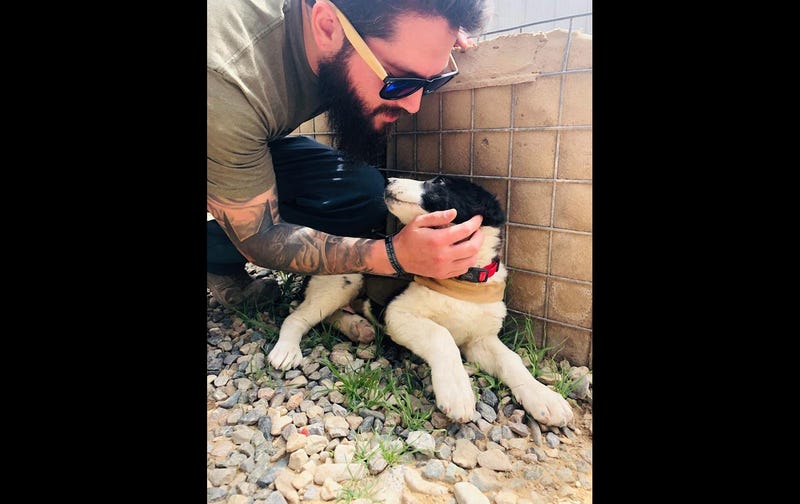 When Piggy the black and white pup was found on a military base in Afghanistan, he looked like "a guinea pig covered in blood," said Zach Knorr, the veteran who found him while stationed there.

Someone had cut off Piggy’s ears and tail, Knorr said in a Facebook post about discovering the puppy.

"He came up to me immediately and it was the happiest I've been over here," Knorr told ConnectingVets. "Every day I spent with him, I knew I had to bring him home."

Now Knorr, a base security contractor and former Army sergeant, and his sister, Nicky Urbanski, of Cheektowaga, N.Y., along with Texas-based Puppy Rescue Mission are working to bring Piggy and his siblings, Sierra and Chubby, home to the states.

“This poor little guy has had a rough start to his life, and we are in desperate need of help to give him something better,” Urbanski wrote on a GoFundMe page. “He was born as a stray in a very dangerous place overseas. My brother, Zachary, came across Piggy and a few of his siblings while working. Needless to say, he fell in love with Piggy.”

"My son is five and he loves Piggy already," Knorr said.

Anna Maria Chiasson, president and founder of Puppy Rescue Mission, told ConnectingVets the pups "are currently safe in Kandahar and we will be moving them to Kabul soon where they will be vetted and prepare for flight to America over the next month."

Urbanski told ConnectingVets that the pups are being held at a temporary shelter before they head to Kabul, where they will receive their vaccines and have to remain in quarantine for another 30 days. After that, Puppy Rescue Mission will arrange flights to get them stateside, she said.

"We do not have an estimate as to when they will be on flights home right now, but it shouldn't be longer than three months," Urbanski said. "The dogs health and safety is the main concern, so it's not easy to have anything set in stone." 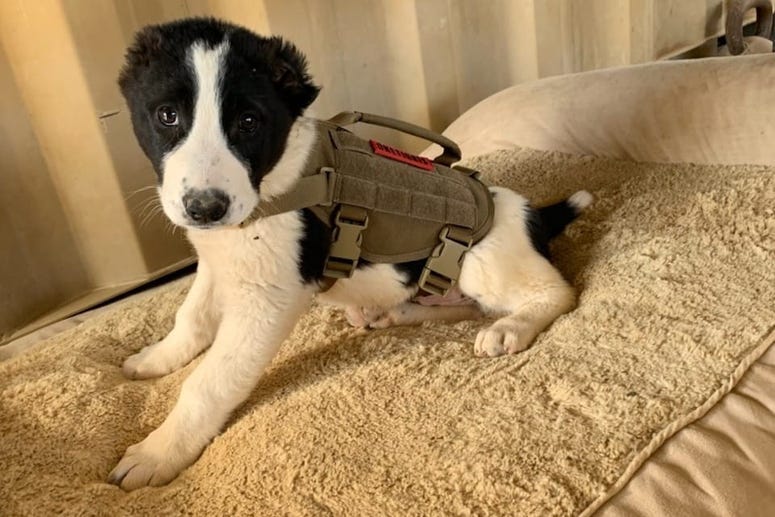 Urbanski and Knorr started the GoFundMe to raise money to transport the pups and get them cleared by a veterinarian to enter the US, “not a cheap process,” Urbanski wrote on the fund’s page. A dog returning from overseas safely can cost thousands of dollars, Pierce told ConnectingVets.

As of April 9, the GoFundMe had exceeded its $6,000 goal, raising $6,150. Piggy's sisters will have homes stateside with two of Knorr's friends also stationed in Afghanistan, he said.

"I'm hoping while I'm on leave, Piggy gets to us," Knorr said. "It's been stressful but I cannot wait to get back and have my little family going. My sister has been awesome in the whole process."

Urbanski said her brother mentioned Piggy to her in December when he first met the pup.

"I knew he was going to get attached right away, so I was a little worried what would happen when his contract ended," Urbanski said. "It started as more of a joke to try and bring Piggy home in a bag, but the more he was able to see him, the more real it became that he wanted to give him a better life.

"There obviously isn't much to look forward to in a dangerous place overseas, so Piggy has really helped to make his time there tolerable. I wanted to be the one to help make sure I could do whatever I could for my brother, but also for this poor puppy that has never known what it's like to have a home or someone love him and it took off from there. I'm excited for the both of them, and now obviously the two other pups we are able to save in the process."

After everything Piggy has gone through, “he still manages to be a very sweet and loving pup,” Knorr said in a Facebook post requesting donations. “(We’re) hoping we can provide the longest, happiest life possible for Piggy. Will you help get this gorgeous baby home to America to live with his daddy?”

Donate to the pups' care here. Follow their progress on the GoFundMe page or on Puppy Rescue Mission's Facebook page.