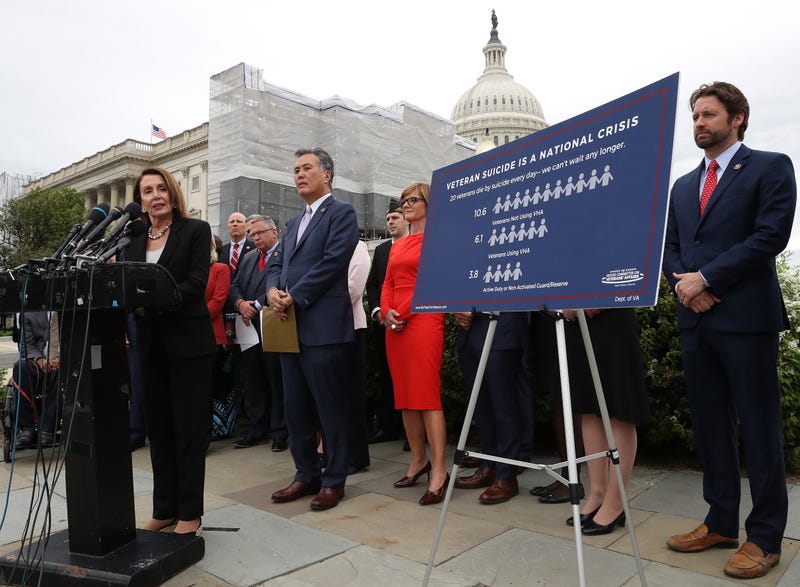 Just hours after a veteran died by suicide outside a Cleveland, Ohio Veterans Affairs Medical Center, members of Congress pressed VA leaders on what is being done to prevent those deaths.

The April 29 death was the fourth death by suicide on VA property in April -- the seventh so far this year, Veterans Health Affairs acting head Dr. Richard Stone said at a House Veterans Affairs Committee hearing that day.

Takano and other lawmakers, Republican and Democrat, said Monday’s hearing would be the first of many as Congress seeks a solution to what House Speaker Nancy Pelosi called an “uncomfortable, urgent crisis.”

The subject of veteran suicide is “the most important, most confounding and most heartbreaking one we will confront,” Roe said.

“We must confront an uncomfortable and deeply troubling truth -- VA’s current efforts and approaches to suicide prevention and mental health are not working,” said Joe Chennelly, executive director of AMVETS. “How do we know this? In the simplest of terms, the suicide numbers aren’t decreasing.”

The amount of money Congress has earmarked for veteran suicide prevention programs through the VA has increased more than 250 percent since 2005 to $9.4 billion, but the rate of veteran suicide -- about 20 deaths per day -- has remained constant, ranking member Rep. Phil Roe, R-Tenn., said Monday.

“(The VA) budget continues to increase for suicide prevention but what actual results can be seen from the funding level we’re putting out there?” said Rep. Mike Bost, R-Ill. “We’re not changing it. We’re still at that 20 (veteran suicides) a day. We have to come up with the ideas that truly change this. How do we become really effective and bring those numbers down? If we don’t change the numbers, we’re not helping.”

Stone and Dr. Keita Franklin, director of suicide prevention, said the VA has multiple initiatives to try to curb veteran suicide, including:- Screening every veteran who receives VA services anywhere for suicide risk.

- Teaching VA police officers “empathy and de-escalation” instead of focusing only on security.

- Training all employees to recognize veterans in crisis and get them the care they need.

- Creating a system to flag veteran health records if they are found to be a suicide risk.

“All of us feel those losses,” Stone said, adding that those deaths on VA property were particularly heartbreaking “with help mere feet away … Too little progress has been made.”

Rice said Congress has so far been largely unwilling to discuss guns and veteran suicide prevention. VA officials said they do work with veterans on firearms and suicide risk, including education on safe weapons storage, the dangers of keeping guns at home and also coaching gun sellers and enthusiasts to recognize the signs of a veteran in crisis.

When asked if more funding could help reduce veteran suicides, Stone told the committee “this is not a financial problem."

“I can hire another 20,000 mental health providers and the people in the VA will get great care,” he said. “This is a problem with the society we live in,” adding that the social disconnection of American society is a larger obstacle to reaching veterans at risk than VA staffing or funding.

“Is this about loneliness, isolation, being disconnected? The answer to all of these is yes,” Stone said.

Takano shared his own story of a veteran lost to suicide -- his uncle, who served in Vietnam.

“His suicide still haunts me to this day,” Takano said. “There’s no excuse for failing these veterans at home.”

“Suicide is preventable, treatment works and there is always hope,” Stone said.

Veteran suicide is a 'gut-wrenching' 'crisis,' officials say. Here’s what Congress is doing about it.