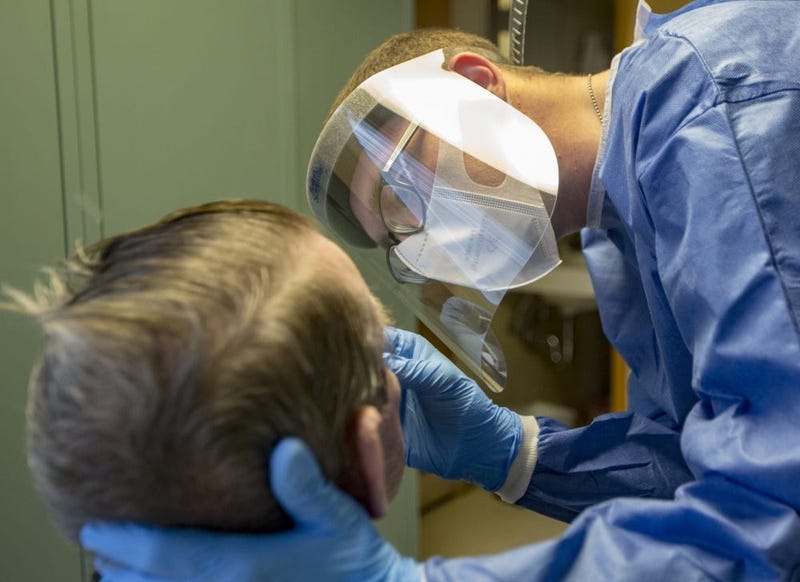 As America passes the 90-day mark since the president declared a state of emergency for the coronavirus pandemic, cases and deaths at the Department of Veterans Affairs continue to increase as the mammoth healthcare system prepares to reopen some hospitals.

"I am incredibly concerned about areas of the country heading in the wrong direction," said Dr. Richard Stone, head of the Veterans Health Administration. Stone told lawmakers he was especially worried about states such as South Carolina, Arkansas and Arizona -- areas with increasing COVID-19 cases, including hospitalizations and said those areas are "informing every day's actions" at VA facilities in those areas.

And on-demand testing is not available for all veterans at all VA facilities, Stone said.

House Veterans Affairs Committee lawmakers specifically asked for a commitment from VA that any eligible veteran who showed up to a VA facility and wanted a test could get one. VA leaders including Stone and Dr. Larry Mole, director of VHA's office of public health, said the department could not commit to that yet because it does not have enough tests nationwide.

VA, like other healthcare systems, has seen shortages of test elements, such as swabs. Stone said VA is processing about half as many tests as its labs can handle because of a lack of those testing parts.

Rep. Max Rose, D-N.Y., called it "a national embarrassment" that VA is not completing more tests for veterans and staff because of a lack of "glorified Q-tips." VA officials told lawmakers they are expecting shipments of millions more swabs and other test elements soon and Stone said the department is "improving every day."

"Many states are seeing spikes and hotspots continue to exist," Chairman Rep. Mark Takano, D-Calif. said, raising concerns about state capacity to care for COVID-19 patients, a second wave of the virus and possible natural disasters as the nation enters hurricane and wildfire seasons.

Members of Congress were also particularly concerned with a growing backlog of healthcare appointments and disability claims caused by millions of canceled appointments and exams during the pandemic.

VA canceled at least 5.7 million healthcare appointments during the pandemic. Though many of those were switched to telehealth or remote appointments online or by phone, Stone said about 40 percent -- about 2.3 million -- will need to be rescheduled and VA was working on reaching out to veterans now.

"That will need to be well-managed to limit wait times, fairly prioritize care to those most in need and ensure that no veteran falls through the cracks," said ranking member Rep. Phil Roe, R-Tenn.

As VA looks to resume normal operations at some of its 175 hospitals and more than 1,000 clinics nationwide, testing and personal protective equipment are also a concern, lawmakers said.

"It remains to be seen whether VA’s current testing capabilities are sufficient to meet the demand for tests from veterans and employees, particularly as more and more VA medical centers reopen,” Roe said.

VA frontline medical staff continue to report a lack, or shortages and rationing, of personal protective equipment (PPE) such as masks, gowns and gloves at VA hospitals across the country. VA officials spent months denying those accounts and calling them "false allegations" while internal VA memos showed rationing. VA leaders said shortages have been addressed and all staff should have the PPE appropriate for their jobs.

VA, through the Mission Act, has a network of private healthcare providers it can send veterans to for care. But during the pandemic, about 60 percent of those doctors were not available "for anything but urgent work," Stone said.

Now, VA is going region by region to evaluate what care it can begin offering again, according to its reopening plan, including 20 sites it picked to begin resuming normal operations.

"This is about prioritizing care, making sure any urgent or time-sensitive issues are cared for," Stone said. "It's our job to reach out and erase that backlog."

Another major concern is the mental health toll the pandemic may take on Americans, especially veterans, as unemployment continues to rise and the threat of homelessness increases. Experts warned late last month that veteran suicide risk could increase even as the pandemic diminishes.

Stone warned lawmakers that "some of the highest suicide rates in this nation followed the second wave of the 1918 pandemic" and said the stress of COVID-19 "on all generations of the American public" will need to be handled.

Stone was asked to speak about how he personally has been affected by the pandemic. He revealed that his 18-year-old son contracted the virus, but is recovering.

He "literally could not get out of bed for two weeks," Stone said, though he recovered with help from hydroxychloroquine, which he said was "anecdotal" and assured lawmakers he was not making any official decisions based on his son's treatment. VA has come under fire in recent months for its use of the drug to treat COVID-19, which leaders said they have reduced the use of considerably.

'We're not there yet' with COVID-19 tests for staff, VA leaders tell Congress