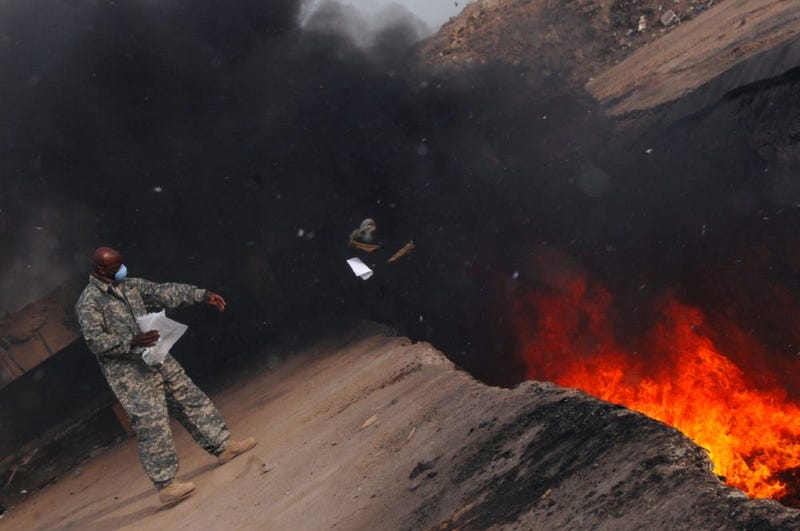 The United States is approaching nearly 20 years of war in Iraq and Afghanistan and the Global War on Terror and 30 years since the Gulf War. But the Department of Veterans Affairs is still denying close to 80% of all burn pit related claims veterans file.

More than 50% of those were denied because of lack of evidence linking their conditions with exposures.

Under current policy, veterans who sicken after being exposed to toxic hazards during their service must prove that their illnesses were caused by those exposures unless VA considers the illness a "presumptive."

But adding illnesses to VA's list of presumptive conditions -- those health concerns VA or lawmakers have decided are "presumed" to be caused by military service -- is difficult, at times complex and often costly, making progress to expand the list arduous. And in Washington, cost has been the death knell for previous legislative efforts. So far, VA only recognizes temporary health effects related to burn pits, including respiratory, skin, eye and gastrointestinal tract irritation.

More than 213,000 veterans and troops also have added themselves to VA's Burn Pits and Airborne Hazards Registry, but that registry is entirely voluntary, and officials and advocates have repeatedly said that it doesn't come close to reaching the total number of those affected. VA estimates as many as 3.5 million veterans may have been affected by burn pits and other airborne hazards during service.

Lawmakers were visibly frustrated with VA officials during a House Veterans Affairs subcommittee hearing over what they said has been a lack of progress in caring for veterans sickened by exposure to burn pits and other toxic exposures.

Members of Congress wanted assurances from VA that the more than 40 years taken to provide many Vietnam veterans care related to Agent Orange exposure, would not be repeated.

"We may not have all the answers on burn pit exposure, if ever," Rep. Elaine Luria, D-Virginia, said. "What we do know is that it's making people very sick. I can't tell these people to sit down to wait another 10 years because, quite frankly, some of them might not have another 10 years."

"We don't want to see a 40-year wait like we did with Agent Orange," said Chairman Mark Takano, D-California.

VA officials tried to reassure lawmakers that the department would not make the same mistakes again.

"No, it's not going to take 40 years," said Dr. Patricia Hastings, deputy chief consultant on post-deployment health services at the Veterans Health Administration. "We have learned lessons."

But it has been nearly two decades since the terror attacks of Sept. 11, 2001 launched massive American troop deployments to the Middle East and Southwest Asia where more than 200 burn pits blazed at the height of the conflicts -- filled with human waste, electronics, ordinance, medical waste, jet fuel and more. It's been more than 30 years since the Gulf War, where veterans say burn pits were also used.

"We don't want to repeat the past," said Rep. Mike Bost, R-Illinois. "Unfortunately, VA keeps coming back with answers of 'Oh, well, we're not sure' and everyone else in the world is sure."

"My goodness, they came in healthy and they're leaving sick," said Rep. Gus Bilirakis, R-Florida. "They need to be treated by the VA ... These people don't have time and their families are suffering for it as well."

VA officials argued that the department can't make decisions to provide care or disability compensation for veterans without evidence proving that their military service and exposures caused their illnesses, especially for conditions that may not manifest for many years after service. That has often been the case for veterans who sicken from Agent Orange, burn pits and other toxic exposures.

"Some of the challenges are finding the link between that in-service event and the current condition they have," said Laurine Carson, deputy executive director for policy and procedures at the Veterans Benefits Administration. "We're still in the process of studying that."

But veterans, their families, advocates and lawmakers have grown increasingly frustrated with VA over what they've called "excuses" that lead to delays, or outright lack of care.

Rep. Raul Ruiz, D-California, who is also a doctor, argued that it's often practice in the medical field to act on "a high enough probability, or suspicion, of harm."

Ruiz, who has sponsored several pieces of exposure-related legislation, said VA "claims to lack sufficient data" to provide care or compensation, but there is "independent research that raises high probability, or high suspicion of a causal link" between these exposures and veterans' illnesses.

"Our veterans cannot afford to wait for ... the perfect study," Ruiz said. "We have all the evidence to remove the burden of proof from veterans."

Ruiz called exposures that cause illnesses in veterans a "self-inflicted wound" by the Pentagon.

"How can we send troops overseas to keep America safe and then turn our backs on them?"

To that end, lawmakers have introduced several major bills this Congress aimed at providing health care and compensation to veterans sickened by their exposures. One of those, the Toxic Exposure in the American Military (TEAM) Act, creates sweeping mandates for VA to further research, track and care for eligible veterans who fall ill because of exposure to toxic substances during service -- perhaps the most comprehensive legislation on military toxic exposures ever introduced in Congress. The TEAM Act was approved by the Senate Veterans Affairs Committee during the House hearing and now heads to the Senate floor for a vote, Chairman Jerry Moran, R-Kansas, announced. Another bill introduced last week would establish presumptive conditions for burn pit exposure.

VA officials said they were reviewing a recent report from the National Academies of Sciences, Engineering and Medicine that found limited evidence of a link between service in the Gulf War and Southwest Asia after 9/11 and "chronic persistent cough, shortness of breath and wheezing" but found "insufficient evidence" to prove veterans' respiratory illnesses are caused by burn pit and other airborne hazard exposure. That report analyzed only evidence on respiratory illnesses and exposures, though veterans report other conditions including cancers.

That includes veterans like 29-year-old Marine Pat Duva, dying of a rare brain cancer he and his family believe was caused by his exposure to burn pits in Iraq. His fiancee Chelsea told Connecting Vets on Wednesday that Duva was still hanging on.

"He's a fighter," she said from his bedside, holding his hand.