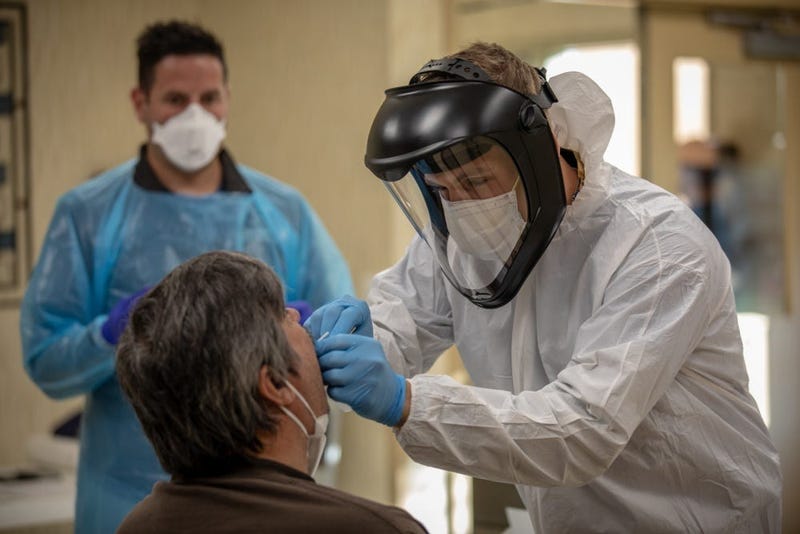 Veterans have been denied benefits during the coronavirus pandemic because their compensation and pension exams at the Department of Veterans Affairs have been canceled, advocates told Congress May 27.

A backlog of compensation and pension exams is growing -- with more than 230,000 delayed during the pandemic so far -- and VA has yet to communicate its plan to address that backlog, lawmakers and advocates said during an online forum held by the House Veterans Affairs Committee.

"The abrupt pause to the process has left some veterans to wonder when and how their claims will move forward," Rep. Elaine Luria, D-Va., said.

One day after the forum, VA announced that in-person exams would begin to resume at some of its hospitals.

No one from VA was present for the forum Wednesday, and lawmakers were critical of the department's absence.

"VA's insight is critical if we are to determine the best way forward on this issue," said Rep. Mike Bost, R-Ill.

"VA needs to show leadership in the midst of this crisis by showing preparedness," said Committee Chairman Rep. Mark Takano, D-Calif., adding that the numbers of backlogged claims "are alarming, but that doesn't mean we can rush back to normal operations without a plan in place" and that plan should address the "mounting backlog without sacrificing quality."

Beginning in early April, VA began canceling compensation and pension (C&P) exams or transitioning them to telehealth by phone or online.

That was several weeks after President Donald Trump instituted a state of emergency for the COVID-19 pandemic, and followed state and local governments enacting stay-at-home orders. Some veterans already had canceled their exams for their safety or had their appointments canceled by contracted providers.

But some of those veterans would later be denied benefits by VA, told they were no-shows for their exams and that without an exam, there was no evidence for their disability claims. This was despite VA's own directive not to deny any claims because of the pandemic. Since late March, more than two dozen veterans have contacted Connecting Vets to say their claims had either been denied or partially denied because of canceled or delayed exams.

VA officials said the department is working to review wrongly denied claims, but Matthew Doyle, Veterans of Foreign Wars national legislative service associate director, said the veterans VFW is working with are being required to file supplemental claims or go through higher-level reviews.

"We need to provide veterans with more choice of how their exams are scheduled" or allow them to cancel their appointments without penalty, Doyle said.

VA also recently removed the decades-long practice of providing a 48-hour review period for veteran service organizations to help veterans review their benefits decisions for accuracy before they're finalized.

Government Accountability Office representative Elizabeth Curda said VA has been on GAO's "high-risk list since 2003" in part because of wait times for disability claims.

VA kept thousands of veterans' appeals in boxes, file cabinets instead of processing them, report shows

That backlog is further complicated this year, with the addition of Blue Water Navy Vietnam veterans now allowed to file disability claims after decades. VA Secretary Robert Wilkie delayed VA's processing of those claims until Jan. 1, 2020.

Luria said estimates show that without any changes, the number of pending benefits claims could reach more than 1 million by December 2020.

About two-thirds of all VA C&P exams are conducted by contractors instead of VA medical staff. In September, officials told lawmakers at least 61 percent of exams were completed by contractors, some of which were overloaded with exams before the pandemic.

Richard Loeb, senior counsel for the American Federation of Government Employees, one of the largest unions representing VA employees, accused the department of "essentially a desire to outsource" the exams to private providers. Loeb said many of the contract providers do not have experience treating veterans.

Lawmakers were frustrated with a lack of communication with veterans about plans to address the backlog or begin rescheduling exams.

Derek Fronaberger, director of government affairs for Wounded Warrior Project, said "we haven't really been able to broach that subject on when" VA will open up in-person exams again, or, if veterans have issues with that, "what those options are. There are definitely a lot of questions ... the sooner we can figure that out the better."

Doyle said VFW "haven't heard much" from the Veterans Benefits Administration and encouraged VA to "engage in a more open dialogue with VSOs so we can keep our members and the veteran community at large informed."

"We should not allow a single veterans' claim to fall between the cracks," Luria said. "With veterans' lives at stake, I think VA needs to clearly communicate."