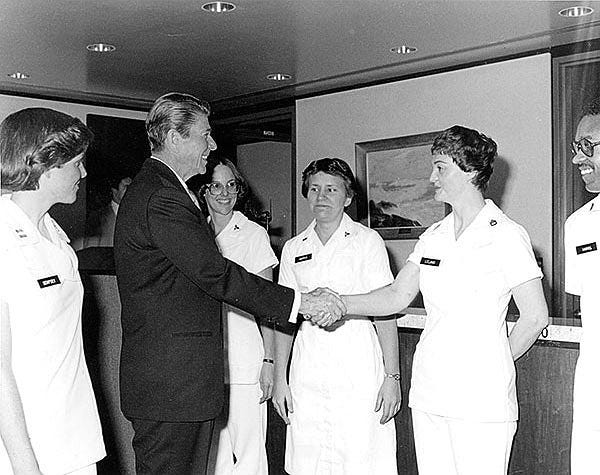 By Elizabeth Howe and Abbie Bennett

President Donald Trump was admitted at Walter Reed National Military Medical Center Friday evening, hours after announcing that both he and First Lady Melania Trump had tested positive for COVID-19. The unannounced visit is "out of an abundance of caution" according to White House Press Secretary Kayleigh McEnany.

The president left the White House Friday evening, walking to Marine One on his own, "without any outward sign of trouble," according to pool reports. Walter Reed is about 8-9 miles from the White House.

Presidents have visited Walter Reed for years -- in fact, the hospital was originally designed to provide medical care exclusively to military personnel and presidents.

Walter Reed General Hospital opened its doors on May 1, 1909. World War I saw the hospital's capacity grow from 80 patient beds to 2,500 in a matter of months. Through World War II, Korea, and Vietnam, the facility treated hundreds of thousands of injured American soldiers. The facility, originally built in Washington, D.C., moved out of the city and merged with the National Naval Medical Center in Bethesda in 2011. It was then rechristened the Walter Reed National Military Medical Center.

Walter Reed medical staff also deploy with service members around the globe. In 2003, more than 1,000 of Walter Reed's medical staff members deployed on the USNS COMFORT serving in the Persian Gulf during OIF/OEF. They performed more than 500 surgical procedures in less than four weeks. Since then, NNMC has treated 1,539 service members, contract civilians and media personnel wounded in Operations Iraqi Freedom-Enduring Freedom.

Over the years, Walter Reed has served and cared for every president of the United States, members of Congress and the Supreme Court, and other leaders. In 1977, the original Naval Medical Center tower was designated a historical landmark and entered into the Registry of Historic Places by the U.S. Department of the Interior.

Presidents and vice presidents are typically treated at the Medical Evaluation and Treatment Unit (METU) at Walter Reed, in a separate, private METU suite specially equipped for their use, according to the memoir of Rear Admiral Connie Mariano, who served as the director of the White House Medical Unit for presidents George H.W. Bush and White House physician for Bill Clinton.

The presidential suite is "specially outfitted with protective devices and communications gear used in support of the president," Mariano wrote in her 2010 book, "The White House Doctor." That suite was re-established following the merger of the NNMC and Walter Reed in 2011 and is about 3,000 square feet, including office space, a conference room, sitting room and bedroom.

The specially outfitted suite should allow the president to continue his official duties largely uninterrupted. As of Friday morning, the White House reported that he has experienced "mild symptoms" of COVID-19 thus far, including a fever, cough, congestion and fatigue.

High-ranking military leaders who were recently in close contact with Trump, such as Secretary of Defense Mark Esper and Chairman of the Joint Chiefs of Staff Gen. Mark Milley, have so far tested negative for the virus.