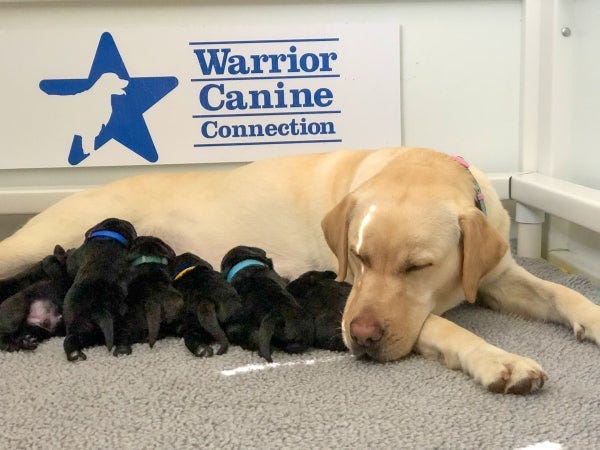 Is there anything better than puppies and World War II veterans?

The aptly dubbed Operation Overlord litter has been named in honor of some of the heroes of D-Day by Warrior Canine Connection.

They were born to Skye on June 24. Some of the veterans they’ve been named after include; Guy Whidden, a paratrooper in HQ Company, member of the 101st Airborne Division, and recipient of the Purple Heart; Wilbur Williams, who served on the USS Jeffers throughout the war and assisted in the invasions of Normandy, Sicily, Southern France, and Okinawa; and Don McKee, who was part of the 29th Infantry Division, 175th Regiment and the recipient of two Purple Hearts and a Bronze Star. 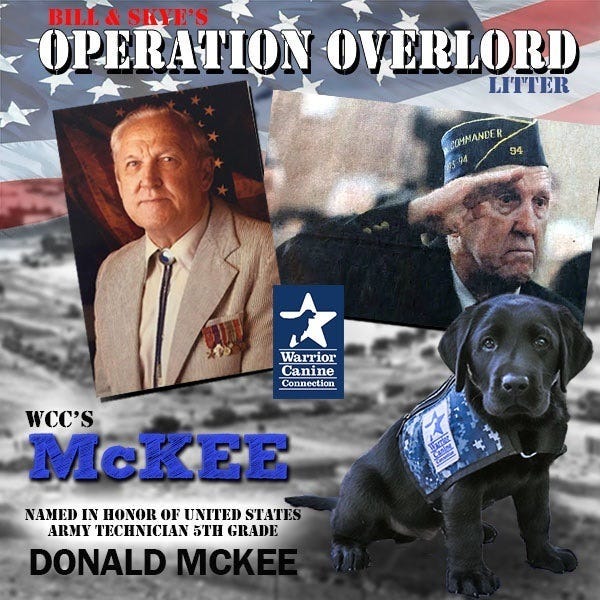 “I am happy to share my name with this pup," said Don McKee. “It was a big, big surprise and I really appreciate it.”

McKee, an Army Technician 5th Grade, decided to put his college education on hold and enlist in the Army during World War II.  The combat medic was assigned to the 29th Infantry Division. On D-Day, the boat he was on was delayed at the beach due to weather and other factors. McKee made it ashore the next day. He was wounded at Normandy and during the Battle for Brest. Following his recovery, he returned to full active duty and went on to serve as a combat medic in the Philippines.

For his service, McKee earned two Purple Hearts and a Bronze Star.

McKee said the litter’s name and each puppy serves as a reminder about what occurred on D-Day 75 years ago.

“In the last five to 10 years, the number of people in the U.S. with the knowledge of what happened back then is dwindling, and this is an important way to keep those memories alive,” he said. 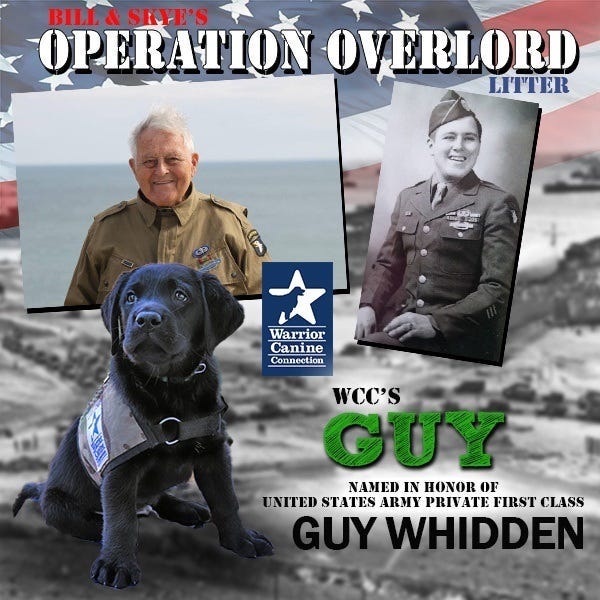 Guy Whidden enlisted shortly after Pearl Harbor and on D-Day was serving as a paratrooper with HQ Company, 502nd Parachute Infantry Regiment. He said he had a rifle strapped to his leg and a prayer book in his pocket when he parachuted onto French soil.

“When we got to the Channel, just before France, we went up about 1,400 feet and then we got the signal,” he recalled. “We all stood up and hooked up. It was like a roller coaster. From 1,400 feet, you’re going down gradually. And by the time we started jumping out the plane near Sainte-Mère-Église, we jumped at 300 feet.”

Upon hitting the ground, Whidden was knocked out by a parachute carrying supplies. When he came to, he found himself in the midst of battle.

“It was dark and planes were crashing and everything. And then everything would light up like the Fourth of July, and then it was dark again,” he explained. “Our mission was to go to Utah Beach and knock out the guns along the beach there, so that when the troops came in six hours later, around 6:30 a.m., they’d have less of a problem. We were fighting Germans the whole time. Germans were all mixed in with us. You’d be surprised just how close we were together.”

He remained in Normandy for the next 35 days, carrying out a mission with his company that eventually led to the liberation of Western Europe.

Three months later, Whidden found himself parachuting into Holland during Operation Market Garden.  While fighting near Best, he was severely wounded by a German mortar attack that killed three of his best friends and nearly resulted in the loss of his leg.  After his recovery, Whidden was sent back to Fort Benning, where he became a jump school instructor.

Whidden was awarded the Purple Heart, the Combat Infantryman’s Badge, the Netherlands Orange Lanyard, and the Good Conduct Medal.

According to WCC,  when the pups grow up, they will support veterans with visible and invisible combat wounds.

Way to go, Mr. Wiggles! Check out these 13 service dogs who just graduated

Vets can find forever love in California for free in 2020