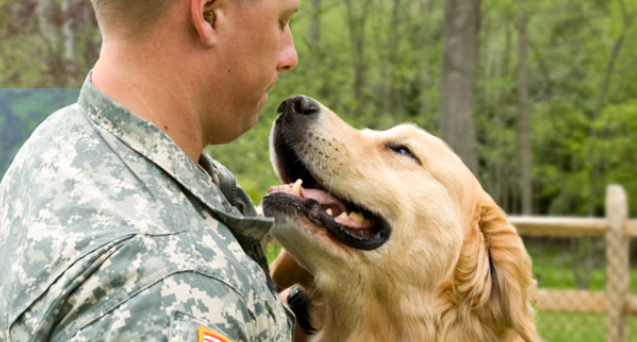 Who better to train service dogs for veterans than other veterans?

That's exactly what Warrior Canine Connection does. Since the beginning of its mission in 2011, 4,000 service members — many struggling with symptoms of PTSD — have helped train puppies to eventually serve as service dogs.

And the best part? They have live puppy webcams so we can all get in on the therapeutic benefits that dogs have to offer.

Founder and executive director Rick Yount has been working in animal-assisted therapy since the 1980's — but he says he fell into the field kind of on accident thanks to a manipulative Golden Retriever puppy.

"I was subsequently trained by a very manipulative Golden Retriever puppy that if I didn't take him to work soon he was going to certainly die, judging by the look he would give me at the door," Yount said.

The day Yount finally caved and brought the 4-month-old pup to his job with Child Protective Services, he had to go pick up an 11-year-old boy and relocate him from his mother's home to a foster home.

"The sobs were heartbreaking," Yount said. "But a few miles into it, it went kind of suddenly silent. I looked in my rearview mirror and saw this 4-month-old pup with his head in this little boy's lap. That's how I completely fell into this field of human-animal bond and animal-assisted therapy."

Decades down the road, Yount has developed his belief in those therapeutic powers into Warrior Canine Connection.

"There's so much science out there that says it actually changes your body chemistry and releases an anti-stress hormone," Yount explained.

And you don't have to actually be with the dogs to get those therapeutic benefits. The Warrior Canine Connection webcam has the same effect.

"It was amazing — a social psychology phenomenon. The year we launched the webcam there were 5.5 million views. They had to add extra servers," Yount said. "And watching the cam has therapeutic effects. We've had doctors in medical facilities tell us that patients started watching the puppy cam on their laptops, and it's made a huge difference in their attitudes."